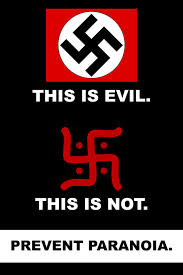 Washington, April 24 (IANS) The George Washington University is preparing to ban from its campus an important Hindu religious symbol – the swastika – because it resembles the Nazi symbol and may hurt the sensibilities of some students, a media report said Friday.

The director of the Office of Student Rights and Responsibilities and dean of student affairs will soon hold a hearing in the matter, according to a guest post in www.valuewalk.com.

However, many, including the university’s public interest law professor John Banzhaf, are not amused.

“It is like banning the 6-pointed Jewish Star of David because some people might mistake it for the pentagram symbol and human sacrifice, or expelling a student for using the word ‘niggardly’ because other students may mistake it for a racist word and get upset,” Banzhaf was quoted as saying.

Banzhaf, in a legal memo to key campus officials, has suggested that the university and its president may already be liable for defamation and other civil torts.

However, within hours, all was explained, the student withdrew his complaint and said he had nothing to fear, and the campus police discontinued their investigation, read the post.

The university has seemingly taken the position that posting anything which could be mistaken for a Nazi swastika – even if it is of a different colour and orientation, and/or might be seen as “rotating” in the opposite direction – cannot be displayed on campus, even by students who are Hindus or Buddhists.

This effective banning of a sacred religious symbol, simply because it may look like something else, seems to be unprecedented.

“Banning one religious symbol – and even things that look something like it – while freely permitting the display of other religious symbols, would seem to be a clear violation of the DC Human Rights Act which prohibits discrimination based upon religious beliefs,” said Banzhaf.