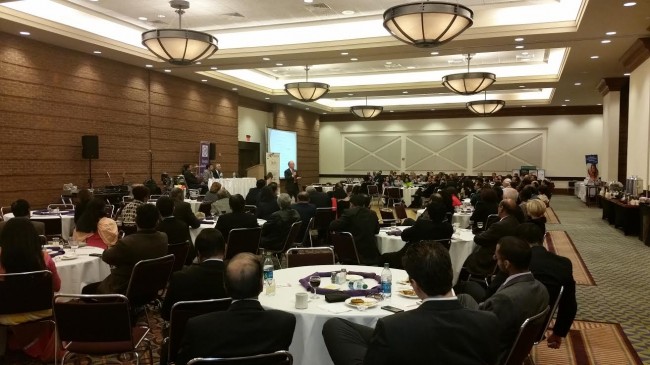 Atlanta, GA: Georgia Association of Physicians of Indian Heritage (GAPI) held its Columbus regional meeting on February 7 at the Columbus Georgia Convention & TradeC enter. Dr Piyush Patel, past president of GAPI, spearheaded the event which was co-hosted by Medical Association of Georgia (MAG), Columbus Fort-Benning Association, Muscogee County Medical Society, and Georgia chapter of Association of Physicians of Pakistani Descent of North of North America (APPNA). More than 150 attendees from Columbus and neighboring cities participated in this meeting which provided ample education and entertainment.

The GAPI board meeting was presided by GAPI President Dr. Indran Indrakrishnan and the participants were the executive committee, past presidents and board of directors – Drs. Manoj Shah, Naresh Parikh, Asha Parikh, Sudha Tata, Piyush Patel, Raghu Lolabattu, P.H. Patel, Vijay Maurya and Mahesh Patel. The upcoming annual convention and the election of new officers were some of the issues discussed. 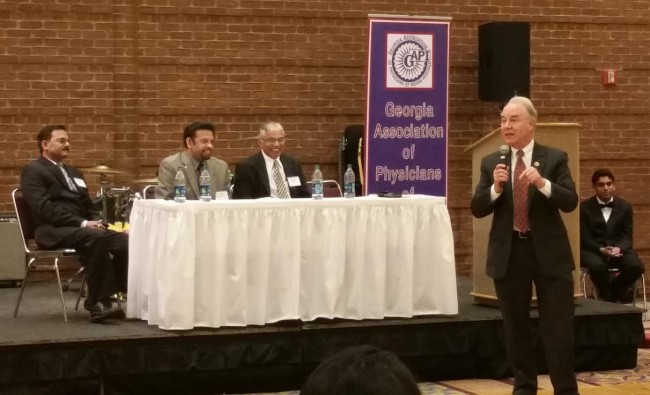 Tennent Slack, M.D, a pain management specialist and the co-chair of the Medical Association of Georgia Foundation’s ‘Think About It’ campaign gave an interesting topical presentation titled “Prescription Opioid Overdose Epidemic”.  He briefed the attendees about narcotic use in the USA and the ways to be familiar with the database started in Georgia to track patients who use narcotics and schedule II meds.

The Chief Guest, Congressman Dr. Tom Price, chair of the budget committee in Washington D. C., in his keynote address, elaborated on the current difficult issues faced by physicians and patients under the current healthcare system.  He explained the steps that he and his colleagues are working on to provide better healthcare and discussed the future of the health care insurance coverage. Senator Tom Price spent plenty of time meeting with the physicians individually and in groups discussing about their current needs and shortcomings in taking care of their patients. Dr. Indrakrishnan commended the Senator on his astuteness in healthcare issues and for acting as a voice for physicians and patients in Washington DC. He presented a book titled ‘Hindu Temples in North America- A Celebration of Life’ to Congressman Tom Price on behalf of GAPI.

The guest of honor was current MAG president Dr Manoj Shah. He is the first individual of Indian origin to have the leadership role as MAG President and is also a past president of GAPI. He updated the gathering on the recent accomplishments of MAG working together with American Medical Association. He also talked about marijuana for research purposes like epilepsy, prescription authority for hydrocodone by mid level providers, and pharmacists prescribing vaccines. He informed that Medicaid has been paying Medicare rate for the last two years as a result of Affordable care act and MAG is working to make sure that State of Georgia continues to do so. Dr. Indrakrishnan appreciated Dr. Shah’s exemplary leadership and selfless service and dedication to GAPI and honored him with a plaque on behalf of GAPI.

Dr. Indran Indrakrishnan also thanked and congratulated Dr Piuysh Patel for organizing the meeting. He further apprised the audience of GAPI’s educational, philanthropic, humanitarian, political, entertaining and social activities in the last one year in Atlanta and other regions ofGeorgia. He reminded the members about the upcoming Warner Robins Regional meeting on March 7th and GAPI annual convention on May 2nd 2015.

Dr Naresh  Parikh, current  AAPI secretary and past GAPI president spoke  about AAPI’s  vision  and achievements, and about the Global  Health Summit held in Mumbai early this year on traumatic brain injuries.

Young Sharvil Patel of Columbus High school and a potential future GAPI member emceed the event.  A scrumptious dinner with both American & Indian dishes was served at the end of the meeting. Scintillating live music and entertainment was provided by Harbor Band of Columbus during dinner.