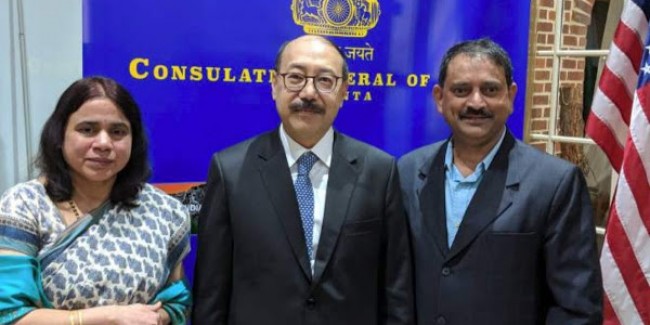 Washington, Feb 1 (IANS) The 130 students arrested so far in a “pay-to-stay” sting operation using a fake university face only civil immigration charges, according to media reports.

“We have arrested 130 foreign nationals on civil immigration charges,” Immigration and Customs Enforcement (ICE) spokesperson Carissa Cutrell was quoted as telling the Detroit Free Press on Thursday. She added that more of them could be arrested.

Those students who knowingly participated in scam knowing it was not a genuine academic program face deportation.

Eight people who allegedly ran the scam as recruiters of the students face criminal charges of conspiracy to commit visa fraud and harboring aliens for profit and face maximum sentences of five years, according to the ICE service.

Documents filed in court by federal prosecutors said as many as 600 students were enrolled at the fake institution, University of Farmington, set up by immigration officials for the sting operation to catch student visa fraud.

Prosecutors called it a “pay-to-stay” scam because the students paid the recruiters to get documents from from the fake university to enable them to stay on in a student visa without attending classes.

Court documents show that the recruiters were paid between $5,000 and $20,000 at meetings with Homeland Security Investigations agents involved in the university for recruiting the students.

Shiva Kumar, the chairperson of SEVA, the American Telugu Association’s legal assistance program, told IANS that they were working with the affected students to provide them help.

He said that he had met India’s Ambassador Harsh Vardhan Shringla in Atlanta on Wednesday, to ask for help for the students.

The Detroit News said that six alleged recruiters, who were arrested locally, were produced in a local federal court on Thursday wearing ankle chains and handcuffs.

Federal Magistrate Judge David Grand ordered them held without bail. On Monday the court will hear lawyers’ arguments on whether they should be jailed pending their trial.

The two others arrested elsewhere are expected to brought to Detroit.

The federal prosecutor in Detroit, Matthew Schneider, said in a statement: “We are all aware that international students can be a valuable asset to our country, but as this case shows, the well-intended international student visa program can also be exploited and abused.”

The students had come to the US on legitimte student visas, but did not fulfill the condition of attending universities for the required classes making their continued stay illegal, which would be compounded if they worked.

Many of the students enrolled in the university were students who had transferred from other universities, according to media reports.

ICE, which carried out the operation, admitted in a press release that it had set up the private university run by undercover agents.

Farmington University had a web site as well as Facebook and Twitter accounts – but did not have a campus or faculty.

ICE said that the alleged recruiters facilitated hundreds of foreigners to illegally remain and work in the US by enrolling in the fake university without the intention of attending classes.

“All participants in the scheme knew that the school had no instructors or actual classes,” ICE said.

Sting operations are used quite frequently by US law enforcement officials, who sometimes create fake institutions to create a sense of credibility.

University of Farmington is the second fake institution of higher learning created by law enforcement to catch student immigration scams.

Although the latest arrests came during a period of heightened immigration enforcement under President Donald Trump, Farmington University was set up in 2015 by Democratic President Barack Obama’s administration.

Obama administration officials had also set up the other fake institution, the University of North Jersey, and ensnared over 1,000 students, most of them from India and China, in 2016.

Twenty-one people who acted as student visa brokers were arrested in that sting.

The Detroit News reported that Michigan state allowed Farmington University in 2015 to conduct business after confirming it had “demonstrated plans to provide housing space, administration facilities, labs, a library and other teaching facilities”.

But the News said it had none of the facilities and operated out of a single office suite in the basement of an office building.

Its president was a fictional character named Dr. Ali Milani, the News reported.