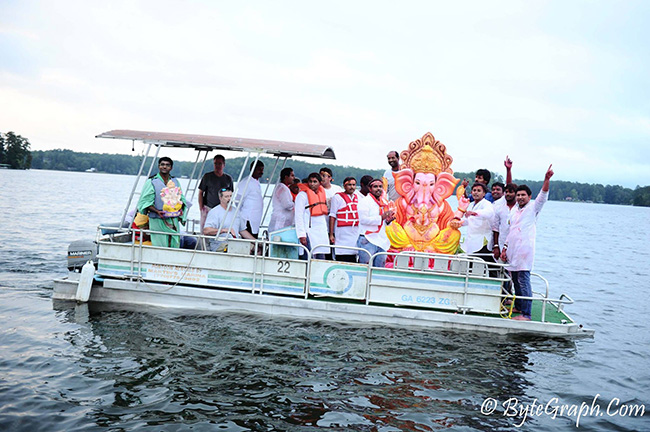 BY MAHADEV DESAI
Photos by Bytegraph Creations and Neelamegam Subramanian

Atlanta, GA: The Hindu Temple of Atlanta in Riverdale,Georgia, (HTA) organized its annual 11-day Ganesh Utsav from September 16 to 26, 2015, which attracted hundreds of devotees from Atlanta, and neighboring places as far as Phoenix,Pennsylvania,Florida, etc. As in the previous year, the majestic nine feet Ganapathi idol was specially made in Hyderabad for the Hindu Temple and gracefully installed in the specially built canopy between Balaji and Shiva temples for the celebrations. 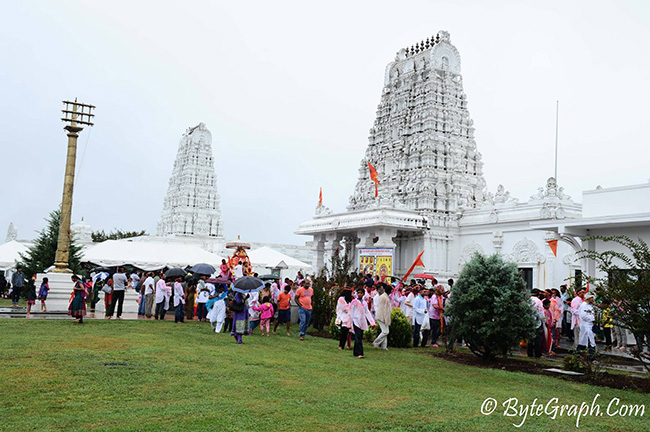 On Sunday, September 13, The HTA conducted the Ganesha making workshop for kids with help from Hindu Swayamsevak Sangh (HSS) volunteers Radhika, Nanda and Shailendra.  HTA supplied materials and instructions to over 1000 kids to make environmentally friendly clay Ganeshas. Families enjoyed a day of creating their own images and designing their very own personal Ganesha. The puja for these handmade Ganeshas was performed on September 19th.

This year, many Indian organizations came together to take an active part in volunteering and also provided cultural performances and entertainment lasting daily for about 12 hours. These presentations were emceed with verve by Vikas Anand Goyal, Srivalli Daruri, Vaisheshi Jalajam, and Gayathri Jattipatti.

Youngsters from noted Music and Dance Academies out performed each other with their devotional and classical music and dance performances. Some performed solo and some in groups, facing the idol of Lord Ganesha. NATA and Amruthavarshini organizations performed devotional and light musical songs in praise of Lord Ganesha. Sri Dutt Raga Fine Arts schools run by Aparna Turaga performed a riveting skit titled “Kanipaka Ganesha”.

Sobiya Sudeep and Rugmini Nair performed scintillating classical dances to Ganesha songs. The appreciative audience requested them to perform again. Acceding to the request, they graciously obliged and performed twice in a day.

Spectacular fireworks sponsored by TANA lit up the skies above the Hindu Temple and wowed all the onlookers.

Saraswathi Music Academy with their Guru Swathi Kari led the audience into singing along some uplifting bhajans and classical songs.

Lasya Priya performed an energetic dance on Ganesha with her own modern composition of a traditional song.

Revathy performed a most soulful rendition on Ganesha. Natya Abhinaya under the leadership of Sridevi Dadithota performed dances and also gave audience a few lessons.

Gujarati Samaj members (ladies) did a fascinating garba raas dance.  They attracted a lot of applause.

Ganesh Chaturthi puja was also performed inside the banquet hall on September 20, 2015 by The Chinmaya Atlanta Balavihar. 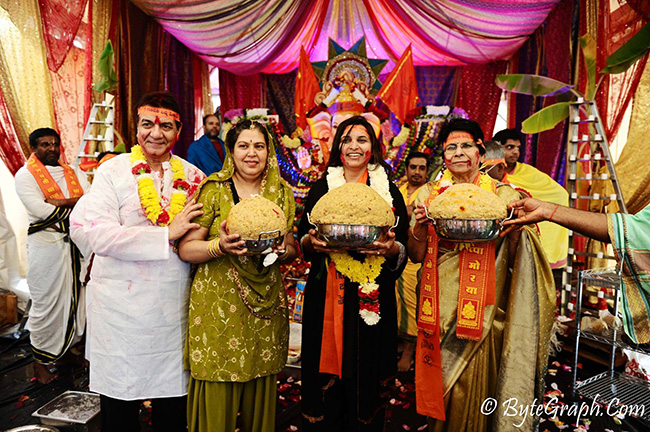 Saturday, September 26 was marked with joyous, enthusiastic entertainment and spiritual fervor. Despite the constant drizzle on Saturday September 26 morning hundreds of devotees, guests and visitors thronged the temple to participate in the culmination of the eleven day celebration with a grand Ganesh Nimajjanam ceremony. The temple chefs Ramakrishna and Srinivasan had prepared three big Ladoos (Ganesh ji’s favorite!) weighing 25, 15 and 10 lbs. respectively. A lively, exuberant auction was conducted by Amitabh Sharma and all the ladoos were sold to the highest bidders and distributed to devotees as prasad. Devotees were provided more entertainment- dhand pradarshan by HSS and SEWA, Holi sponsored by Seema & Anoop Kapoor added to the color of the festivities by smearing the energetic dancers with colored powder. The Softpath Eagles team sponsored white festive kurtas and flags to all the audience, adding to the glory of the event.

Punjabi Society added to the fun by graceful gidda and high octane dhol and bhangra. Kolatam and bathukamma by Gates was followed with exciting matka breaking by kids, and adults. Vish Ganti adorned as Ganesha and delighted both kids and adults.

Maha Mangala Aarathi was performed with deep reverence to the beating of the drums and traditional nadaswaram music every day. 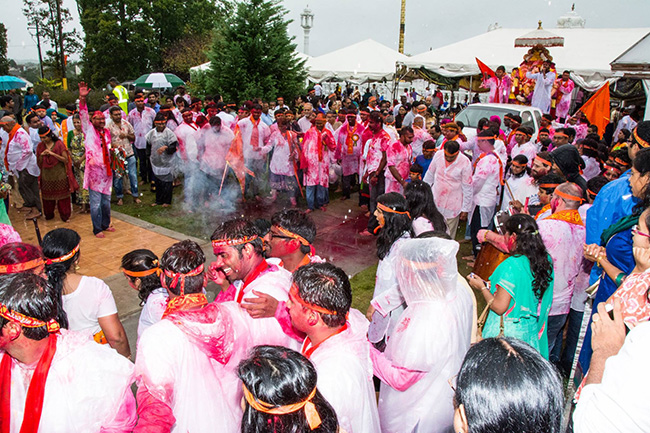 The Hindu Temple of Atlanta provided Maha prasadam to all throughout the day for 11 days. The attendees also relished a varied menu of delectable Indian food prepared under the supervision of food committee chairperson Janaki Harathi and served by the dedicated volunteers under the supervision of Sheela Lingam, Sujatha Reddy and Sairam Surappaneni. This was supplemented by large amounts of delicious food provided by Swapna, Maruthi and Udipi restaurants on September 26, 2015.

It was time to bid final farewell to much-loved Ganeshji and a long motorcade of cars with full police escort left forLake Jackson. At the Lake, Ganeshji was carried on a boat ride to the middle of theLakeand as hundreds of devotees watched from the decks and two other boats nearby, Ganeshji’s nimajjanam ceremony was performed with great fanfare and to the joyous shouts of Ganapati Bappa Moriya and wishes for His early return the following year.

The event was also supported by Shrikanti Vantipalli and Geetha of Plan in Style with their stage decorations, Audio by DJ Durgam, Photography by Bytegraph, Vakiti Creations and Neelamegam Subramaniam. “We would also like to thank Nate Natesan for Swacch Devalaya,” Dr Rao said.

“The executive committee and management of HTA is deeply appreciative of Ravi Chander and Jagan Mohan Rao who were the chief coordinators of the festivities this year. Aravind Goli (Pooja committee chair person) ably coordinated this year’s rituals and deity decorations by the Priests. We are highly indebted to countless volunteers and their families in particular for devoting countless hours in spite of their busy schedules, to make the celebrations a grand success.”

“The celebrations could not have been possible without the office staff and volunteers led by Rajyalakshmi Mohan and Krishna Chaturvedula. We also beg the forgiveness of every one for any lapses and shortcomings and will make every effort to rectify them in the celebrations of next year,” Dr Rao said.