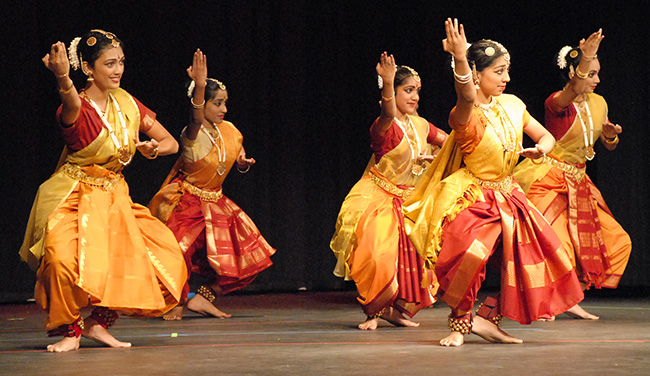 Atlanta, GA: The neelakurinji, a flowering shrub that adorns the shola forests of the Nilgiri range, blossoms only once in twelve years – and then its  bountiful blooms transform the entire mountain range into a magical world of violet and blue!  “Arpan: An Offering”, the aesthetic extravaganza organized by Savitha Vishwanathan and her Nrityasankalpa Dance Academy is a little like the Neelakurinji in this respect; we get the chance to host it very rarely (usually after a lapse of several years) but whenever we are fortunate to do so the venue transforms into a magical world of carefully crafted aesthetic experiences. This year was no different; a fact that was eminently clear when the curtain rose at the Lanier High School Theater on August 15, 2015, where “Arpan” had returned toAtlantaafter a hiatus of four years.

Traditionally, the Bharatanatyam margam (repertoire in a set order) will have only one invocatory piece.  “Arpan” deviated from this tradtion by offering two: a pushpanjali and a thodayamangalam.  The pushpanjali in Gambheeranattai, which was the introductory piece for this evening, was choreographed by Savitha Vishwanathan and performed by her young students who showed excellent footwork and adherence to rhythm.  The thodayamangalam chosen for this event was the composition jaya janaki ramana of Annamacharya in raga-and-talamalika.  This piece was choreographed by Savitha Vishwanathan and exquisitely performed by her students who showed the grace, composure, and understanding needed to negotiate the intricate transitions of this pieces’ talamalika.  These invocatory pieces were followed by the very popular jatiswaram in Saveri composed by the phenomenal Tanjore quartet, and choreographed by Rukmini Devi Arundale.  Savitha’s students executed this piece with superb elegance and seamless blending of the adavus to the intricacies of the musical passages. 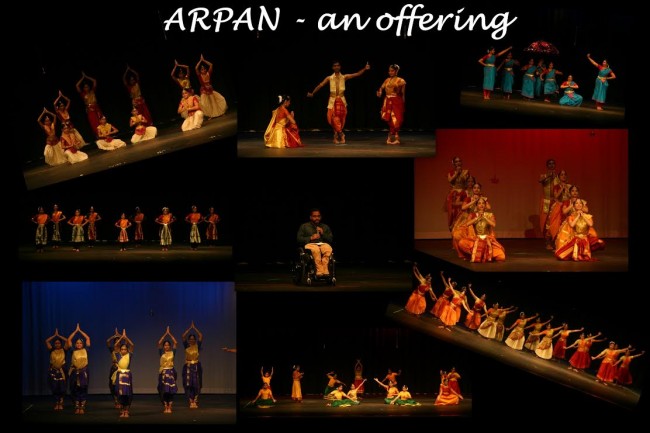 The jatiswaram was  followed by the exquisite padavarnam “swami nee manam irangi”, another jewel from Rukmini Devi Arundale’s choreographic repertory, composed by Papanasam Sivan in Sri Ranjini, set to Adi Talam.  The padavarnam was performed by the senior students of Savitha who enthralled the audience with their remarkably refined interpretation of this piece where the love-lorn heroine’s companion (sakhi) pleads with Muruga to reunite with his Nayika. This piece has some very exquisite pure dance sequences (jathis) with rapidly changing pace and Savitha’s students negotiated these changes effortlessly, with precise, sure footwork and amazing symmetry. After the padavarnam three of Savitha’s senior students presented the keertanam “Nee uraipai Hanumane” composed by Arunachala in ragamalika (in adi talam) as one of the key songs in his Rama Natakam.  Incidentally, this piece was also choreographed by Rukmini Devi.  Although it is ostensibly a set of instructions from Lord Rama to Hanuman, this song deals with a wide range of human situations, like the demands of a teacher, the stubbornness of a loved one, and disregard for safety and its consequences.  Savitha’s students gave a very refined and nuanced performance of this keertanam. The keertanam was followed by Saint Tulsi Das’s bhajan “Shri Ramachandra Kripalu”, set to raga Yaman Kalyan and mishra chapu talam, and performed by the adult students of Nrityasankalpa. They did this with such surprising panache, that the audience could really appreciate the treatment accorded by Leela Samson’s choreography, to this interpretive work of the bhakthi movement.

The diadem of the day’s repertoire was indeed, “Surya”, the interpretation of Subramanya Bharati’s vachana kavithai (poetry in words) “Njaayiru”, choreographed by Sheejith Krishna.

Sheejith brings his magical ability to create fascinating multi-dimensional spaces out of ether through the medium of dance, into giving form to this treatise of Subramanya Bharathi.  Savitha’s senior students gave such a riveting performance of Surya (with total fidelity to the fascinating footwork and movements originally choreographed by Sheejith krishna) that the audience was willy-nilly transported to a cosmic world dominated by the sun.  This was truly a great piece and a great performance.

The day’s incredible terpsichorean feast wound down with the Tillana and the Mangalam, the traditional concluding pieces in the Bharatanatyam margam.  The Tillana chosen for this event was Simhendramadhyamam tillana composed by Bhagavatulu Sitarama Sarma for Rukmini Devi Arundale during his sojourn at Kalakshetra.  This was performed with considerable verve by Savitha’s students, who enlivened the venue by the incredible energy they brought to this performance.  Fittingly, the last piece presented was the Bhoomi mangalam, selected from Pandit Ravishankar’s Chants of India, and choreographed by some of Savitha’s students, who taught it to the younger ones!  This chant of universal goodwill pays homage not to any deity, but to universal elements like the sun, moon, body, and soul. As the younger students of Nrityasankalpa translated this mantra into a mesmerizing dance sculpture, the curtain rang down on an unforgettable evening.

Every endeavor of Nrityasankalpa has the larger good of the community at heart, and this year’s “Arpan” was no exception.  The proceeds of the day were to benefit Prajwala, the anti-trafficking organization inIndiathat is involved in the rescue, rehabilitation, and reintegration of the victims of prostitution, and SBAG (Spina Bifida Association of Georgia) dedicated to educating the public about Spina Bifida, and improving the quality of life of those living with this malady.  Let us hope that Savitha (Nrityasankalpa) gets many more opportunities to serve the community while giving us aesthetic experiences that are immensely enjoyable!