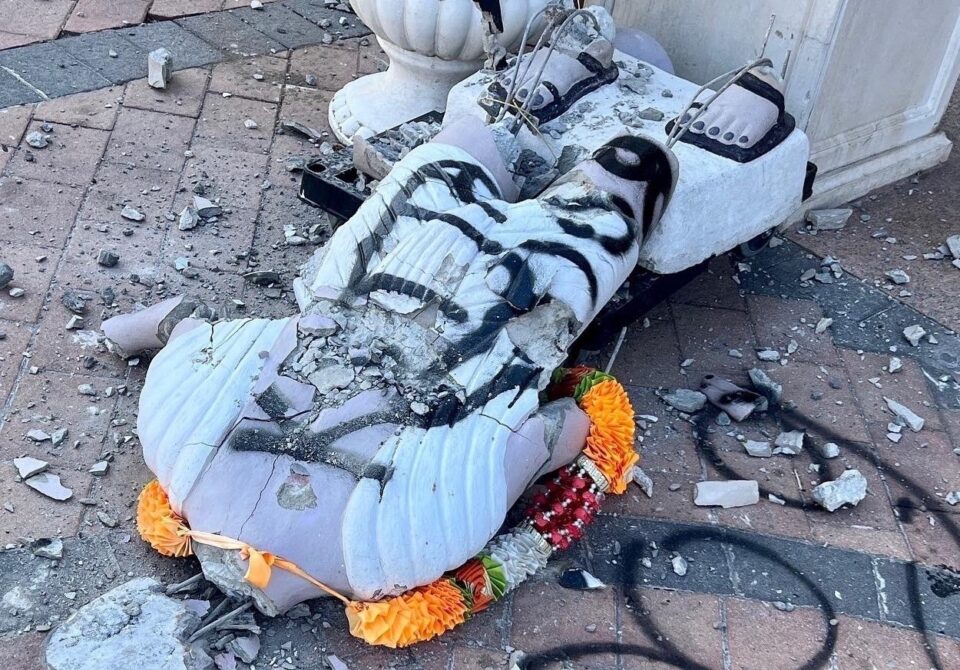 New York, Aug 19 (IANS) A statue of Mahatma Gandhi in front of a temple in New York has been toppled and smashed in the second attack on the memorial this month and a local volunteer watch group has sprung into action to protect it.

The incident in the early hours of Tuesday was the latest in a series of attacks on Gandhi statues in the US .

Six men destroyed the statue at the Sri Tulsi Mandir with a sledgehammer and painted hate-filled words, around it and on the road, according to media reports quoting police.

The statue had been vandalised earlier on August 3 and knocked over, according to the Queens Daily Eagle.

Police released a surveillance video of the men between 25-30 years who are suspected of involvement in the attack.

They fled the scene in a white Mercedes Benz and in a dark-coloured car that may be a Toyota Camry used as a for-hire vehicle, according to police.

Assembly Member Jennifer Rajkumar, the first Hindu elected to the New York State legislature, told CBS New York TV on Thursday: “When the Gandhi statue was vandalised, that really flew in the face of all of our beliefs and it’s very disturbing for the community.”

“To know that Gandhi represents peace and somebody would come and just target the statue and vandalize it, it’s very sad,” temple founder Pandit Maharaj told the New York Post.

Meanwhile, volunteer watch group, the Cityline Ozone Park Civilian Patrol, tweeted on Thursday that its members increased their presence around the temple.

“We increased our presence at Tulsi Mandir and were happy to see (police from) the 106 Precinct there as well. A big thank you to our four volunteers who were out for 7 hours overnight,” it said in a tweet.

After the first attack, Rajkumar had brought together several elected officials, including House of Representatives Foreign Affairs Committee Gregory Meeks, to condemn the attack and demand police action.

“Acts of hate have no place in our community and nation and the perpetrators need to be held accountable,” Meeks was quoted by the Daily Eagle.

The temple is located in South Richmond Park, an area with many people of Indian descent.

During the protests against police excesses in February 2020, a statue in Washington had vile personal attacks on Gandhi and anti-India slogans painted on it.

It was vandalised again in December that year by pro-Khalistani elements during a protest in support of the farmers’ agitation in India.

In another incident, a statue of Gandhi was cut at its leg and toppled over and its head was cut in half in Davis, California, in January last year.

The same statue had also been vandalised with slogans in June 2020.

Speaking to New York Post, Rajkumar noted that “Hindu hate is on the rise”.

A recent report by the Network Contagion Lab at Rutgers University said that it found evidence of a sharp rise in hate speech directed toward the Hindu community and blamed White supremacists for it.

However, the appearance of the suspects in the video released by police does appear to be White.

Moreover, Maharaj told the local news outlet QNS: “The first time it happened the person was speaking Spanish. This time, they were speaking in Hindi.”

Rajkumar told QNS: “I have spoken with government leaders across the country. All are committed to re-doubling our efforts to combat anti-Hindu hate.”

Salman Rushdie off ventilator and talking following stabbing in US