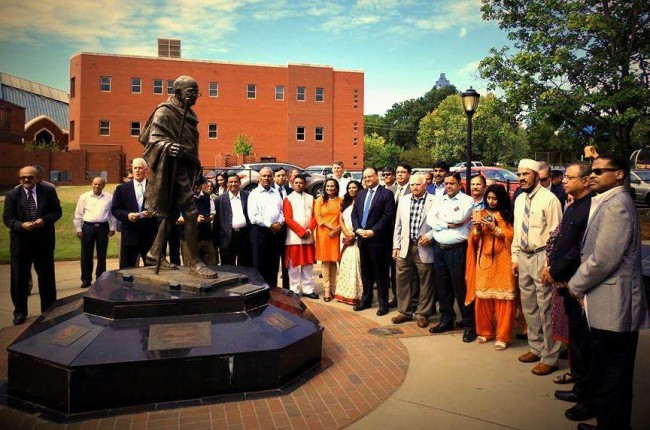 BY JOHN NAUGLE
With inputs by Subash Razdan

Atlanta, GA, October 16, 2017: The Gandhi Foundation of USA (GFUSA) and the Consulate General of India (CGI)-Atlanta jointly hosted a magnificent community celebration for the Mahatma’s 148th birth anniversary, which is also ‘The United Nations International Day of Nonviolence.’ Special observation was also made for the 90th birthday of Dr. Christine King Farris, the big sister to Dr. King.

The event was at the pilgrimage site of the historic Gandhi Statue located on the grounds of the Martin Luther King Jr. National Historic site, which adorns the King Center.

The day was clear, sunny, beautiful, memorable and historic. Antony Thaliath, GFUSA-Executive Director, opened the ceremony by welcoming everyone. The Gandhi statue in Atlanta is proving to be a big magnet as more than a million visitors come to the King Historic site annually to marvel and pay homage to the invaluable bond between MLK Jr. and the Mahatma.

Subash Razdan, GFUSA-Chairman then recognized and thanked all dignitaries, community leaders and supporters for gathering in reverence for the Mahatma. He gave a brief background of GFUSA’s service goals and its partnerships with Embassy of India, the Consulate General of India-Atlanta, the King Center, the US National Park Service and numerous communities and their respective organizations. Razdan also led a solemn moment of silence for the victims & survivors of the USA’s worst mass-shooting and senseless violence which happened in Las Vegas on the evening before, plus in support of all those displaced by recent Category-5 Hurricanes; Harvey, Irma & Maria (respectively delivering great damage to Metro-Houston, Florida & Georgia, West Indies, Cuba, Puerto Rico and other impacted islands).

Mr. Razdan then called Rev Younis Farhat of the First Asian Indian Baptist Church Of Metro Atlanta (FAIBC) to lead the invocation. Following that, the talented Lakshmi Rao & Neera Bahl sang two beautiful prayer songs, leading the chorus with Raghupati Raghav Raja Ram followed by Vaishnava Jana To. Then the traditional floral homage of garlands and bouquets to the Gandhiji Statue were offered by the dignitaries/VIPs.

Esteemed guests of the event included Isaac Newton Farris, the son to Christine King Farris, plus former CEO of the King Center. As Mr. Farris placed flower garlands upon Gandhi’s Sculpture someone proclaimed “look, it’s Gandhi & King standing together.” After garlanding, he then led everyone in the beautiful song “We Shall Overcome” and boldly called everyone to always remember the Mahatma’s example by quoting the powerful words of Dr. King, his uncle:

“Gandhi was inevitable. If humanity is to progress, Gandhi is inescapable. He lived, thought and acted, inspired by the vision of humanity evolving toward a world of peace and harmony. We may ignore Gandhi at our own risk.”

Honorable Nagesh Singh, the Consul General of India in Atlanta, who was joined by Hon Consuls DV Singh and Shailesh Lakhtakia, placed garlands in homage at the life-size bronze statue of Gandhiji. While speaking on the occasion, Mr. Singh also expressed rich tributes to Lal Bahadur Shastri, India’s 2nd Prime Minister, whose birth-date directly coincides with that of Mahatma Gandhi, plus he graciously expounded upon his goals of new support for GFUSA by stating…

“Let’s make the Oct 2nd Gandhi Birth Celebration & UN International Day of Nonviolence a permanent joint-venture event with GFUSA in the CGI-Atlanta Calendar. I will assure you that whoever my successor is, I will leave instructions that this event is a permanent fixture in the Consulate’s calendar, and what we will do is expand this Gandhi Homage and step beyond to talk about the philosophies and ideologies of Gandhiji and Dr. Martin Luther King Jr and how we can implement their strategies in our daily lives and make people’s lives better around us. The second point I want to make is to Subash Razdan and how the India-Atlanta Consulate can help the Gandhi Foundation of USA. I invite you to come and meet with us. I need a formal Proposal on what the GFUSA is doing and what kind of help you would like from us, and we will then take it up with the India Government’s Cultural Relations Department.”

Subash Razdan, GFUSA Chairman, was thrilled to hear this because their plans for the future Gandhi Center-Atlanta continue to develop, plus next year is the exact 20th Anniversary of the dedication of the Gandhi Sculpture (1998-2018). This great gift to Dr. King’s birthplace was accomplished with the concerted effort of many, including the late Giriraj Rao, GFUSA’s co-founder whose 10th memorial anniversary is also next year (2008-2018). In 2007, on the occasion of the 9th anniversary of the dedication of the historic Mahatma Gandhi Statue, Mr. Rao spoke about the commitment of all the GFUSA family in making the installation of the glorious Gandhi Statue a reality at the revered Historic site. At the time, Mr. Rao stated…

“The installation and dedication of the Gandhi Statue in the M.L.K. National Historic Site is significant because it is the first time that the U S Department of the Interior, which administers the National Park Service and historic sites, has permitted such a memorial on Federal lands. The National Federation of Indian American Associations (NFIA) – the largest grassroots national umbrella organization in the USA, with the support of the Embassy of India, the Government of India, Coretta Scott King, Dr. Christine King Farris, Andrew Young, the City of Atlanta, the State of Georgia, the King Center and the Georgia Human Relations Commission, along with a number of Indian-American, Asian-American, African-American and other mainstream community organizations all came together in harmony for this to fructify. The project received support by commercial and private Sponsors including the principal sponsors The Coca-Cola Company and Home Depot.”

Greg Pridgeon, Vice Chair GFUSA-and former Chief of Staff to Atlanta Mayor Shirley Franklin, reiterated that Dr. King’s philosophy was significantly influenced by the great Mahatma, and both have helped in bringing different races together worldwide. They are revered today for their legacies, causes and convictions.

John Naugle of GFUSA, plus founder for Atlanta: City of Peace — an organization inspired into existence from the great example of GFUSA — looks forward to the future Gandhi Center in Atlanta. He stated: “If it can be developed near the King Center & Carter Center then this area could be termed the Global Peace Triangle District.” Naugle read this meaningful statement about Gandhi that was written in 1939 by Albert Einstein on the occasion of Gandhi’s 70th Birthday. Note: Einstein later became TIME Magazine’s “Man of the 20th Century” and he proclaimed this about Gandhi…

“Generations to come… will scarce believe that such a one as this,ever in flesh and blood walked upon this Earth.”

Subash Razdan envisions significant restoration and growth for the Gandhi Foundation of USA and his Team is busy planning for Oct. 2, 2019 national event in Atlanta — which is the Sesquicentennial (the 150th) Birth Anniversary for Gandhi. GFUSA welcomes participation from everyone, especially Hon. Nagesh Singh, Consul General of India-Atlanta, plus philanthropists, civic, government and business leaders from around the USA & world. Mr. Razdan states, “With GFUSA’s supporters, we can soon have a brighter future for our organization and the envisioned Gandhi Center-Atlanta as we all join efforts to better celebrate the great legacies of Gandhiji and Dr. King.”

Many GFUSA supporters including media and community organizations, especially Sewa International and Indian Friends of Atlanta (IFA) were mentioned in admiration for their community and relief service during the recent Hurricane disaster.

The Gandhi Jayanti Celebration finished with several beautiful Birthday Cakes for Gandhi and other dignitaries also observing Birth Anniversaries; Dr. Christine King Farris and community members Sunil Savili of Indian Friends of Atlanta, and Rita Lodh Roy Dannenberg. Delicious refreshments were graciously catered; courtesy Manoj Bhatia. At the close, some attendees “Walked in Peace” (a tradition of GFUSA) to the King (Dr. M.L. King Jr and Mrs. Coretta Scott King) crypts, where bouquets were placed as homage to Dr. King and his wife Coretta Scott King, champions of Civil & Voting Rights. After that some of the attendees also took the optional tour of the Gandhi Room (Museum) on the second floor of the Freedom Hall, KING Center. A memorable day indeed reminding humanity that both Gandhi and King continue to remain relevant!