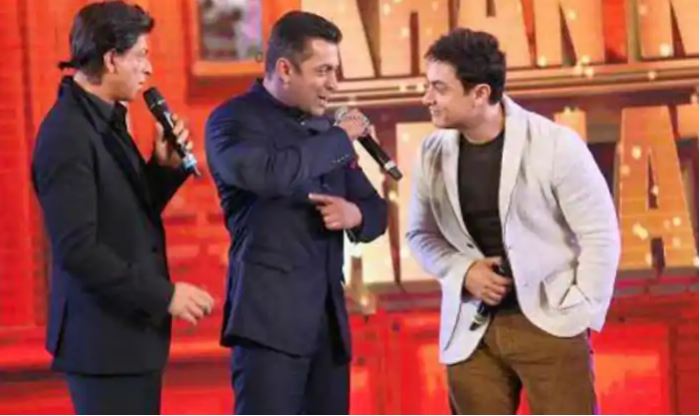 (Our series on contemporary Bollywood heroes will focus on the industry’s top male mainstream stars. We kick off with the Khans, who have been defining everything Bollywood for over two decades now.)

The Khan triumvirate has pretty much dictated all things Bollywood for over two decades now. Between them, Salman, Aamir and Shah Rukh Khan scaled unprecedented popularity, frequently rewriting the box-office record books with their blockbusters.

More importantly, the Khans redefined the concept of success in Bollywood. With smart PR and marketing, entrepreneurship skills, and intelligent use of the media as well as social media, the trio set an important ground rule for new-age Bollywood: Scoring box-office hits was no longer enough, with the Khan trio arrived the era of brand power. To be truly successful in Hindi cinema’s new age, one needs to be a unique brand.

So, SRK who managed to stay at the top through the nineties and the 2000s, did so cashing in on NRI dreams of the average Indian, positioning himself as the chocolate-box loverboy. By 2010, the nation’s socio-politics was gradually changing, and Hindi cinema was looking inwards for inspiration. As smalltown India and the smalltown Indian became a rage, the magic of SRK’s sophisticated romantic icon had started to wane. Salman Khan’s Dabangg stereotype would take over, over the next decade. Brand Aamir Khan, on the other hand, created a very different niche. Refusing to stick to a particular image on screen unlike Salman or SRK, Aamir devised for himself the image of an actor who had perfected the trick of scoring record-busting blockbusters with content-driven fare such as “3Diots”, PK” and “Dangal”.

All this worked while it did. The trouble is, in showbiz, every image and strategy is only as good as it ensures returns. At a time when content has increasingly started dictating box-office tastes, image-driven cinema is increasingly losing importance. The Khans realise as much – Shah Rukh and Salman, especially, have lately tried every trick to rid themselves of the stereotypes that rule their image.

The trouble is both Salman and Shah Rukh have struggled to score blockbusters lately, irrespective of whether they adhere to tested image or move away from it.

SALMAN: BANKING ON SEQUEL FORMULA
So, Salman, while trying to move away from his alpha male image, released “Tubelight” on Eid 2017, which cast him as an imperfect, vulnerable protagonist. The film struggled after its opening weekend and barely managed a lifetime’s domestic collection of around Rs 121.25 crore, which classifies it as an average grosser.

Salman’s return to familiar image and spectacular action a few months later the same year with “Tiger Zinda Hai” worked, but the superstar struggled trying out the same formula in his Eid 2018 action thriller, “Race 3”. The film managed only Rs 169 crore in the domestic market, and was classified and average grosser.

This year on Eid, Salman was in no mood to take chances. “Bharat”, his Eid 2019 release, was formulaic social drama with scope of action, thrills, good music and romance, and the film cast him opposite his normally lucky mascot Katrina Kaif. Eid, however, was far from a blockbuster event. “Bharat” fared only marginally better than Salman’s releases of past two Eids, scoring Rs 209.36 crore and being declared a Plus Earner.

Given the situation, Salman is now trying to stick to what worked once. He is banking on sequels, with ‘Dabangg 3″ and Kick 2″ lined up. “Inshallah”, the romantic musical with Sanjay Leela Bhansali he had lined up for Eid 2020, has been pushed for now. Instead, he sent out a cryptic tweet on Monday afternoon underlining his plans to release “Kick 2” on that day. Clearly, the actor hopes the new “Kick” sequel will repeat the success of the first “Kick” film, which scored blockbuster rereturns on Eid 2014.

Considering Salman Khan has traditionally thrived being himself on the screen, the sequel formula would perhaps seem the safest route for him. “Tiger Zinda Hai”, after all, has been his biggest hit in recent years. It is a formula that will let him survive as a big star, but will it let him survive changing trends and younger competition? Time will tell.

SRK: HUNTING FOR A PLOT
For Salman’s immediate rival Shah Rukh Khan, things have only been uphill over the past few years. SRK’s last superhit was ‘Happy New Year” on Diwali 2014. If Salman appropriated Eid, SRK has had a long history with big wins on Diwali every year. “Baazigar”, “Dilwale Dulhania Le Jayenge”, “Dil Toh Pagal Hai”, Kuch Kuch Hota Hai”, “Mohabbatein” and “Veer-Zaara” have been among his biggest Diwali blockbusters.

When “Ra.One” did disappointing business on Diwali 2011, SRK was perhaps at a loss. This was film where he had drastically moved away from his loverboy image. An outlandish sci-fi plot for Bollywood fans was perhaps the reason, but the below-expectation show of Ra.One served a warning to SRK: His position as King Khan was no longer to be taken for granted.

The nine years since have only seen Shah Rukh slip. Except for his Republic Day 2017 release, “Raees”, which did Plus business, no other SRK film after “Happy New Year” has scored at the box-office.

In recent times, Shah Rukh’s plight, in every way, has been the same as Salman’s. He has mostly failed to leave an impact when he tried moving out of his comfort zone of playing the romantic hero in films such as “Don 2”, “Fan”, “Dilwale” and “Zero”. He has also not impressed lately when he tried to reinvent the romantic hero to suit his advancing age, in “Jab Tak Hai Jaan” and “Jab Harry Met Sejal”.

Shah Rukh Khan’s problem, probably, is the fact that his mighty brand power by far outstrips his position as an undeniably gifted actor. With the brand power eroding with age, and with SRK not quite successful in reinventing his mojo, the outcome is a very exhausted superstar.

SRK knows, which is why he has stopped signing films for now. Till he gets his plot right.

AAMIR: WILL HE BE LAST KHAN STANDING?
Far from being a serious contender for the numero uno spot over Shah Rukh or Salman, Aamir Khan has actually been the most consistent in starring in Bollywood’s biggest blockbuster of all time over the past decade. First, it was “3 Idiots” (in 2009, which scaled that high. The record of “3 Idiots” was broken by his own “PK” (Rs 339.5 crore) in 2014. Two years later, “Dangal” busted the record “PK”. “Dangal” (Rs 387.39 crore) continues to be Bollywood’s biggest hit as of date. Interestingly, all of Aamir’s biggest hits – also includes ‘Dhoom 3″ has released in Christmas.

The actor’s success mantra is what has probably laid down the formula for modernday Bollywood’s slant at content-driven entertainers. Among the Khans and also including most superstars before their era, Aamir was the one superstar who understood the importance of amalgamating solid script with commercial entertainment value. For this, he needed to avoid falling into an image trap – which let him play an oversized wrestler in “Dangal” with as much ease as he essayed a misfit alien in “PK”.

Aamir’s problem now probably is that younger actors as Ayushmann Khurrana, Vicky Kaushal and Rajkummar Rao have picked up the trick. Although they are far from guaranteeing the sort of returns an Aamir Khan film normally gives, Aamir knows the film industry can be a fickle place, and fans can be unpredictable. The failure of his absolutely disappointing “Thugs Of Hindostan” last Diwali underlines the fact.

The disaster that “Thugs Of Hindostan” was probably shouldn’t be held against Aamir alone. The film was a bad product, it would have crashed anyway. The actor’s detractors, however, have been quick to point out his 2013 release, “Dhoom 3”, would fall in the same category of brainlessness, and yet went onto become a superhit. If “Dhoom 3” worked then, and “Thugs Of Hindiostan” failed last year, his detractors hold it as a sign that Aamir Khan is slowing down.

Aamir, it would seem, is best suited to survive age – not just for creative instincts, but for his commercial sense. He has selected the right script to return over two years after “Thugs Of Hindostan”, when his next release, “Lal Singh Chadha” opens on Christmas 2020. The film is a Bollywood remake of “Forrest Gump” and directed by Advait Chauhan, who directed Aamir’s superhit production “Secret Superstar” earlier. As a product in the making, “Lal Singh Chadha” seems like just the right one fans of mild, middle-of-the-road entertainers as “3 Idiots”, “PK” and “Dangal” are awaiting after all this time.

Aamir’s challenge right now is to live up to his image as an actor who ensures quality Bollywood fare every time without losing out on commercial value. With every film, living up to that challenge could obviously get tougher. But while Salman and Shah Rukh look increasingly headed towards a zone of unpredictability as younger actors close in, Aamir is mostly likely to adapt and survive. He is a bit like Amitabh Bachchan that way.
(figures courtesy koimoi.com)

COMING UP IN THE SERIES: Akshay Kumar and Ajay Devgn: The big survivors

After DiCaprio, US actor of Indian origin eyes Aamir's films