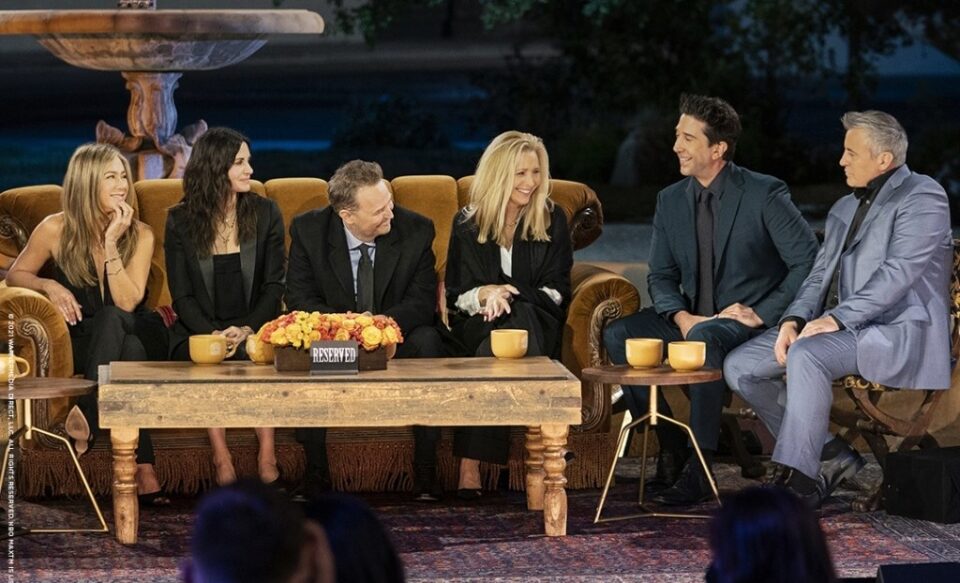 Back in the day, this would have been a nice touch as Bonus Feature on a Collector’s Edition DVD set. In the streaming era, when right marketing can trend just about anything that can be dropped on OTT, the pop hysteria about “Friends” renders reason enough for an event release. The hype about the special seemed obvious pre-release.

“Friends: The Reunion” was never really meant to reload the hysteria. The purpose was always to remind the world that the hysteria still exists. Seventeen years after the original series ended its decade’s run, the reunion special was essentially aimed at reiterating the fact that nostalgia around the series is still intact.

Creators Kevin S. Bright, David Crane and Marta Kauffman have wisely gone for an unscripted format, aware perhaps that no amount of smart storywriting could create an episode that would let them avoid comparisons with an original series that continues to draw overwhelming sentimental appeal. Bright, Crane and Kauffman let the cast be themselves, and also bring into the show the essence of the characters they played.

One by one, they walk into Stage 24 on the Warner Bros. lot in Burbank, California, and we get a close look at the sets that so seamlessly passed off as Monica’s living room, Chandler and Joey’s bachelor pad, the hallway between the flats, the fountain around which they groove to the title song and, of course, Central Perk.

“This is beautiful,” sighs David Schwimmer, aka Ross Geller, the first to arrive, as he soaks in yesterday once more. You are drawn in instantly, for a 104-minute ride into a happy fictional past.

They open up their boxful of memories, seated on the orange sofa and next to the fountain of the theme song that are set on a stage. They relive the years that were, on and off camera, recreating highlight scenes and sharing behind-the-scene trivia. Director Ben Winston mixes highlight moments from the series as the sextet talks about those scenes or episodes.

It is a swell idea actually, more so if you are a fan. It would have made for a perfect watch, but for a couple of glitches.

First, they should have let the six friends be. Instead, they put James Corden into the mix.

“The Late Late Show” host is a master of chatting up celebs but, trying to fit himself on stage with the six and their sofa, he seems grossly out of place. He is there to monitor the conversation, we understand, to ask key questions at the key moments to keep the impromptu vibes coming in. Somehow, the outcome ends up more staged (no pun intended) than it actually is.

The second thing lacking is audience connect. Watching “Friends” over 10 years — as well as in numerous reruns — one always became a part of the gang, in the same room. There was the note of camaraderie the six friends managed to strike that made each of their millions of fans feel like they were the seventh friend in room.

The reunion special is too detached, mainly because of the way it is structured. A major chunk of the runtime sees the friends on the sofa on a stage while the live audience watches from a distance. It doesn’t help that very few of the show’s other popular actors get an entry — notably, Maggie Wheeler (Janice), Tom Selleck (Richard), and James Michael Tyler (Gunther). But these are fleeting appearances.

There are the much-publicized celebrity appearances, too. Without giving away spoilers, Justin Bieber, Lady Gaga, Cindy Crawford, Cara Delevingne essay fun cameos. You have BTS, Reese Witherspoon, Kit Harrington and David Beckham opening up with recorded messages. Lots of memories are swapped, some revelations made, and a bit of gossip is confirmed (Jennifer Aniston and David Schwimmer did have a crush on each other in the early phase!).

It’s down to the little moments and the random quips really, more than overall planned production, to make the special click. A downside is also the fact that the reunion doesn’t leave you with a remarkable last shot. The least they could have done was throw in a funny one mid or post-end-credits.

“Friends: The Reunion” is the one that flew down memory lane and little else. For legions of fans that is the one thing they’ve lived for through the last 17 years.