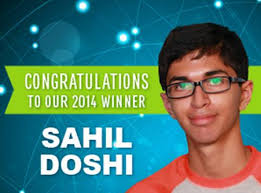 A ninth grader from Pittsburgh, Pennsylvania, Doshi was awarded the title of “America’s Top Young Scientist”, $25,000 and a student adventure trip to a destination such as Costa Rica, according to a media release.

His prototype — the PolluCell — converts carbon dioxide into electricity, ingeniously helping to reduce the Earth’s carbon footprint while offering power for household uses and developing nations.

Over the past three months, Doshi and nine other finalists had the exclusive opportunity to work directly with a 3M scientist as they created their personal innovations as part of a summer mentorship programme.

During a live competition at the 3M Innovation Centre in St. Paul, Minnesotta, last week the finalists shared their completed innovations with a panel of distinguished judges.

“The Young Scientist Challenge at its core celebrates the wonder of science and students who embrace innovation and creativity,” said Bill Goodwyn, president and CEO of Discovery Education.

“We are honoured to stand alongside 3M in congratulating Sahil and the rest of this year’s finalists for their dedication and innovative thinking,” he said.

He received a $1,000 prize and a student adventure trip to a destination such as Costa Rica.

The fifth-placed Mythri Ambatipudi, a ninth grader from San Jose, California received a $1,000 prize and a $500 gift card from Discovery Experiences.