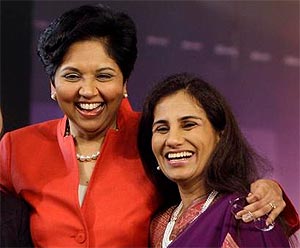 Kochhar, managing director and CEO of India’s largest private sector bank, has moved up one position from her fifth position on the 2012 list, while NSE’s Ramkrishna has made it to the list for the first time.

On Chitra Ramkrishna, who figures among 12 women newcomers “changing the face of global power”, Fortune said she made history as the first woman to head an exchange in India.

“The National Stock Exchange lifer, who was part of the core five-member team selected by the government to create a screen-based exchange in 1993, has shattered the glass ceiling, making history as the first woman to head an exchange in India,” Fortune said.

The board is banking on her 20 years of experience to oversee India’s largest exchange – seventh largest in the world – with a total listed market capitalisation of some $1 trillion, it added.

About Nooyi, who retains her second position on the US list, the magazine said “the largest food and beverage company in the US saw shares hit an all-time high earlier this year”.

The US list continues to be topped by technology giant IBM’s Ginni Rometty. DuPont’s Ellen Kullman is ranked third, followed by Lockheed Martin’s Marillyn Hewson and Facebook’s Sheryl Sandberg at the fourth and fifth positions, respectively.