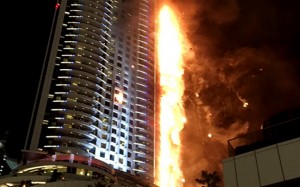 Dubai, Jan 1 (IANS) Fire broke out on Thursday in a luxurious hotel in Dubai where people were gathering nearby to watch the New Year’s fireworks show.

The fire broke out around 9.30 p.m. at the Address Downtown Dubai hotel, close to the world’s tallest building, the iconic Burj Khalifa, and near to the site of a planned fireworks show.

According to local media, the fire started at the 20th floor from the exterior of the hotel, and the fire control systems were perating to prevent the fire from reaching the interior of the building.

About four fire-fighting teams were working to stop the fire from spreading and ensure public safety.

No casualties were reported, according to Dubai General Department of Traffic.

The hotel seems well booked, with many guests seen on their balconies as fire bridges were rushing in and the fire was spreading to the high floors.