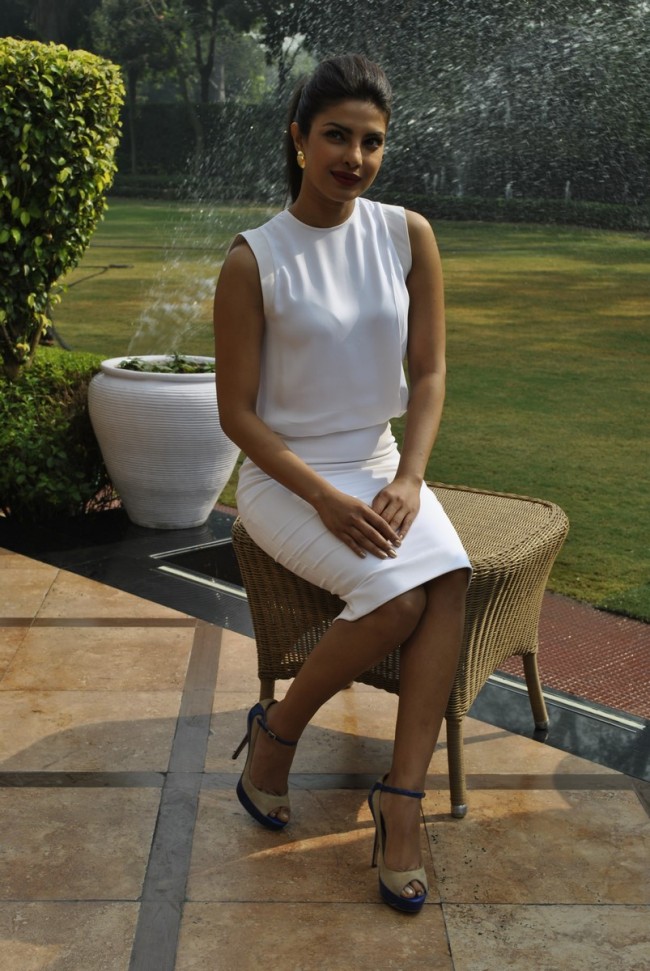 New Delhi, Dec 5 (IANS) At the peak of her career, Bollywood’s marquee actress Priyanka Chopra changed track to explore the world of music – only to emerge as a winner. And now she has ventured into film production. Describing her activities as “unique”, she said she doesn’t follow a path but creates her own.

“I am not an ordinary star. Everything I do is sort of unique and I hate being clubbed as ‘oh celebrities’,” Priyanka told IANS in an interview.

“I have a very unique personality. I like to do things which I want to do and I don’t know whether these things will turn out to be good or bad. But everything that I have done has been very unique to me. I don’t follow a path, I create my own,” Priyanka added, looking chic in a white dress.

Her showbiz journey started with being crowned Miss India and going on to win the Miss World title at the age of 17, followed by her Bollywood debut in 2003 with “The Hero: Love Story of a Spy”. After that, there was no looking back as she mastered the art of delivering the unexpected.

However, planning for the future is not Priyanka’s style.

“I never knew I will become an actor or a singer or a producer. Things just happened as I evolved. So, I can’t say when I will do what,” said the 32-year-old.

For Priyanka, 2014 was good largely due to the success of her sport-based film “Mary Kom”.

“It’s been a great year. I started off with ‘Gunday’ and then ‘Mary Kom’. The business that ‘Mary Kom’, a female-led film, did is huge. For me, the biggest victory with ‘Mary Kom’ was it’s numbers on the opening weekend.

“Female films start with small numbers and make Rs.50 or Rs.60 crore in two months, but that was not the case for ‘Mary Kom’. It’s a huge step,” the actress said.

The actress is now prepping up for her Zoya Akhtar’s “Dil Dhadakne Do” and “Bajirao Mastani”.

Priyanka, who was recently in the capital to support the Girl Rising campaign, says women empowerment is seeping into the film industry, but slowly.

“We live in an extremely male-dominated world and slowly it’s changing. For instance, actresses used to get roles with three songs and 12 scenes. I personally have tried to move away from such films, but every girl doesn’t get such an opportunity.

“Female actors are even afraid to do that because it is easier to do a film with a boy and share the credit,” she said.

The success of women-centric films like “Mardaani”, “Queen” and “Mary Kom” proves that a wave of change has set its foot in Bollywood.

“It is so great to see actresses now coming and taking those steps and saying, ‘Okay the film will be on my shoulders’ . When I did ‘Fashion’ everybody thought I was mad, but it proved a point that female-led films, if are good films, will be seen.

“We might not make Rs.200 or 300 crore but it is a beginning. It will take some time but we will get there,” the actress said.

Priyanka doesn’t just exude optimism but is working towards it. She says along with the Clean India campaign, she is working on her own ‘abhiyan’ (campaign).

“I hope to do more such (women-centric) films so that the generation after me is not afraid to take films which are on their shoulders and girls get parts that make them as relevant as boys. So it’s my own ‘abhiyan’,” the actress said.