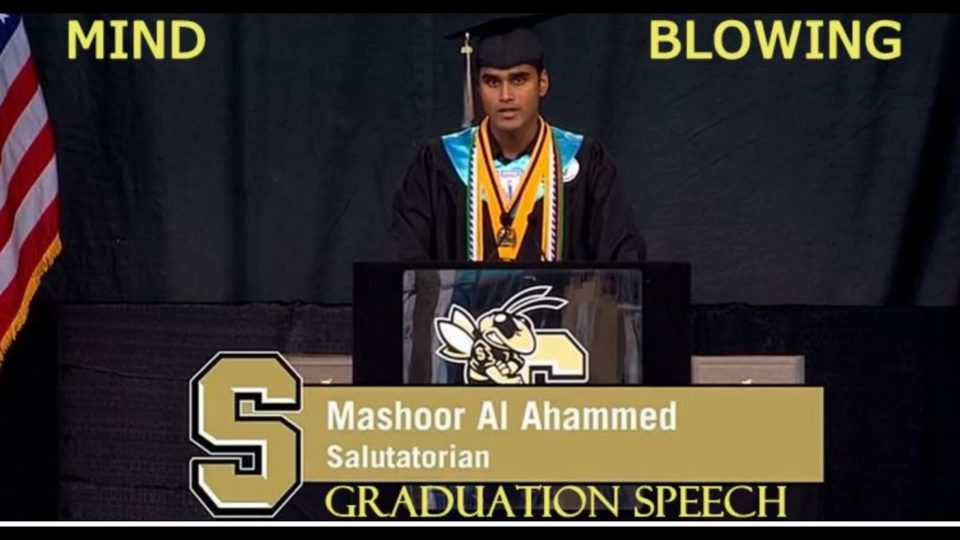 Atlanta, GA, July 24, 2020: Sprayberry High School Salutatorian Mashoor Al Ahammed delivered a powerful speech at his high school graduation ceremony, using his voice to speak about the current Black Lives Matter protests across the country and encourage his classmates to take this opportunity to “take action” for the movement.

Mashoor was one of nearly 180 seniors from Sprayberry high school who graduated Wednesday night on the field at McEachern High School in a ceremony that was quite different than years past due to the pandemic.

All the high schools in Cobb country held their graduation ceremony at the Walter H. Cantrell Stadium in McEachern High School this past week. Graduates were only allowed to bring four immediate family members to the ceremony and were required to sit together in socially distanced rows. Face masks were mandatory and to gain entry you had to sign a waiver attesting that you were not feeling sick and that you have not been exposed to someone with confirmed or suspected COVID-19, the illness caused by the coronavirus.

Mashoor talked about the obstacles the class of 2020 had faced, including the schools shutting down for the last few months of their senior year, and how they had fought through this hindrance “to come out on the other side as stronger and more mature members of society.”

Mashoor also talked about the underlying problems in society that were exposed during this pandemic. “During a time when we all have to come together as a nation, as human beings, even such a small thing as wearing a mask in made political.”

“60 years ago, Martin Luther king Jr lead a movement, a movement that lead to the creation of the Civil Rights Act of 1964, so that we could be standing here together. So that me, a Muslim Indian Immigrant can be delivering this speech to you, on this platform, today. But the fight is not done yet.” Continued Mashoor

Mashoor strongly addresses that the underlying problem of racism is still burning within the country. It has been almost 60 years since Martin Luther King Jr. had led the movement that led to the creation of the Civil rights act of 1964, and that was supposed to create equality within the nation.

Mashoor ended his speech by stating, “Now at the end of our career as students, we have an opportunity; now is our time to take on the world, and to pursue our passions to leave a legacy. I am confident that this graduating class of Sprayberry will utilize the important lessons we have learned in the past few months to not only to achieve greatness, but to do the right thing.”

At Sprayberry, Mashoor was the president of National Honor Society, and the secretary of the Cobb County 4-H club. He also involved with the Student Government Association, BETA Club, HOSA (Health Occupation Students of America), and Chick-Fila Leader Academy, and conducted a research internship at Father Muller’s Medical College Hospital in India. He graduated Sprayberry as an AP Scholar with Distinction, and was also awarded the Senior Elite, the highest honor at Sprayberry High School. He now attends Georgia Institute of Technology where he majors in Neuroscience with a minor in Health and Medical Sciences.

Originally from Kasaragod in Kerala, Mashoor’s family moved to the US in 2015.