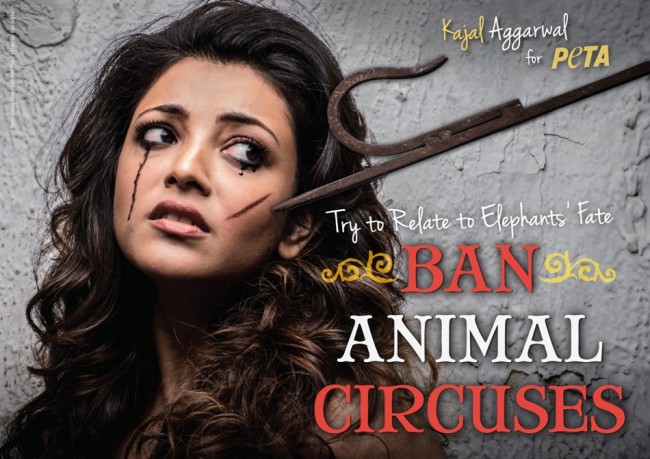 Chennai, Dec 24 (IANS) Southern actress Kajal Aggarwal, who is currently busy shooting for Tamil film “Maari”, believes that one need not be an “obsessive animal lover” to support People for the Ethical Treatment of Animals (PETA).

Kajal has collaborated with the animal rights organisation in their latest ad campaign against cruelty against animals in circus events.

“We’ve all grown up watching circus. I always used to wonder how these animals jump through rings of fire or do so many such unbelievable feats. But since my association with PETA, I’ve understood the conditions in which these animals are trained and kept,” Kajal told IANS.

“I’m happy to bring some awareness about this issue. I’m not doing this because I’m some obsessive animal lover. My association doesn’t stem from crazy love for animals but from a humanity point of view. As humans, I think all of us should be concerned about such issues,” she said.

Kajal added that she didn’t jump at the opportunity to extend her support for the campaign. She confirmed her participation after verifying facts herself.

“They told me about the research they had conducted along with their sister-concern Animal Rahat. They also showed me pictures and videos of how animals are treated in the circuses. It was only after I was one hundred percent convinced did I confirm my association,” she said.

Kajal chose to be associated with PETA because of its “international acclaim”.

Asked how she is going to take out time for such initiatives amid her tight schedule, she said: “I’ve always wanted to give back to the society. I’m doing this because I believe in it. Hence, I don’t think taking out at least a day in a month would be a problem.”

In the latest advertisement, Kajal peers into the camera with an ankus or elephant hook in the foreground and a fresh cut on her face next to the caption “Try to Relate to Elephants’ Fate – Ban Animal Circuses”.