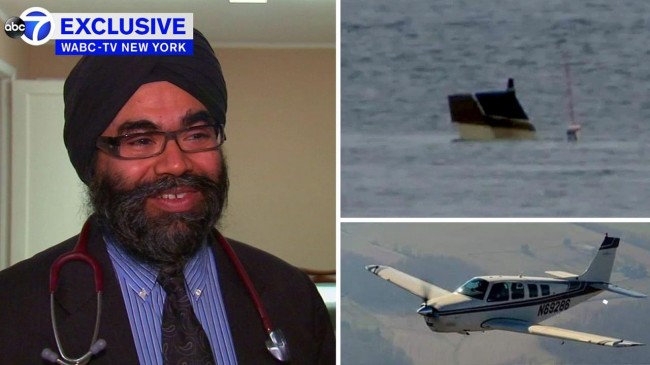 New York City, Dec 13 (IANS) An Indian-origin doctor miraculously survived a plane crash on Sunday when the plane he was piloting developed an engine trouble and came down in the frigid waters of Long Island Sound, an estuary off the city.

Inderpal Chhabra and his co-pilot David Tobachnik climbed out of the sinking plane and hung on to a rock till they were rescued, News 12 cable station reported.

Chhabra, a 1992 graduate of Maulana Azad Medical College in Delhi, described the event as a “controlled landing” and not a crash as he was in control of his single-engine Beechcraft Bonanza, till it hit the water.

“It was a controlled landing on the water, it was not a crash,” Chhabra told WABC TV. “Up until the last minute that I hit the water, I was actually still flying the plane.”

Chhabra said that he and the co-pilot waited on the plane’s wing till it sank and then swam the short distance to a large rock from where they were rescued.

News 12 said that he had taken off from MacArthur Airport in Ronkonkoma on Long Island, about 100 kilometres from New York City, and was headed to Calverton.

“As soon as I reached cruising altitude it got a little bit of a shudder, so I looked at my co-pilot and was like, ‘Should we turn back?'” Chhabra told WABC. “And he said, ‘Yeah you should.'”

He said he was prepared for dealing with the emergency. “This is what we train for,” he said. “Fly the plane all the way into the crash, and I’m so glad that’s what I did.”

The wait for the rescue seemed like an eternity to him.

“I was like, why is this taking them so long? We could see the police helicopters directly over us, so we knew that help was near, but it seemed like an eternity,” he said.