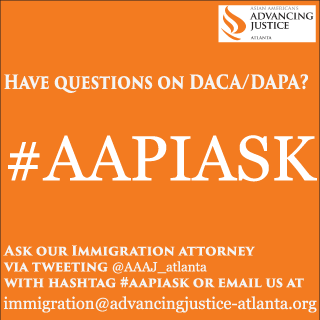 Atlanta, GA: Asian Americans Advancing Justice – Atlanta is disappointed by the decision and temporary injunction issued by the a federal district court yesterday in the Texas v. U.S. case, which puts a temporary block on the implementation of President Obama’s 2014 Executive Order which expands the Deferred Action for Childhood Arrivals (DACA) program and creates a Deferred Action for Parental Accountability (DAPA) program, said a press statement.  The case and the decision will now be appealed in the Circuit Court.
“To block administrative relief just two days before the expanded DACA application was going to be made available is hugely disappointing, but this first court decision should not scare people away,” said Helen Ho Advancing Justice – Atlanta’s Executive Director.  “We are hopeful that this temporary injunction will be overturned, and in the meantime encourage people to start collecting their documents in anticipation of expanded DACA and DAPA applications being made available in the near future.”
This temporary court injunction will not impact recipients of the 2012 DACA program.  In November 2014 President Obama in response to the inability of Congress to pass federal immigration law reform, issued an Executive Order to expand DACA and create a new administrative relief program for certain undocumented parents.  The expanded DACA application was scheduled to be available on February 18th on the USCIS website; the DAPA application is scheduled to be available in mid May 2015.  In light of the injunction the Department of Homeland Security issued a statement that the expanded DACA applications will not be available tomorrow, February 18th, as originally planned.

“While the temporary injunction is being appealed, Advancing Justice -Atlanta will continue to be a trusted legal resource for our immigrant and refugee family members and friends who have questions about either of these programs,” said Monica Kinene Advancing Justice – Atlanta’s Legal Director.

Individuals with questions about DACA, Expanded DACA, and DAPA can contact Advancing Justice Atlanta attorneys through the following:

Patel Brothers to close all locations from March 30; hopes to reopen in 10 days