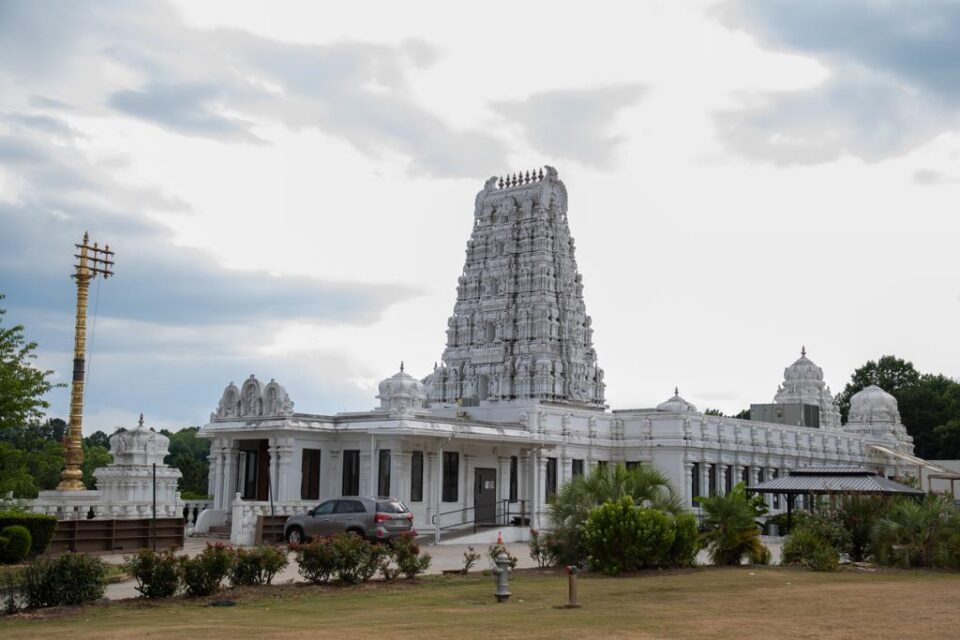 Atlanta, GA, July 4, 2022: The Tirumala Tirupati Devasthanam (TTD) in association with Hindu temple of Atlanta, Riverdale is set to hold Srinivasa Kalyanam, the celestial wedding of Lord Venkateswara with his consorts Sridevi and Bhudevi, at Hindu Temple of Atlanta, Riverdale on Saturday, July 9, 2022. The Archakas who perform pujas at Tirumala Temple are the officiating priests for Srivari Kalyanam in collaboration with HTA priests accompanied by live Nadaswaram.

All devotees are encouraged to attend the celestial wedding and take the blessings of the divine couple. It is a divine opportunity to be part of this very rare celestial Kalyana Utsavam and get the blessings of Sri Devi Bhudevi Sameta Venkateswara swamy, the bestower of all boons.

The above sloka aptly conveys the very purpose behind the KalyAna Mahotsavam of the Lord. The sole purpose of Kalyana utsavam is the protection and prosperity of the world.

The Kalyana Utsavam of Lord Venkateswara who is Pratyaksha Dhaivam in Kaliyuga has the power of leading mankind to the right path and ultimately to salvation. “Srivari Kalyana Utsavam” is the celestial wedding generally performed to the utsava murtis – Sri Venkateswara Swami and his consorts Sridevi and Bhudevi.

Preparations are in full swing at HTA to perform Srivari Kalyanam for the benefit of Atlanta devotees. ‘Srinivasa Kalyanam’ will be celebrated on the lines of the Kalyanotsavam performed at Tirumala. It is a rare occasion for the devotees to witness the celestial wedding of the Lord and His consorts Bhudevi and Sridevi.

The divine wedding of Lord Balaji and his consorts Sridevi and Bhudevi is one of the most famous rituals at the Tirupati Temple. At the request of Indians in America, TTD hosted several Srivari Kalyanams since June18, 2022 and successfully performed with devotional fervor in different cities across America for NRIs who are unable to travel to Tirupati. The TTD temple priests brought vigrahas of Lord Balaji, Goddess Sridevi and Bhudevi and other material for the celestial wedding ritual, Srivari Kalyanam utsavam. Srivari kalyanams were already held in San Francisco, Seattle, Dallas, St Louis, Chicago, New Orleans, Washington DC. TTD’s Celestial wedding ceremonies of Lord Balaji in America will be concluded with Srivari Kalyanam in Atlanta on July 09.

The Almighty God Sri Venkateswara/Balaji needs no introduction. Tirumala Tirupati/Tirumala Tirupati Devasthanam is well known worldwide. Lord Venkateswara, also known as Lord Balaji and Lord Srinivasa, is a powerful Hindu God who would respond every time. His devotees call Him to rescue them whenever they are in a crisis and wherever there is a problem in their life.

The deity/Vigraha in Tirumala Tirupati is Vishnu himself as Srinivasa who will save mankind from the trials of Kali Yuga, hence the name Kaliyuga Pratyaksha Daivam and Tirupati Kaliyuga Vaikuntam. Lord of Tirumala is being worshipped across the globe by millions of devotees as the most benevolent boon-giving deity of KALIYUGA and this makes Him as the most sought-after deity in the entire world. Lakhs of devotees visiting this Shrine everyday throughout the Year. With different reasons and seeking different things.

The Tirumala Tirupati and Sri Venkateswara Deity, Vigraha in Sanctum sanctorum is Swayam vyaktha Vigraha and kshetrams of the world. Swayam Vyatka means God appearing in the Archa (deity) form on his own. Puranas like Varaha Puranam highlight the greatness of this place and Lord Venkateswara.

The sloka tells us: There is no place in the entire universe that equals Venkatadri, the place where the Lord resides and there is no God, neither in the past nor in the future who equals Lord Venkateswara.

The above Sloka is emphatically telling us, “The One Who is born as Sri Lakshmi Narasimha in Krita yuga; as Raghunandana Sri Ram in Tretha yuga; and as Vasudeva Sri Krishna in Dvapara Yuga; is again born as Sri Venkateswara in the Kali yuga”.

Devout Hindus believe Lord Sri Venkateswara is not only the ruling God of this Kali Yuga but is also the sole savior of our humanity and this universe. He only can solve all our human problems and He only can guide us through the ocean.

As Devotion knows no boundaries and the significance of ‘Srinivasa Kalyanam’ today, has spread to overseas and devout Hindus are eager to witness much awaited celestial Marriage of Lord Venkateswara.

Devotees believe that Srinivasa Kalyanam wherever it is performed, the land and the people are blessed with peace and prosperity. With this Srinivasa Kalyanam, the people of Georgia and neighboring states will get a rare opportunity to witness the Divine Wedding of the Lord and His consorts. ‘Srivari Kalyanam’ is a unique opportunity for devotees to participate in a solemn ritual without any distinction of caste or creed. Srinivasa Kalyanam ensures prosperity of the entire country. The rituals followed are exactly same to the one carried out during Hindu marriages. Lord Srinivasa is the lord of lords. The ritual of Kalyanam is a great significance. Thousands of devotees will participate in the ritual conducted on the specially decorated raised platform. Celestial wedding of Lord Balaji is generally performed for our welfare and fulfillment of our desire