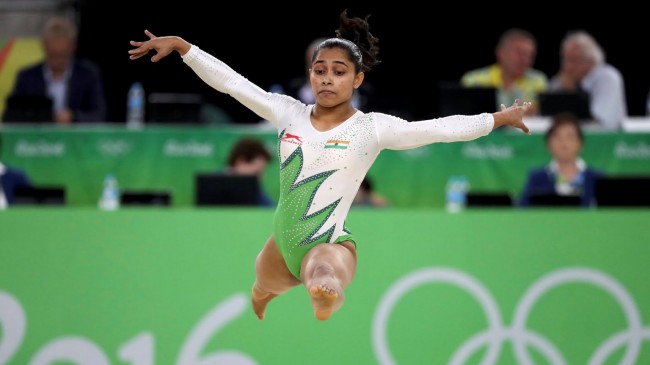 Agartala, Aug 8 (IANS) Gymnast Dipa Karmakar’s parents in Tripura are overjoyed over their daughter making it to the Olympic final, the first Indian woman ever to do so, and are praying for her victory at the final.

Her father, a former Sports Authority of India coach in weightlifting, and mother will perform a special puja to pray for her victory on Tuesday, when Dipa turns 23.
“This exciting news of Dipa’s qualification for the Olympic final has not only stirred us but will cheer every Indian, and especially the people of Tripura,” Dipa’s father Dulal Karmakar told IANS.
“Our long cherished dream is fulfilled, as our daughter got the berth for the final event in the highest international sports meet,” Dipa’s mother Gauri Devi told IANS, as tears of joy rolled down her cheeks.
Gauri Devi said: “Tomorrow (Tuesday) is Dipa’s 23rd birthday. As our daughter is away from home, we will perform a puja for her victory at the final.”
Dipa Karmakar made the entire country proud as she scripted history to become the first Indian woman gymnast and the first Indian gymnast to enter the Olympic finals at the 31st Olympic Games at Rio de Janeiro on Sunday.
Dulal Karmakar said: “Throughout Sunday night we along with our relatives and neighbours sat in front of the television set. We got the news early on Monday of her qualifying for the final.”
He said that before the event began, Dipa telephoned them and said she was a little nervous.
The young woman qualified for the final round in the individual vault final of artistic gymnastics after finishing eighth on the vault standings. She will compete in the final on August 14.
The news has gripped Tripura since early Monday after news of Dipa’s success spread across the state through television and mobile phones.
Tripura Chief Minister Manik Sarkar, a sports lover, told IANS: “It is a matter of great pride and joy. I would not give her any advice as she is capable enough to deal with her affairs.”
“Not only Tripura and India, the entire world is keen to see her performance in the artistic gymnastics event,” Sarkar said.
Congratulating Dipa and her coach Bisweswar Nandi, Tripura Sports Minister Sahid Chowdhury said that Dipa’s success in gymnastics has made the people of Tripura and all Indians proud.
“We wish her good health and success in the final event on August 14. Entire India is hopeful that Dipa would get a medal and script history,” a smiling Chowdhury told IANS.
Dipa is only the second Indian gymnast to have won a Commonwealth Games medal (2014).
She finished fourth in the Asian Games in the same year and then won bronze at the Artistic Gymnastics Asian Championships in Japan in 2015.
A five-time national overall individual champion between 2010-2014, Karmakar was given the Arjuna Award last year.
Besides being the first Indian woman, she is the first Indian gymnast qualified for the quadrennial extravaganza after a gap of 52 long years.
The last time Indians participated in gymnastics in Olympics was way back in 1964, but during that time there was no qualification system in place. Six men competed at Tokyo 1964 in the artistic individual all-around category.
Till date, 11 Indian men gymnasts have competed in the Olympics — two in 1952, three in 1956 and six in 1964.
The Election Commission has appointed this ace gymnast as Tripura state’s election icon to popularise election-related matters and encourage participation of more people in the poll process.
Tripura’s sports and youth affairs department promoted her to Sports Officer from Physical Instructor last year.