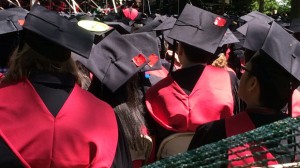 New Delhi, June 5 (IANS) In a show of solidarity with victims of sexual assaults in India, students of Indian origin graduating from Ivy League universities in the US wore a red tape on their graduation caps during convocation ceremonies this week.

Later, several students from Columbia University, Harvard University and Brown University participated in a peaceful protest against the rise in sexual violence in India, especially in the north Indian state of Uttar Pradesh.

“Respect for a women’s dignity is respect for humanity. And that respect starts at home, spreads through communities, extends across university campuses to nations around the world. An assault on one woman is an attack on the entire human race,” Arnab De who completed his PhD from the Columbia University Medical Centre and also served as the student representative of the Public Safety Committee at Columbia, told IANS over phone from Washington.

“There is nothing anyone can do to bring the bravest Nirbhaya (Dec 16, 2012, New Delhi rape victim) back. But if I can invoke her memory to educate people, I would be very proud. In this regard, I am glad that the Nirbhaya trust was recently launched to help victims,” he added.

Social media Buzzfeed quoted a spokesperson for Columbia University as stating that it was “a hallmark of Columbia’s values to support and encourage the rights of students to express their views through such peaceful, symbolic speech”.

The event was conceived by Indian-American Rakhi Agrawal, a student at Columbia University. She asked graduating students to put red tape on their graduation hats to show solidarity for such victims.

“As a student of this great university, I felt it was my responsibility to stand up for the basic rights of others. I am happy that our efforts have multiplied and graduates from other Ivy League universities like Harvard University and Brown University wore red tapes during their graduation convocation too,” Rakhi, who is originally from New Delhi, said in an e-mail to IANS.

The Nirbhaya case dates back to Dec 16, 2012, in South Delhi when a 23-year-old female physiotherapy intern was assaulted and gang raped by six attackers in a private bus.