UPDATE: Dec 30: New Indian government advisory to all Indians travelling to the US

Washington, Dec 29 (IANS) Amid reports that 20 more Indian students were deported Sunday, this time from Chicago, the Telugu Association of North America (TANA) has advised students from India to come well prepared in view of the heightened scrutiny at US airports.

TANA officials have been working with the Indian and US authorities to resolve this crisis, TANA president V. Chowdary Jampala said in a statement.

“We do not feel that there is any reason to worry for genuine students that are intent on pursuing their studies, respectful of US Immigration laws and regulations,” he said.

All students coming to the US on new F-1 visas are being screened thoroughly at the airports, TANA said. Most of these students are being allowed entry after they satisfy the immigration authorities of their credentials. 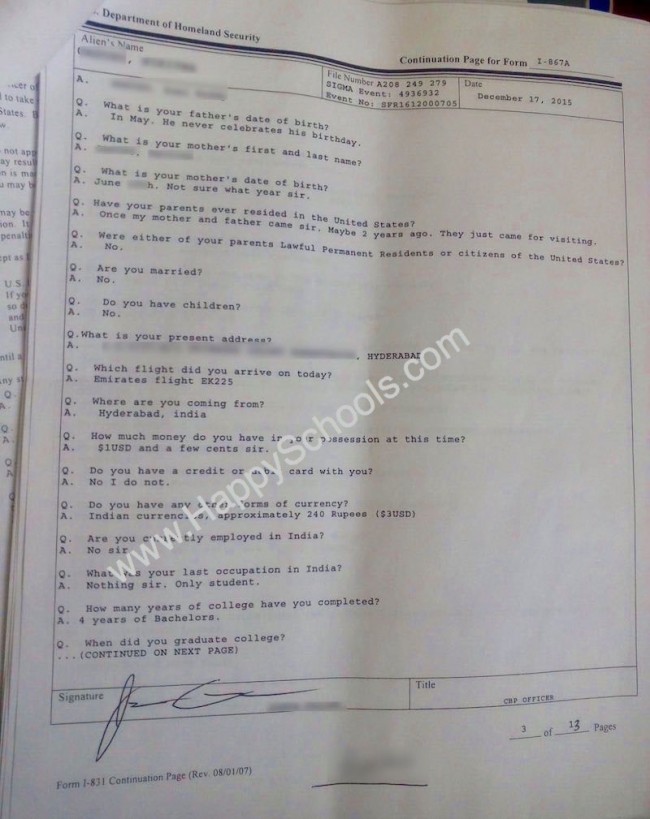 However, a few students have been denied entry at various airports for varied reasons, including failure of the students to speak confidently about what they plan to study, where they plan to live and how they plan to meet their tuition and living expenses, it said.

Some of those denied visa were not able to demonstrate having adequate financial resources and told the immigration authorities that they planned to get part-time jobs which is not allowed by the law, TANA said.

Some students had with them documents like applications for Social Security numbers, leading to questions about their intentions.

In some cases, some of the documents furnished by the applicants could not be verified and were suspected to be fraudulent.

Jampala urged the students and their families to note that student visas are given to pursue studies, they are not for working in the US.

There are limited circumstances in which an F-1 visa holder may work with the educational institution’s approval and supervision, TANA noted. Any illegal activity may cause detention, revocation of visa and deportation.

India has officially questioned the deportation of some Indian students, largely from Andhra Pradesh and Telengana when they came to the US with valid student visas to study at two Silicon Valley institutions which have denied being “blacklisted”.

The Indian embassy here has taken up the matter with the State Department, the National Security Council and the Department of Homeland Security.

As many as 14 Indian students who were deported recently and 19 others not allowed to board their Air India flights to San Francisco had all sought admission to Silicon Valley University (SVU) in San Jose and Northwestern Polytechnic in Fremont.