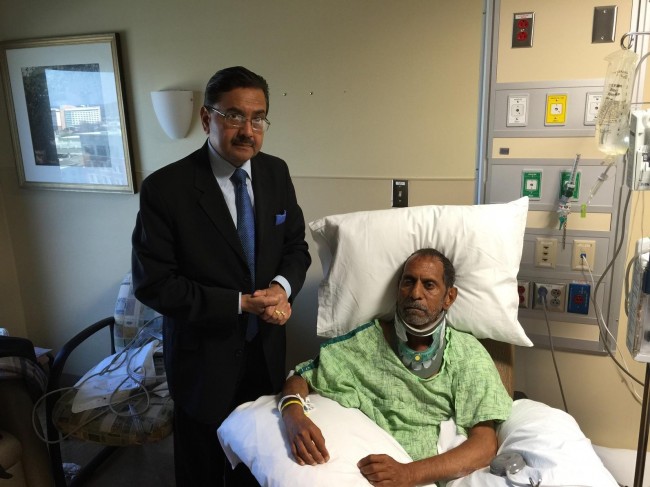 Atlanta GA: Sureshbhai Patel, the 57-year-old Indian national whose assault by Madison County police officer Eric Parker garnered international attention, is now in a rehabilitation facility in Hunstville with a long and uncertain healing process. Briefing the local community media recently about Sureshbhai’s condition and the efforts of the consulate and the Indian community in the region to provide support to the Patel family, Consul General of India in Atlanta Ambassador Ajit Kumar said doctors predict the rehabilitation could take a minimum of six months.

In the meanwhile, NGO Asha Kiran and local community members are rallying around the family, helping where they can. While the GoFundMe campaign set up for Sureshbhai has now raised over $208,000, the Consul General also handed over a check for $8000 to Sureshbhai from the consulate’s community fund to help the family tide over immediate expenses.

“When I met Sureshbhai at the hospital, he could not shake hands with me properly. He could not hold a spoon or a bottle. He could not walk on his own. Sureshbai needs someone to care for him for the next six months. He needs a nurse, but that (hiring a nurse) will cost money,” Ajit Kumar said, adding that in his opinion, it was theMadisonCountythat is liable for the expenses.

Sureshbhai’s lawyer, Hank Sherrod, has in an amended civil rights lawsuit filed in federal court last week sought unspecified compensatory and punitive damages for the Feb 6 assault. It has dropped the charges against a second police officer, a trainee, and no longer accuses the department of making up the emergency call or hiding the dash cam.

Ambassador Kumar’s visit to Madison also included a meeting with Alabama Governor Robert Bentley who agreed to initiate a parallel inquiry into the matter and issue him a letter of apology. The letter, released a day after the meeting, expresses Bentley’s “sincere apology for this tragic incident to your government, Mr. Patel, and the citizens ofIndiawho reside and work in our state.”

Ajit Kumar also met Madison mayor Troy Trulock who apologized for the incident. “The mayor insisted that he was a friend of the Indian community and had even inaugurated theIndiafestival there in 2012. He said the incident was an aberration rather than the norm,” the Consul General said.

The Consul General also attended a community meeting organized by the Indians of Hunstville and Madison on the 14th, where the primary topic of discussion was how to avoid such an incident from repeating itself. The community had interesting ideas. While Ajit Kumar suggested that the police be trained in cultural sensitivity, other suggestions were that the elderly could carry a placard or wear a bracelet with their contact information and the message, “I don’t speak English”.

Consul Anil Kumar who attended the press conference organized by Madison police where the dashcam video was released, was present at the media briefing.