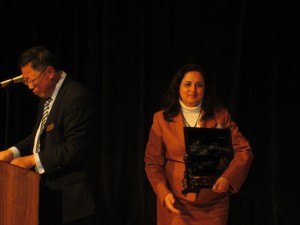 There are about 70 Confucius Institutes in the USA and the reasons for such a coveted honor for the Kennesaw State University is that, it set an unprecedented growth record from its inception to now, in just 5 years. “It is the undying support and commitment from a group of individuals that made this possible to achieve and I am reasonably confident that we will win the recognition this year as well” said Executive Director Ken Jin. 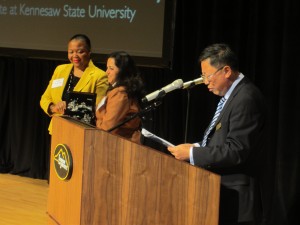 Besides a couple others from the State, Rifka Mayani; Faculty to the Program in Dance and an Award winning IT Administrator of the University, issued by Chancellor Hank Huckaby recently, was presented the CI 2013 Award by Ken Jin, for her continuous and vigorous support to the growth of the Confucius Institute in the past 5 years.

Since its launch in 2009, the Confucius Institute at the Kennesaw State University has: (1) organized more than 50 Chinese cultural performances, workshops, and events for students, faculty, staff and community members (2) secured grants from all sources in millions of dollars to support KSU’s global engagement initiatives and community outreach programs, which benefit the internationalization and economic development in GA (3) financially supported over 500 students; in high school and college, educational leaders and professionals –  to study Chinese language, culture, and best practices in education and (4) provided Chinese cultural and business workshops for companies including the Home Depot, UPS, Sodexo, and Atlanta Ballet.

In this school year (2013), the Institute offers 306 classes and has 7,162 students enrolled in Chinese language programs from PreK to college. CIKSU serves 20 schools in four counties:  Bibb, Cobb, Dekalb, and Hall, as well as at the GA Virtual School. CIKSU is also launching its first ever Chinese culinary art and martial art programs for students and the local community.