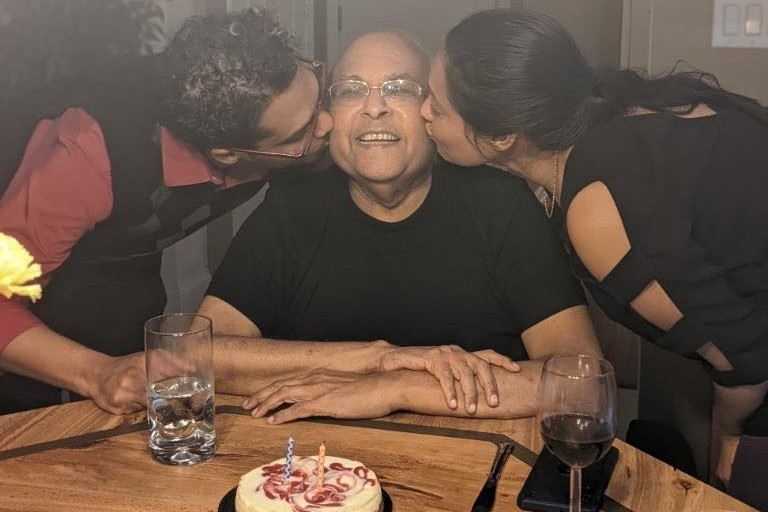 Atlanta, GA, July 18, 2022: Raju is not a spaghetti sauce, Kotak is not a digital camera (referring to Kodak camera), Raju Kotak’s trademark introduction through his wownow.com website speaks volumes about the kind of person he was – a marketing genius with a sense of humor.

An all too familiar face in the Atlanta media circles, Raju was born on February 14, 1952, the only child of Neela and Chandu Kotak. Born in Mumbai, India, Raju and his family had moved to Africa, Canada and finally landed in the US on December 5, 1973. He passed away on June 4th, 2022 at age 70, due to complications with his heart and lungs. He was surrounded by family at the time and went in peace.

Down to earth and earnest to a fault, Raju Bhai, as he was often referred to was Atlanta’s go-to person for any kind of South Asian reference, be it marketing, advertising, events, event halls, or contacts. Having poured his heart and soul into wownow.com, Kotak developed his website to extensively serve as Georgia’s primary South Asian information source, with total media solutions incorporating the Internet, video and social media for measurable results.

“In my 30 years of publishing for the South Asian community, I have never met someone as passionate about advertising and marketing as Raju Kotak! As an advocate of branding and the power of media to help businesses grow, he was a force to reckon with. His missionary zeal for the value of his work, his experience, and his expertise was contagious. Raju was generous with his advice and had helped many desi businesses make a name for themselves in the community. He was very successful in transferring his professional experience—gained from his positions as a senior account executive, first at the Atlanta Journal Constitution and then at the Gwinnett Daily News—to South Asian media and marketing,” notes Parthiv Parekh, Editor-In-Chief of Khabar magazine.

NRI Pulse has also been a beneficiary of Raju’s talents. “I first heard of Raju Kotak as the marketing whiz who had helped launch and grow Little India magazine into a household name in the Georgia market in the early 2000s. Over the years, NRI Pulse has benefited from Raju’s advice and innovative ideas, especially in the year before the pandemic when he joined our team as marketing manager. We will always miss him and his unique personality,” said Veena Rao, author and Editor-in-Chief of NRI Pulse.

Having spent hours on the phone with Raju discussing advertising/marketing for various events and organizations, I (author) had come to realize that not only was Raju passionate about his work, but equally generous in sharing information from his years of experience. I have personally referred Raju to so many people and if anything, they have said they received more than expected. Aparna Bhattacharya and her team at Raksha agree.

“He created our very first PSA and aired it on AVS. He has always found ways to support our work. His generosity and care for connecting community was invaluable. The Raksha community knows how important Raju’s contributions were and will miss his presence and support. We are grateful for all the ways he showed up for Raksha,” Bhattacharya said.

Founder of Raksha, Sonia Sharma agrees. “Raju was such an incredible person and such a great supporter of Raksha,” Sharma observed.

Tiffany Kotak fondly recounted some of her best moments spent with her dad including her time with him at Raksha’s events.

Kotak’s credentials were unique in that he had worked with the mainstream and South Asian media in equal measure garnering over 40 years of rich advertising/marketing/branding experience. His claim to fame was his successful assimilation into the mainstream while remaining rooted in South Asian media. Not many in Atlanta can boast of that.

His South Asian media experience was varied. Kotak worked with Asian Variety Show (AVS) where he launched their weekly television programs and created professionally produced commercials for clients, sponsorship of major concerts/events and extensive marketing. Kotak is credited for the launch of the Georgia edition of the national publication, Little India and the Southeast edition of India Abroad. Kotak worked with publications such as NRI Pulse, Khabar Magazine, and Rivaaj Magazine in Advertising/Marketing. “I have known Raju Bhai for many years. We have worked on many events together,” Mustafa Ajmeri, CEO, Global Entertainment and Media Services said, recounting the Asha Bhonsle concert in 1994 that they coordinated. “He (Kotak) was very knowledgeable and always presented fresh ideas for marketing. I join the community in expressing my heartfelt condolences for the loss of a great community and media member,” he added.

Who was Raju Kotak, the person?

“My father was a very loving person, He loved being involved in the Indian community. He loved family cruises and food and spending time with family,” Tiffany said. Her best memory remains the celebration of Raju’s 70th birthday together as a family along their mom, Alka, after 17 years. “My dad wanted us to be happy. He wanted both of his kids to be successful in business and life,” she added.

Bidding goodbye to an only son or any child, at any age, is perhaps one of life’s harshest facets. “Raju meant everything to me. Life without him is very different,” Neela Kotak lamented.

A successful entrepreneur who pursued his passion, having spent meaningful moments with family and friends, while working with/for the community, Kotak’s life was well lived.

One of Raju’s distinctive qualities was his ability to express himself with no inhibitions and to always let bygones be bygones. “Over the years, I have both tussled with him as a competitor, but also partnered with him. And in the process, I have learnt a good bit from him. On the phone, his knowledge and enthusiasm for our mutual work would often get the better of him, and since I couldn’t always sustain those calls, I enjoyed sitting with him at community events where we could chat at length,” Parekh remarked. And Parekh’s final words for him sum it all up – Raju’s loss leaves a huge hole in the community!