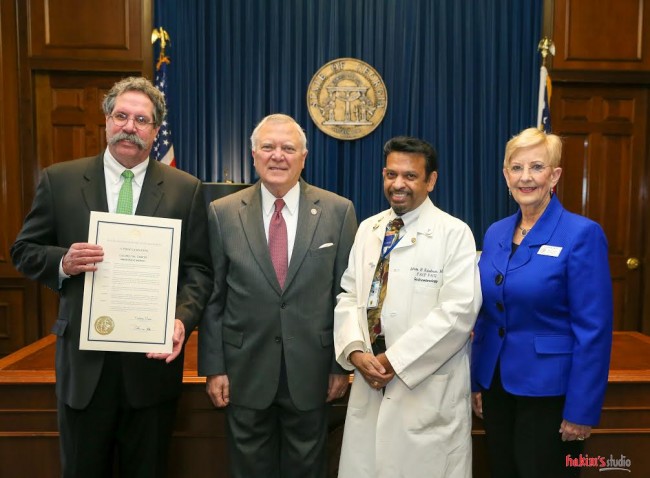 Atlanta, GA: March is national colorectal cancer awareness month.  On February 10, 2016, for the first time in the history of the Georgia Assembly, a physician of Indian origin addressed both chambers (the Georgia House of Representatives as well as the Senate), about the importance of detecting and treating colorectal cancer at an early stage of the disease.

Dr Indran Indrakrishnan, a clinical professor of medicine at Emory University School of Medicine in Atlanta spoke at length about the disease and measures to enhance colorectal cancer screening, first at the House of Representatives and then at the Senate.

President pro temp of the Senate, David Shafer, invited and introduced Dr Indrakrishnan to the Senate. Subsequently House Representative Brooks Coleman invited him to speak to the House of Representatives.

Dr Indrakrishan thanked the legislators for giving him the opportunity to speak about this important health care issue and told them that colorectal cancer is an easily preventable, detectable and treatable malignancy, yet remains the third leading cause of cancer deaths in the entire country including Georgia.

The incidence of this preventable cancer is about 50 per 100,000 and the death rate is 20 per 100,000 in Georgia, he said, adding that the compliance for colorectal cancer screening is alarmingly poor among Georgians. More than 90% of patients can be cured if detected early enough by appropriate tests.

Dr Indrakrishnan brought to the attention of the legislators a new fact that this cancer is becoming more common in people younger than age 50, although the standard recommendation is to start screening at the age of 50.  He urged the legislators and their supportive staff to talk to their constituents about regular health checkups, including colon cancer screening.

Dr Indrakrishnan explained to the law makers that this cancer usually develops from a benign growth called polyp, which grows on the lining of the colon- the large bowel. The polyp, with time grows larger and eventually becomes cancer.

Colonoscopy –a painless outpatient procedure done under light anesthesia – can detect and remove these polyps. Colonoscopy is recommended from age 50 as part of the physical. However, it is recommended sooner if any high risks or warning symptoms or signs are found.

Lieutenant Governor Casey Cagle thanked Dr Indrakrishnan for his contribution to the welfare of legislators and the Georgia community.  House speaker David Ralston also extended his commendations & appreciation to Dr Indrakrishnan and wished him health, happiness and many more years of service to the people of the great state ofGeorgia.

A colon cancer survivor, Steven Sadoti, who is a patient of Dr Indrakrishnan’s, received the proclamation declaration from the Governor. This is the third year in a row that Governor Deal has declared March as Colorectal Cancer Awareness Month inGeorgia at the request from Dr Indrakrishnan.

The speeches from both chambers were telecast live to the entire State Capitol via satellite TVs and were available online.

Dr Indrakrishnan told the media that he hopes his message and Governor’s proclamation will reach to the community and will improve the colorectal cancer screening rate in Georgia.

The compliance of colorectal cancer testing by public is not optimal in Georgia and is much lower in the Indian community. Being vegetarian is a healthy lifestyle, but this does not prevent the development of colorectal cancer, a common myth among Indians, he added.

In 2013, Dr Indrakrishnan was invited to ring the NASDAQ opening bell along with the Fight Colorectal Cancer Board  to increase the awareness of colorectal cancer and to  honor the organization.  In December of 2015, Dr  Indrakrishnan wrote an editorial article  on colorectal cancer  tilled   “Are you wearing the right Genes?- From Molecule to public health”     on  E-Cronicon  Gastroenterology & Digestive system  , an International  scientific Journal which  was well received by the scientists across the globe.  He was one of the   conveners of the successful Sunidhi Chauhan concert  which  raised funds  to help and increase the awareness  of common  cancers which include colorectal cancer.

Dr Indrakrishnan has his Gastroenterology private practice inLawrenceville,Georgiabesides his teaching faculty position at the Emory University School of Medicine. He is a past president of Georgia Gastroenterological Endoscopic Society and Georgia Association of Physician of Indian Heritage (GAPI).