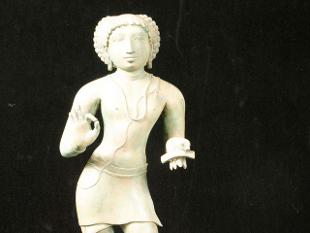 Washington, July 2 (IANS) A stolen 11th-12th century Chola bronze statue from India worth at least $1 million in the open market has been recovered by the US authorities during an international smuggling probe focused on an Indian art dealer.

An anonymous collector of Asian antiquities voluntarily surrendered the idol representing Saint Manikkavichavakar, the US Immigration and Customs Enforcement (ICE) said on Wednesday.

It had been looted from the Sivan temple in Sripuranthan village in Ariyalur district of Tamil Nadu.

The US authorities believe the collector is a victim in this situation because when the artefact was purchased in 2006, a false provenance was provided with the piece that had been manufactured to pre-date the idol’s theft, it said.

Special agents of US Homeland Security, ICE said, have tracked multiple false provenances provided by Subhash Kapoor, the owner of Art of the Past Gallery, who has been implicated in the probe dubbed Operation Hidden Idol, and which focused on Kapoor.

The former New York-based art dealer is currently in custody in India awaiting trial for allegedly looting rare antiquities from many nations.

This methodology of back-tracking an artefact to its theft site and searching out the smuggling methods from the source country to Kapoor’s US gallery has led to numerous recoveries, the ICE said.

To date, the US authorities have netted in excess of 2,500 artefacts worth over $100 million sourced from countries all around the world.

In addition to recovering this idol, the US authorities have also recovered at least six other sacred Chola bronzes that it anticipates forfeiting and repatriating to India, the ICE said.

He also underscored the need for a lasting partnership between the US and Indian law enforcement agencies “to more actively pursue individuals and syndicates involved in these transnational crimes”.

Yoga not just for body, but also brain: Researchers