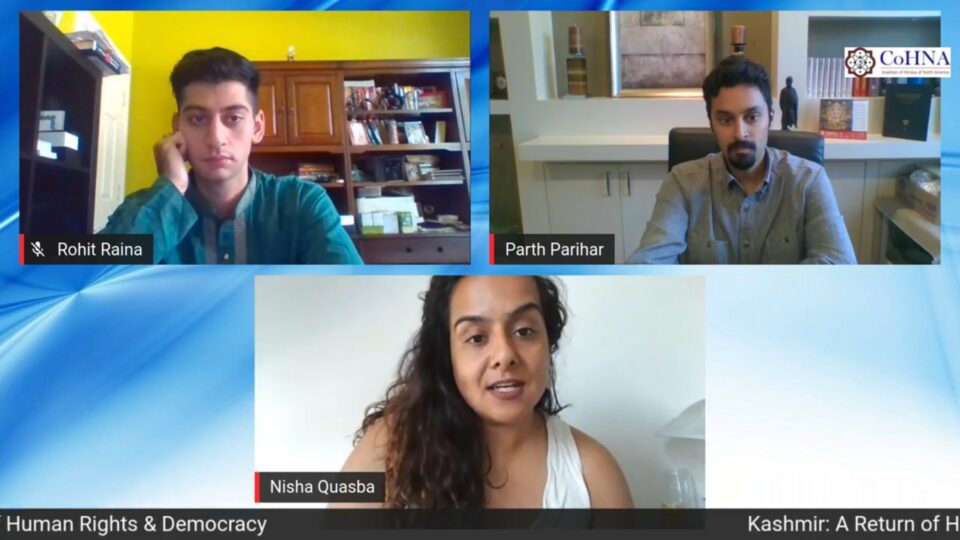 New Jersey, August 14, 2020: The Coalition of Hindus of North America (CoHNA) organized a two-day virtual conference, titled “Kashmir: A return to human rights and democracy” following the one year anniversary of the nullification of Article 370 /35A of the Indian Constitution and the restoration of human rights for marginalized minority communities in the Indian State of Jammu and Kashmir. Additionally, the conference explored the underlying history of Kashmir, in the context of the new governance model, and the dynamics of violence and strife in the region.

Well-known Director and Film Maker Vivek Agnihotri chronicled the genocide and exodus of Kashmiri Hindus, and discussed how Kashmir, once a seat of learning and philosophy, descended into a haven of radicalism and terrorism. Mr. Agnihotri summarized his thoughts by adding that ethnic cleansing by uprooting someone from their ancestral home is the biggest crime one can commit in the modern-day democratic world.

Noted author Dr. Rajat Mitra and human rights activist Gokul Kunnath, discussed the need for documenting, discussing, and reconciling transgenerational trauma in order to digest fast-paced events that impact the collective psyche of persecuted people across generations. Drawing from years of experience working with Kashmiri Hindu refugees, Dr. Mitra touched upon how they have been gaslighted and made to feel that they were responsible for their own situation. He illustrated how such attempts of pinning the blame on the victims can lead to devastating consequences. Mr. Kunnath discussed how instances of atrocities against Hindus often go undocumented – either due to the destruction of evidence or the generally non-confrontational nature of Hindus. Calling upon the community to act, he said, “this is the time for awakening. We have contributed a lot to the world, but we must also acknowledge our suffering. We have been victims of violence and genocide. We have to stand united and raise our voices.”

A panel featuring Kashmiri Hindus Ashish Dhar, Swapna Raina and Dr. Surinder Kaul shared personal stories of trauma and experiences of the community. An emotional Ms. Raina recalled how her grandfather was shot dead in broad daylight by radical Islamic terrorists, and how previous corrupt administrations in India denied justice or failed to acknowledge the wrongs done to the small and rapidly disappearing Kashmiri Hindu community. “It is inhumane,” shared Ms. Raina. “Nobody should be asked to show proof of their loved one’s murder. We, Kashmiri Hindus, are living proof of these senseless killings.”

Noted columnist Sunanda Vashisht and author Sanjay Dixit educated viewers on the historic dynamics and nullification of Article 370/35A of the Indian Constitution. Ms. Vashisht shed light on media bias when it came to Kashmir, adding, “this is the only ethnic cleansing and exodus that has been witnessed in independent India. But we don’t get any sympathy or recognition from the media.” Mr. Dixit outlined historical facts going back several hundred years to present day, in order to provide linkages between events of the past and the current situation leading to nullification of Article 370/35A. “Raliv, galiv, ya chaliv (convert, die, or leave) has been said in Kashmir and in India for the past millennia. This is nothing new. We need to wake up and counter these divisive forces of religious bigotry.” Prior to the nullification of Article 370/35A, over 500 Valmiki Hindu families, 11,000 Gorkhas and 150,000 refugees from the 1947 partition era were treated as second class citizens in the Indian State of Jammu and Kashmir. They were not allowed to vote, had no land/property ownership rights, and were kept away from state employment and other benefits. Women could not buy real estate and transfer property to children if they married non-Kashmiris. People of Ladakh also felt discriminated due to Article 370/35A. Despite false propaganda around the nullification of Article 370/35A, these and other communities have welcomed restoration of their human rights as well as a more democratic social order.

Nisha Quasba and Rohit Raina discussed issues faced by Kashmiri Hindu youth in the US. Expressing shock around the protests surrounding Article 370/35A and the resulting bigotry, Ms. Quasba added: “I grew up being very proud of my Kashmiri Hindu identity. We did not realize how Hinduphobic the mainstream media and the western narrative was until last year.” When challenging such narratives, both the panelists shared how they were shunned out of events discussing Kashmir, were subject to slurs and hatred, and were even told that they were right wing extremists.

A prevalent theme of the conference was the urgent need to catalogue the trauma, through interviews, stories, movies and much more, so that the memories and experiences do not vanish away with the survivors, much like how the global Jewish Diaspora has done. Ms. Vashisht, a strong and prominent voice in this area, was clear that the rehabilitation of Kashmiri Hindus in the valley cannot be a reality unless the Indian Government takes stringent steps to re-educate the youth of the valley and the general public of India that it was not a migration. “We are not migratory birds” she said, “to leave our homes of 5,000 years and go to New Delhi and struggle to settle there.”

Through this conference and releasing relevant infographics and articles on its website, CoHNA will continue creating resources to educate the public on the importance of understanding and documenting transgenerational trauma faced by Kashmiri Hindus in order to preserve stories of genocide and ensure that future generations appreciate the struggle for basic rights of religious freedom and dignity. These are available at https://cohna.org/kashmir-after-article-370/.