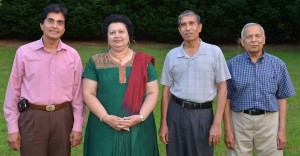 The Brahmin Samaj of Georgia, Inc. encompasses & represents individuals of Asian Indian Brahmin descent & various Indian American Brahmin cultural groups across Georgia. The Brahmin Samaj of Georgia, Inc. is a local organization that helps furnish, maintain, and protect the infrastructures that promote the support to the Indian American Brahmin community members in general and its member’s welfare at large.

The Brahmin Samaj is based on Indian culture which tries to bring awareness and values into the main stream of fellow Brahmins and Indians. The Brahmin Samaj of Georgia, Inc. organize programs Shivaratri, Camping, Summer Picnic and a Diwali Milan. The Samaj works towards a social fabric of day to day activities of Brahmins and other Asian Indians.