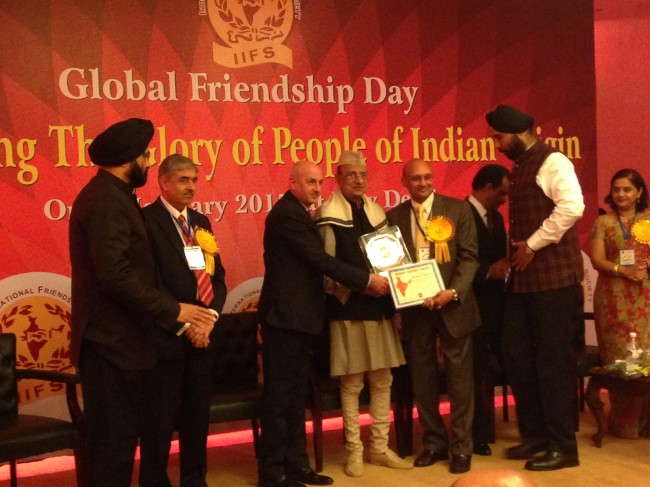 Atlanta GA: Shiv Aggarwal is one of the high profile, respected and loved faces in the Atlanta community. Articulate, genial, courteous, modest and hospitable Aggarwal is a dynamic, innovative, multi-tasking real estate entrepreneur, owner and CEO of Atlanta’s iconic Global Mall, social activist and a large-hearted philanthropist ever willing to support worthy humanitarian causes to help the community.

On January 6, 2015, Aggarwal was bestowed with the prestigious Bharat Gaurav Award at the Le Meridian in New Delhi, by the India International Friendship Society, which held its Annual Global Friendship Day and the Bharat Gaurav Award Ceremony. The event kickstarted with an inspiring speech by the Chairman of IIFS and the former CBI Director Sardar Joginder Singh. He discussed his work as a CBI director and the growth he has seenIndiamake over the last few decades; told many stories of his encounters with NRIs all over the world who are making great achievements in various fields. Singh was followed by other dignitaries motivating the audience with achievements of their own. Dr. Bhishma Narain Singh, the former governor of Tamil Nadu andAssam, recited the words of Gandhiji, “Respect your mother, your mother tongue, and motherland”. 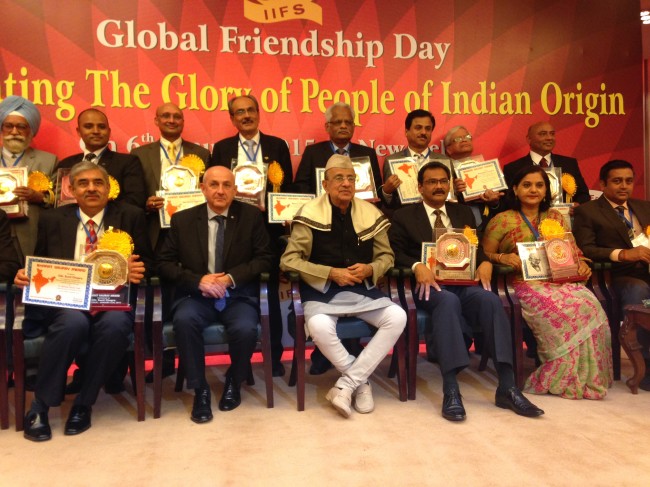 The Bharat Gaurav Award is given every year in recognition of contribution and dedication to worthy causes and achievements in keeping (the flag of India high) making Indians proud around the world. This year, Shiv Aggarwal was chosen to receive the Bharat Gaurav Award, along with only 22 other individuals from all over the world. Aggarwal won the award for his achievement in bringing the South Asian community in Georgia, as well as the Southeast together through the medium of Global Mall and his contributions to many non-profit organizations, such as Ekal Vidyalaya and VHP. The awards were presented by Dr. Bhishma Narain Singh, the former governor Tamil Nadu and Assam, along with multiple other dignitaries from around the world. The event was followed by a traditional Punjabi dinner and drinks.

Punjab born Shiv graduated in Business Studies from Delhi University and immigrated to Baton Rouge,Louisiana in 1982 where he launched his business career in real estate. Due to the economic downturn, he moved to Atlanta four years later. He honed his entrepreneurial skills by dealing in shopping centers, office complexes and residential apartments.

When Aggarwal acquired the Global Mall it was a rundown 222,000 sq. ft. two-storey health and fitness mall, which he renovated and refurbished.  The mall is now Atlanta’s favorite business, social and cultural beehive. It is the first premier indoor South Asian Mall in North America. It has over 800 parking spots and a weekly attendance of 6000 to 8,000 people. Aggarwal’s dream initiative-Global Mall’s Global Mela is a signature event eagerly anticipated by the Atlanta community. The 15th Global Mela attracted over 15,000 visitors.

Aggarwal is also president of the Ekal Vidyalaya Foundation  for which he has hosted many events to get sponsorships for Ekal schools. He is also a member of the Vishwa Hindu Parishad (VHP) and a life member of IACA.

Under Aggarwal’s chairmanship of the Board of Directors for the Gwinnett Village C.I.D. (Community Improvement District) for the past several years, projects aimed at improving the quality of life of the Gwinnett County residents by better infrastructure, police protection, and beautification by landscaping and streetscaping of the county have been successfully implemented.

Humanitarian and compassionate Shiv is ever willing to give accommodation in the Global Mall to non-profit organizations. He has also leased space rent-free to GAPI volunteers clinic and for the GOPIO office.

Aggarwal’s entrepreneurial acumen and social activism and philanthropy have not gone unrecognized. His services have been recognized by IACA, GOPIO, VHP of America, GA Asian Times etc. He was recognized by the Gwinnett Chamber of Commerce as one of the top 50 finalists for “Pinnacle Top 25’for extraordinary growth and contribution to the community.

Shiv and Anushi have a son Vishal and two daughters Aarti and Vandana.