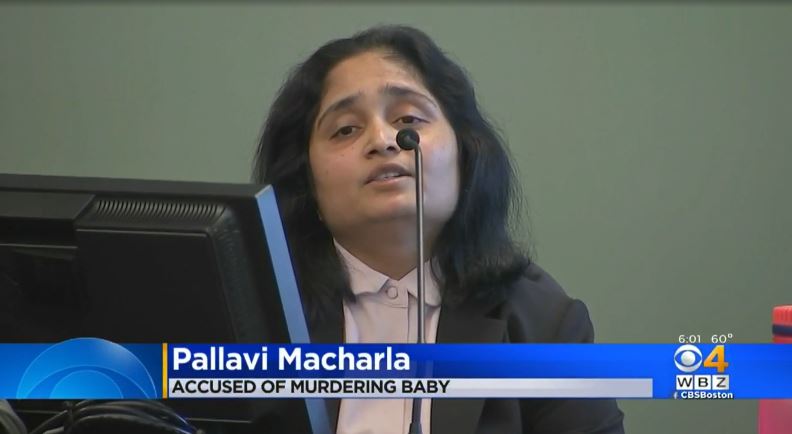 Atlanta, GA, May 15, 2019: An Indian-American mother of two in Massachusetts was convicted of second-degree murder in the 2014 shaken baby death of a six-month old she was baby-sitting.

Pallavi Macharla, 44, handcuffed and sobbing, was sentenced to life in prison. She will be eligible for parole in 15 years, reports the Boston Globe.

Macharla ran an unlicensed daycare center out of her Burlington home and was responsible for the baby, Ridhima Dhekane, who died on March 27, 2014, officials said.

Prosecutors said Macharla, who worked as a medical doctor in India before moving to the US, became frustrated with baby Ridhima Dhekane because she was fussy and shook her violently, causing her brain to bleed.

But Macharla’s defense insisted the 6-month old had vomited shortly after she fed her homemade applesauce and had no visible signs of trauma when she was brought to the hospital.

Macharla started performing mouth-to-mouth on the baby but didn’t call 911. Instead, she called the baby’s mother who arrived several minutes later, according to media reports.

The infant, who was taken to Boston Children’s Hospital, died three days later.

Initially, Macharla was accused of shaking the baby, causing fatal blunt-force trauma. But the medical examiner who performed the autopsy later changed the cause of death to “undetermined.”

On Monday, Macharla’s husband, Anthony Vakamalla, sobbed from the back row of the courtroom, according to the Boston Globe. He was surrounded by tearful friends.

Defense attorney J. W. Carney Jr. said he would appeal the verdict. Speaking to reporters after the verdict, he slammed the medical community for adhering to a science he said was outdated.

US healthcare firm to open senior living homes in Bengaluru