Atlanta, GA, Aug 27: Kolkata-born A. J. Banner has been described as a phenomenal new voice in suspense fiction. Her psychological thriller, The Good Neighbor, has already garnered over 1200 reviews on Amazon, even before its official September 1 release.

Set in the fictional town of Shadow Cove, Washington,  The Good Neighbor, with a fast-paced plot and unexpected twists and turns, follows the story of a young woman, Sarah, who suffers a tragedy and is forced to question everything she thought was true about her friends, her neighbors – and even her husband.

In an email interview with NRI Pulse, A. J. Banner talks about her love of crime fiction, her experience writing her first psychological suspense novel, and her Indian roots.

When did you discover that writing is your calling in life?
I loved writing from the moment I could put a crayon to paper. When I was seven, I wrote about a stray dog I wanted to adopt in Puri, on the Bay of Bengal. At twelve, after I read The Diary of Anne Frank, I started keeping a journal. I read Agatha Christie and typed silly mystery stories on a toy typewriter. As a young adult, I stopped writing fiction for a time to pursue other possible professions, but I eventually returned to writing. Writing is my joy and of course, my work. Kahlil Gibran wrote in The Prophet, “Work is love made visible.” I truly believe that.

Why did you decide to write a psychological thriller? How is it different from writing other genres of fiction?
I’ve always loved reading psychological thrillers, or any suspenseful novel. But I particularly love stories in which the protagonist suffers from amnesia or trauma so that her perceptions might be unreliable. I wanted to write the kind of book I love to read. I should qualify that by saying I love to read in many genres, including literary and humorous fiction and children’s books. Among the children’s books I love are the ones with unexpected twists and turns, like I am the Cheese and When You Reach Me.

Did you have a process for writing ‘The Good Neighbor’? Did you spend a lot of time drawing a plot outline, or did the story take shape as you went along?
My process was all over the map. I tried and failed to write an outline, tried and failed to write a draft that included magic realism (don’t ask) and even time travel. I rewrote the story in radical ways over a couple of years, although you won’t know it when you read the book – I hope. I settled on the current story-line through trial and error, adding scenes and discarding them. But I knew the ending fairly early in the process. 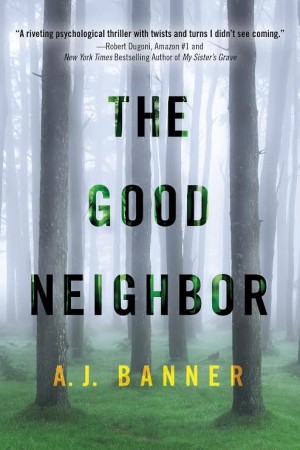 Did it take a lot of rewriting and polishing to build the intrigue and the undercurrent of deception?
I’m glad you think the book includes intrigue and an undercurrent of deception. I read the manuscript so many times; I lost any sense of how the first-time reader would respond to the book. I rewrote scenes to increase tension, de-emphasize bits of foreshadowing and emphasize others. Writing my first psychological suspense novel has been quite a learning experience. I had a lot of help from my writing group, editor and agent.

Do you draw from your real life experiences while building characters? Do you see a little bit of Sarah in yourself? Is the character of Dr. Johnny McDonald based on somebody you know?
Well, yeah, Sarah is a bit like me. How did you guess? She loves to write, loves to walk in the woods. She’s pretty much my clone. I’m kidding, but she is a little like me. There’s a bit of me in every character, which is a worry if you consider the mental state of the perpetrator. Okay, there’s a bit of me in every character except the perp. The doctor is an amalgamation of different people I’ve known.

Does the town of Shadow Cove really exist?
Unfortunately, Shadow Cove does not really exist, but towns like Shadow Cove do exist here on the Olympic Peninsula in Washington State– forested, picturesque, misty towns with spectacular views of the mountains and ocean. I love living here. Shadow Cove is a composite of a few local communities.

Who are your favorite crime/thriller writers? How have they influenced your writing?
I love too many thriller writers to count. Most recently, I’ve loved S. J. Watson’s Before I Go to Sleep, Robert Dugoni’s My Sister’s Grave, A. S. A. Harrison’s The Silent Wife, Alice LaPlante’s novels like Turn of Mind. I’m influenced by authors like Daphne du Maurier (Rebecca, My Cousin Rachel) and Joy Fielding (See Jane Run, Whispers and Lies).

Let’s talk about your Indian roots.
I was born in Calcutta (now Kolkata), and my parents brought me to Canada when I was a couple of months old. We returned to India a few times over the years. I now live in the Pacific Northwest, near Seattle. The magic of technology allows me to stay in touch with relatives through Facebook and texting on my iPhone, so I feel more connected to my Indian roots now than I felt when I was growing up.

I’ve always enjoyed reading fabulous Indian authors like Bharati Mukherjee (I especially loved her novel, Jasmine, which I will read again), Jhumpa Lahiri, Rabindranath Tagore, Anita Desai (Fasting, Feasting), and I’m reading a delightful recent novel by Jay Antani called The Leaving of Things. Three Continents by Ruth Prawer Jhabvala also made quite an impression on me. In the realm of children’s and young adult novels, I enjoy many accomplished authors like Mitali Perkins and Uma Krishnaswami.

Would you like to see your novel adapted for the big screen?
I would love it, of course. Film rights inquiries should be directed to my literary agent, Paige Wheeler of Creative Media Agency, Inc.

What’s next for A. J. Banner?
I’m finishing a draft of my next psychological suspense novel. Stay tuned!