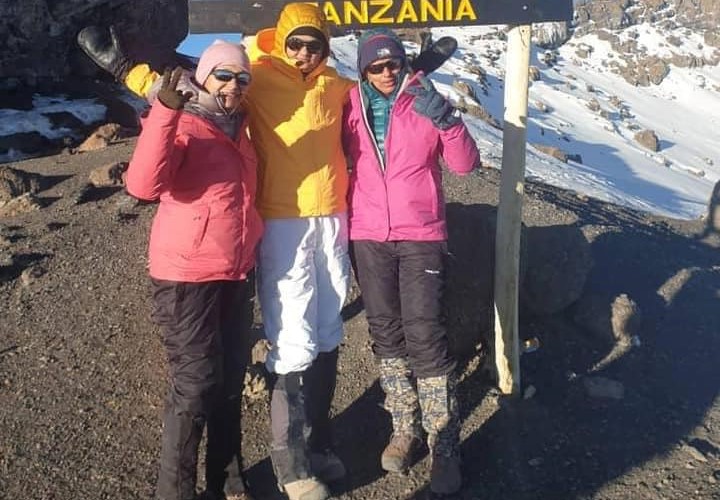 Atlanta, GA, April 8, 2022: “The best views come after the hardest climb,” goes the saying. Many of Atlanta’s Indian American Trekking enthusiasts couldn’t agree more. While trekking/venture sports have not been popular vacationing/outing choices of community, the interest is certainly growing.  In an effort to encourage venture sports, IACA (India American Cultural Association) felicitated three women Gayatri Ayala, Kavita Reddy and Sirisha Lingareddy who summited Mt. Kilimanjaro in February of this year. The previous summiteer Girsh Desai was also present at the event. Johns Creek councilman Dilip Tunki, Dr. Aparna Kakarala, Lakshman Guttikonda, and Namita Tawde are a few other Atlanta residents who have scaled Mount Kilimanjaro in the past.

World’s tallest freestanding mountain, Mount Kilimanjaro stands 5,895 metres (19,341 ft) above sea level and about 4,900 metres (16,100 ft) above its plateau base. It is the highest volcano in Africa and the Eastern Hemisphere. Its shrinking glaciers and ice fields, projected to disappear between 2025 and 2035 has been subjected to many scientific studies. According to Tanzania National Parks, Kilimanjaro attracts 50,000 climbers a year, up 25% from 2008 and about 50 times the number attempting either Everest or Denali (formerly Mount McKinley) in Alaska.

On Kilimanjaro, hikers choose from six well-trodden ascent routes, which converge towards the summit. Two-thirds opt for Marangu or Machame, routes. The quieter reputation of the longer routes, Rongai, Lemosho and Shira, has made them popular. The steepest route, Umbwe, draws few. All but Rongai ascend the southern face of the mountain, and all climbers descend to the south.

“We took the Lemosho route. It is a 8 day route to the Uhuru peak and back. The reason we chose this is because, based on our research the success rate on this rate was very high plus we are giving our bodies enough time to get acclimatized,” noted Ayala. The ascent to the peak took them 6 days and about a day and half for the descent.

The terrain, Ayala describes varies from dense rain forests to the arctic zone with freezing temperatures. “The pictures hardly justify the spectacular views we witnessed.”

“Kavita, my neighbor and now my hiking buddy introduced me to hiking,” Ayala said. She and Reddy, both moms of two girls and IT professionals, say they did not require any special training but hiked North Georgia mountains every weekend without fail. And when they did not hike, they walked for at least 5- 6 miles. They also planned a few trips to Denver to observe how their body reacted to high altitude, understand the terrain, toughness and physical level required for be to climb. Overall, they invested 1.5 years in preparation. To persevere and never give up was Ayala’s takeaway from the experience.

“As I was becoming an empty nester, I wanted to ensure my passion to travel and do outdoor stuff was acted upon. What better option than hiking to take you to places and explore nature at its finest along with likeminded friends,” Reddy quipped. Reddy has always enjoyed Basketball/Tennis/ Athletics as a child.

“Nothing can prepare you to ascend (summit push) from 15000 ft to 19350 ft in few hours in the harshest of conditions,” Reddy remarked about the most scariest and the most exciting part of the ascent. Ayala agrees. The unknown factor was scary, they noted. There have been people who have been injured and succumbed to high altitude.

While Ayala sums up the experience at the summit as “emotional”, Reddy describes it “Soul satisfying”. How did they feel when they finally got there? “It was surreal and had not sunk in yet. Some hugs and tears with my fellow teammates and the awesome crew who helped us get there,” Reddy said.

While neither plan on summiting Kilimanjaro for the second time, they have “tons of plans” to hike one local and one international mountain every year.

“I remember camping high above the clouds and looking out west as the sun shined through the sky and cast its orange hue on the thick blanket of clouds. Soon it was dark and, you could see nothing but dense white fluffy clouds with a few streaks of city light peering through, like someone shining a torch through a woven blanket,” Tawde described.

Tawde, also a mom of a daughter and a Siamese cat and IT professional, spends her weekends hiking, backpacking the Appalachian trail throughout the year or trail running with her daughter. An athlete all her life and an NCC Cadet, she has earned 1st Dan Black belt in Taekwondo. Competing in 5 K runs, CrossFit and obstacle course racing, Tawde was physically well prepared for the hike. “For me, it was more mental prep as a solo traveler to a new country for a new and exciting adventure,” she noted.

“You need to be physically fit to enjoy the trek but, also mentally, love challenges that nature has to offer. The ability to step out of your comfort zone and be ready to experience nature at its best and worst, I feel, is a prerequisite,” she notes. Also opting for the Lemosho Trail of 7 days, Tawde, apart from Kili, also proceeded to the Serengeti and Ngorongoro crater after the trek, which was an additional 4 days.

The scariest moment, Tawde recalled, was the potential frostbite that almost had her off the mountain. “You are expected to wear layered clothing, not just on the body but also on the extremities.” On the final summiting night, as she climbed, the temperature dropped so quickly that the warm water in her Nalgene bottle turned solid rock within 30 something minutes. The sudden change also affected her fingers – ranging from aching to throbbing pain and then, just numb. The guide suggested that she may have to turn around because these appeared to be signs of frostbite. At that moment, Tawde had to dig deeper to draw strength from within and remains grateful that her hands responded favorably, as the body acclimatized in the following hours.

Feeling “Grateful” at the summit, Tawde says her takeaway was learning that “Each time you pass a new threshold, a new resistance, you build a new muscle.” In the future, she plans to climb Aconcagua.

“It’s not the destination but the incredible journey I experienced with friends/ crew and Africa!! Memories will last forever,” Reddy summated her takeaway. True that – be it mountain or life, as Conrad Anker puts it, “The summit is what drives us, but the climb itself is what matters.”