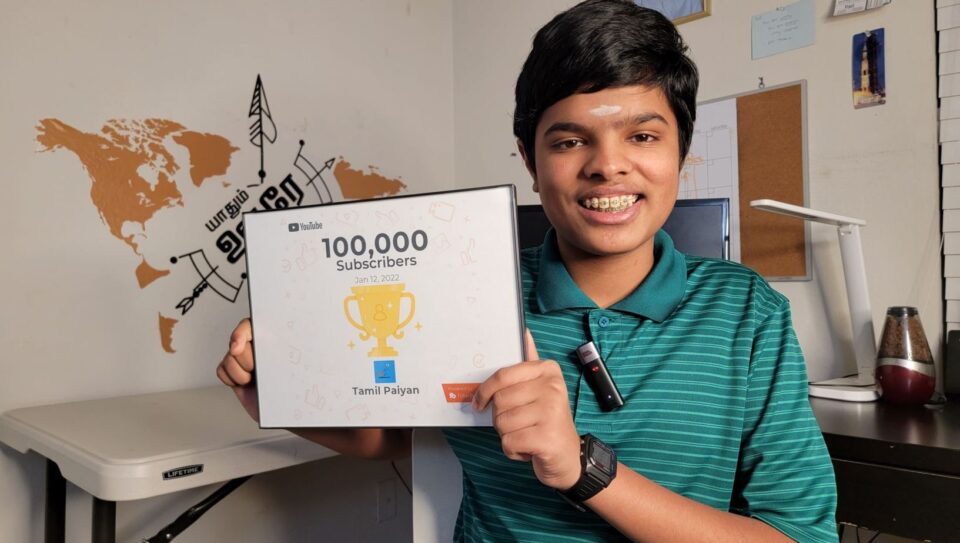 Atlanta, GA, March 23, 2022: Siddharth Raghavan, also known as Tamil Paiyan, is a high school freshman residing in Atlanta and boasts over 100,000 followers on his YouTube channel. He makes videos in well-spoken Tamil on everyday topics such as what high school in America is like, different types of food available, and even how Indian holidays are celebrated across the globe.

Raghavan’s videos have become extremely helpful to those who don’t speak English or people living in India who plan to come to the States. By providing background on topics that we may take for granted, he helps Tamilian parents make decisions on things ranging from what school supplies to buy, how to navigate the American school system, and how to plan for the future.

Two months ago, Raghavan hit 100,000 subscribers on his Youtube channel, a feat for which Youtube awarded him a Silver Creator Play button. This growth is no joke as he started January 2021 with just 815 subscribers and ended it with 98,000, representing 11,000% positive growth. His most viewed video has over 2 million views and features a tour of his school. His channel continues growing steadily as the range of his videos goes from school-related content to more food reviews and educational science videos.

Raghavan starts every video with the phrase, “Vanakkam nan ungal tamil paiyan!” which roughly translates to “Hello, I am your Tamil Boy!” and lets everyone know they have something new to look forward to that day. He places a lot of value on his mother tongue and has practice speaking proper Tamil. His videos don’t normally have subtitles, allowing people who speak English and are learning Tamil to get good listening practice dealing with concepts they already know.

Raghavan, who moved with his family to the US at the age of 8 in 2016, is successful in many areas outside of his YouTube channel. During his time at Webb Bridge Middle School, he won the Silver medal in the Fulton Tech Competition with the knowledge and experience he gained through social media. Following this, his principal gave him permission to make the viral video touring his middle school, jumpstarting the virality of his channel. Additionally, his work has been featured in several prominent Tamil magazines and papers, including Dinamalar and Thendral.
In the future, Raghavan hopes to continue his channel but also go into biology, and this is reflected in the multitude of science-related videos on his channel. To learn more about him, viewers can subscribe to his youtube channel linked here.