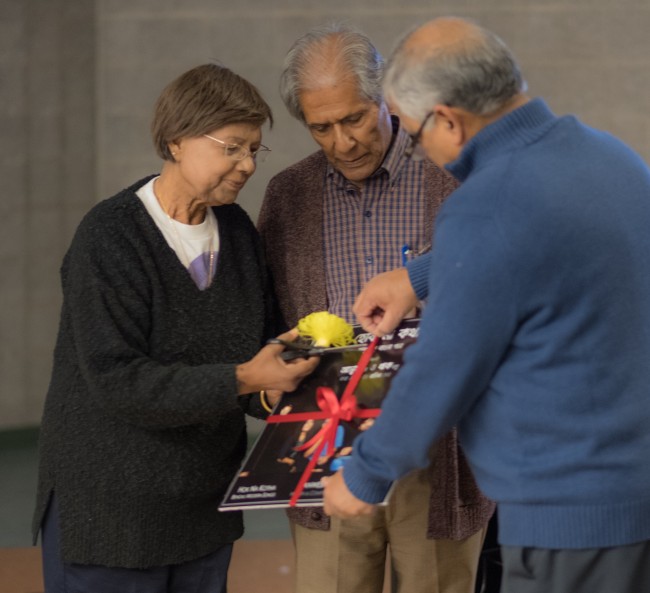 ‘Hok Na Kotha’ was released with much fanfare to a full house of supporters. The album was recorded in Kolkata, mixed/mastered in Mumbai and published by Asha Audio, the best-known music label in Kolkata, associated with the likes of Shreya Ghoshal and Shaan.

Asit N Sengupta, an architect by profession with several landmarks, including CNN Center, to his credit and Ashima Das, a music connoisseur presided over ceremonial ribbon cutting.

Dr. Sen’s manifestation of modern Bengali songs, ‘Hok Na Kotha’ is comprised of eight tracks, with two songs written by Dr. Tirthankar Dasgupta. Title song ‘Hok Na Kotha’(Let’s talk) is compelling, calming and cheerful. Dutta and Basu are at their melodious best playing off each other in their flawless renditions of contrasting versions of ‘Deep Jwale’ with Dutta in a soulful version and Rik in the electro, more upbeat version, retaining the melody intact. ‘Ogo Megh’ ‘Mahi Ve’, ‘Ogo Priya’, ‘Chaoya Paoya’, ‘Bideshi’, some with Latin and jazz influences offer a soulful, soothing, and satisfactory listen to any music lover.  The music is available online at https://www.youtube.com/watch?v=MQGpT_5iayg

Joining the audience on airwaves via Skype, Anwesha Dutta and Rik Basu were all praise for their composer. Incidentally ‘Hok Na Kotha’ is their first album together and Dutta’s debut album, too. “You have to own the song – Raktim uncle told me” said Dutta and she did. Her harmonious renditions are heartwarming, heartening and heartfelt. Basu is at his versatile best, his deep rich vocals perfectly balancing melodies of various genres. 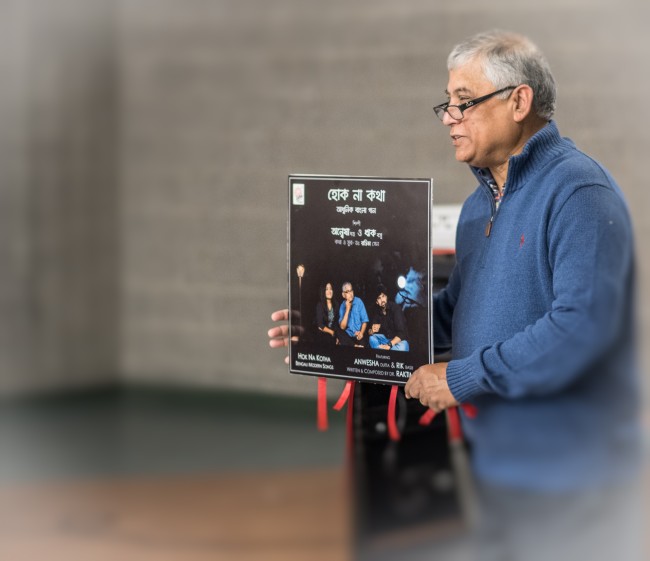 Man of many talents, Dr. Sen’s first composition, a Bengali modern, was published in 1982. He is a keyboard player, a published composer, lyricist, orchestral arranger, poet, playwright, short story writer and stage lighting designer. He is the Theatrical Director of Atlanta Theater Workshop, Inc where he directs plays and conducts acting workshops. He has scored theme music for NABC 2002, Festival of India, Atlanta (2003) and Bangamela 2010, theme song of BAGA. He is also the Program Director of Atlanta Indian Idol Contest.

“It all started in October 2015 in Atlanta. Rik was on his first US-tour, Atlanta being the first stop. We were doing music in my home studio when he floated the idea of a music album with some of my compositions.  Later in April 2016 when I was in Kolkata we put together a plan. We needed a female singer and Anwesha Dutta was our natural choice. We would rehearse during odd hours over Skype, write scores, discuss arrangements and work with our programmers, Subhodeep Sarkar and Partha Chakraborty,” said Dr. Sen, about the origins of the album.

In May 2107, Dr. Sen was in India recording vocals and acoustic instruments in Kolkata and mixing/mastering them in Mumbai. “In many ways, I felt incredibly fortunate and blessed to have the musicians and technicians work with me to give their best as well. Mahua Lahiri of Asha Audio, showed interest in publishing the album after listening to a few excerpts of the final mixes. She insisted on releasing the album during Durga Puja,” he added.

Initiated to music by his mother who was a sitar player, also recognizing his father’s insistence to further education, Dr. Sen taught himself to play the harmonica and the harmonium early on.

“I had an opportunity to formally learn the piano from a schoolteacher.  I enrolled at the Calcutta School of Music to continue learning the piano,” recalled Dr. Sen.

He turned out to be a dutiful son, mastering arts and science as an alumnus of Bengal Engineering College, Shibpur with a Masters and Ph.D. from Clemson University, SC with music albums and many other artistic talents to his credit. “Music has been my constant companion since I can remember. It has taught me to be universal. It is so abstract, yet it touches everyone,” he said.

“I am a perpetual student and like to dedicate sometime every day to learning something new. Learn the science and then practice the arts. Find a good teacher to learn the science.  When you practice, practice more what you don’t know well. When you perform, perform only what you know well! If you need the lyrics to sing, you are not ready. That is a sign that you need to practice more.  Whether you are performing or composing, be your own critic. Don’t be fooled by the “likes” you get from your friends,” is his message for aspiring artists.

Dr. Sen resides with his wife of 33 years, Munmun, who is a Special Ed teacher in Gwinnett County Public School. His son and daughter-in-law are both resident doctors.

‘A lonely cloud- it floats at ease, With the easterly breeze; Tomorrow it may drop as rain, to quench the thirst of a bird it sees,’ translates a line from ‘Hok Na Kotha’. We can only hope Dr. Sen’s thirst for the arts continues to find its rain drops of inspiration all through his artistic journey.