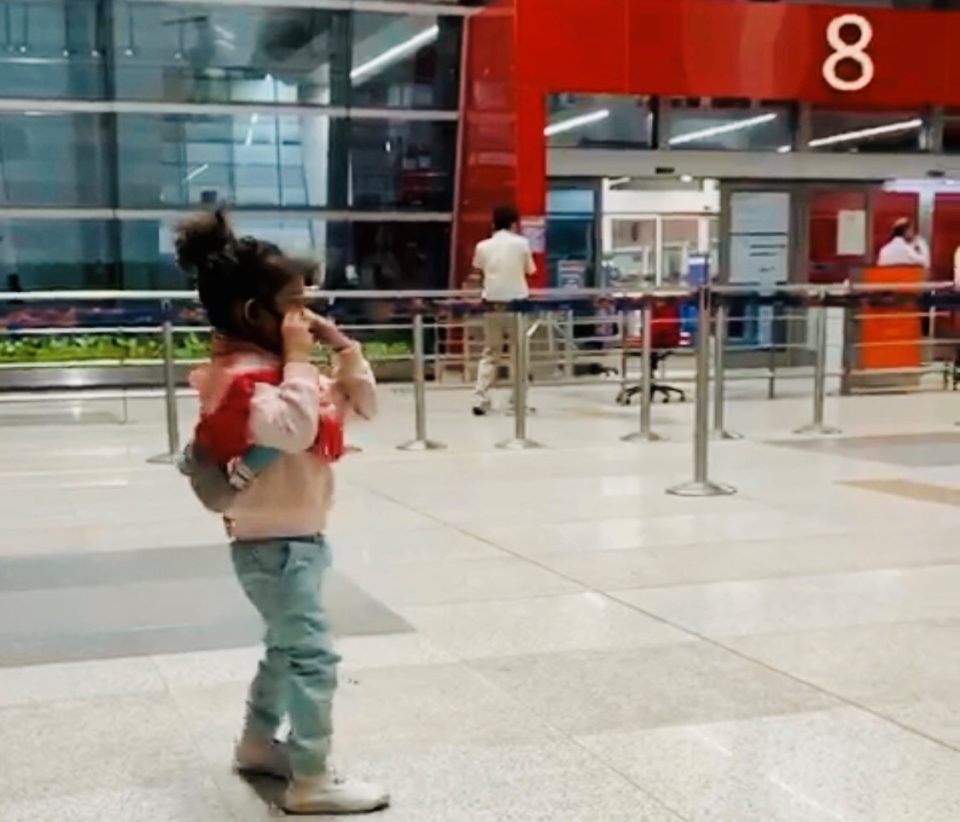 Cover photo: Three-year-old Miss A. was inconsolable when her family couldn’t get on the flight back to the US.

Atlanta, GA, April 29, 2020: The COVID-19 pandemic is becoming a quagmire for a young Atlanta family stranded in India because of the lockdown. They are now facing the prospect of losing their legal status in the US, if they cannot make it back before June 8.

“My wife, three-year-old daughter and I came to India on February 23, 2020 for a family wedding, and were scheduled to return to Atlanta on March 23, 2020, but due to the lockdown our flight was canceled and we are stuck here since,” the tech professional (name withheld to protect his identity) told NRI Pulse via email.

“Our attorney suggested that we get an extension after returning to the US, but now, with the lockdown getting extended every time we plan to travel, the risk for applying (for an) extension from the US is increasing.”

Adding to the prospect of legal trouble is the fact that he cannot work remotely from India, which means he has had to go without pay.

The family has been trying to get on one of the flights arranged by the State Department to airlift US citizens and green card holders out of India. Their daughter is a US citizen.

“We reached out to the US embassy in Delhi. They asked us to fill a form on https://tinyurl.com/uscit-india with our daughter as primary traveler and our details as her guardians,” the tech professional said.

“After submitting this form, we received two emails from the US embassy with the flight schedule, a link for updating the travelers’ details and a confirmation response that needs to be updated within 24 hours, which we did both the times.”

“The first time we tried to confirm our travel details, our request was rejected. Our passport numbers were not present in their system.”

“The second time we tried to confirm the details, we received a letter of safe passage (driver pass), promissory note (legal document that we will pay the cost of the ticket), COVID-19 health form (confirming we do not carry any COVID-19 symptoms). When we tried to confirm with the US embassy, asking if this is the final confirmation via email, we did not get a response.”

“Later, when we called the US Embassy, they confirmed that the email is indeed the final confirmation we needed to take the flight from New Delhi to San Francisco. So, we drove to the airport but when we reached there, the US Embassy had a desk set up outside the departure terminal and told us our names were not on the list and put us on standby.”

“We waited several hours at the airport at the end of which we were told to return home as the flight was full.”

“So, we came back and filled those forms again, but so far we have not received any email from the US Embassy.”

Immigration attorney Ashwin Sharma of The Sharma Law Office is of the view that the family must try to get back before June 8 so that they are not required to get new visas to reenter the USA.

“That would cut the consulate out of the picture which is important because of two reasons: a) US Consulates may/may not be closed and a visa may/may not be available, obviously there will be a delay in visa stamping. b) There is no premium processing available in H-1B cases and after June 8 they would need approval on any H-1B extension to be able to even get a new visa stamped to enter the USA,” he told NRI Pulse.

“I think there are strong and compelling reasons here, not just based on the US citizen child, but based on the financial/job loss possibility, and the fact that everyone is ready to leave India but for the flight,” he added.

The State Department’s Principal Deputy Assistant Secretary of State Ian Brownlee said on Tuesday that many US citizens and green card holders who had enlisted for repatriation from India were not responding to offers of seats on the planes arranged by the department to take them home.

“Two weeks ago, we had a list of folks and we were pretty sure if we called (the) folks they’d show up at the airport and say, ‘Yes, please.’ We’re now getting to the point on that list, we’re having to make multiple calls for individual seats because people are deciding ‘No,’ they’d just as soon ride it out where they are.”

The Atlanta tech professional we spoke to said there were at least ten people waitlisted like them, who were asked to return home, which implies that there were no ‘no-shows’, and the flight that took off from New Delhi was full.

The previous flights had many ‘no-shows’ and flew back near empty, which is why US Embassy officials asked waitlisted families to come to the airport, he said.

An update on the US Embassy website says repatriation flights have been paused, in order to assess ongoing demand and determine what degree of assistance may be needed as Indian authorities lift lock-down restrictions.

“We will notify all those who have registered requesting a seat on a flight as flights resume, but as previously stated in our messaging, please be aware that there is no certainty that flights will continue at the same pace and regularity as over the last month.  Those who wish to depart should consider seriously the next invitation for a flight, as flights will not continue indefinitely,” the update says.

The flights would likely follow the same route as previous flights: New Delhi to San Francisco, and Mumbai to Atlanta.

The US Embassy says it has successfully repatriated more than 5,100 travelers from across India to the United States.

The tech professional hopes the Government of India will come to the rescue of his family and others caught in a similar situation.