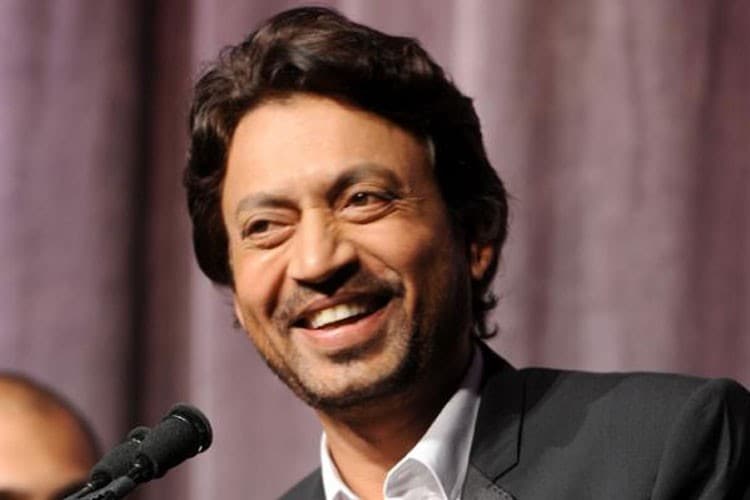 IRRFAN KHAN (JANUARY 7, 1967 – APRIL 29, 2020) ,Sahabzade Irfan Ali Khan seriously nurtured the desire to be a cricketing hero. In smalltown India, where cricket and cinema are the twin intoxications that normally drive notions of heroism, the young boy of a tire seller in Jaipur couldn’t realize the dream, so he shifted focus to acting, his other passion that he had been honing doing street theatre.

It is ironic, actually, that his entry into the field he would never make it big seems far easier, compared to his entry into the field that would eventually give him fame and fortune. For, the young Irfan from Khajuriya village near Tonk district of Rajasthan was at no time in contention to play in the CK Nayudu Tournament — a stepping stone for under-23 cricket in India. Irrfan could never make it, some say, owing to lack of funds.

His entry into the world of films, on the other hand, was far less of a fairytale story. He faced the camera for the first time in Pravin Nischol’s Doordarshan TV series “Shrikant”, based on Sarat Chandra Chattopadhyaya’s novel “Srikanta” and starring Farooq Shaikh and Sujata Mehta in the lead roles. The show ran between 1985 and 1986, and made very little impact. Irrfan’s big-screen break happened when Mira Nair came looking for fresh and interesting faces in National School of Drama (NSD), to cast in her 1988 film “Salaam Bombay!”. She picked Irrfan, a student at the drama school back then, for a small role. The film went to the Oscars, Irrfan was just about noticed.

What followed is years of struggle. For most of the nineties, he was stuck with forgettable roles in television, ignored by bigtime Bollywood. Those were the days of mainstream perfection in our commercial films, which told tales of the perfect hero setting things right in an unsettled world. Irrfan, with his unconventional face and persona, would seem too outlandish to be a hero. His rich voice and screen presence matched any screen villain’s, but at that point of time he was considered too young to be the traditional bad man.

Back then for a male actor in mainstream Bollywood to make a mark, you had to be either hero or villain. Irrfan was a misfit for both. There were a few interesting roles in the arthouse and crossover circuit ï¿½ Basu Chatterjee’s “Kamla Ki Maut” (1989), Govind Nihalani’s “Drishti” (1990), Tapan Sinha’s “Ek Doctor Ki Maut” (1990), and Akashdeep’s “Ghaath” (2000). But these roles, despite being well-acted out, didn’t give Irrfan the sort of traction he would hope for, to create an impact.

Interestingly, that happened with a ï¿½foreign film’ — which perhaps explains his sustained demand in the international market right till the end. When British filmmaker Asif Kapadia was making his directorial debut in 2002 with “The Warrior”, he was looking for a new face — preferably Indian and unlike any — for the title role. Irrfan fit the bill. The film was an international success, and people who mattered in the film industry had noticed.

A year later, two films released within a span of months would turn the tide for the actor. Tigmanshu Dhulia’s debut directorial feature “Haasil” and Vishal Bhardwaj’s “Maqbool” in 2003 gave Bollywood a very different option in screen villainy. His smalltown goon-politician in “Haasil” and the brooding don in “Maqbool”, a Bollywood revisit of “Macbeth”, gave screen menace two very different hues.

It was the early 2000s, Bollywood was undergoing a churning, with new faces being welcomed. Most importantly, the advent of multiplexes had thrown open the genre of realism in entertainment. Actors like Irrfan were suddenly in demand. Over the next years, roles in “Life In Aï¿½ Metro”, “Rog”, 7and 1/2 Phere”, “Sunday” “Mumbai Meri Jaan” and “New York” worked at propelling his popularity.

The big bang role in Bollywood would come in 2012, with “Paan Singh Tomar”. Tigmanshu Dhulia’s remarkable real-life story of an athlete who becomes a dacoit under circumstances needed an actor who could be vulnerable and resilient at the same time, in projecting a complex torrent of emotions with understated ease. Irrfan’s effort won him a National Award as Best Actor. It also underlined an important fact that had been happening through the years — the actor was a brand on his own accord, not a mere prop in big productions for major commercial stars.

What worked for Irrfan in setting up his unique brand power was the fact that he managed to crack the international scene after “The Warrior”. Michael Winterbottom’s 2007 release “A Mighty Heart” saw Irrfan essay a Pakistani cop in the grim account of journalist Daniel Pearl’s killing. The film did not work, but when you play an almost parallel role in a film starring Angelina Jolie, you get noticed worldwide. The immediate outcome was his turnaround project — Danny Boyle’s 2008 global blockbuster “Slumdog Millionaire”. The film’s success and massive Oscar haul made everybody associated with it famous. Hollywood, forever looking for exotic faces, suddenly found a viable deal in Irrfan.

It helped Irrfan for two reasons. First, Indian and Asian origin directors such as Mira Nair and Ang Lee, with Indian and Asian characters, had grown in stature in the West. This translated to important roles in films such as “New York I Love You” (2009) and “Life Of Pi” (2012). Secondly, Indian roles in mainstream Hollywood projects were no longer about playing the cabbie. The age of inclusion was upon Hollywood, and Irrfan bagged pivotal roles in “The Amazing Spider-Man” (2012), “Jurassic World” (2015), and “Inferno” (2016), besides voicing Baloo the bear in “The Jungle Book”.

At the same time, in veteran director Marc Turtletaub’s 2018 Hollywood drama “Puzzle”, Irrfan finally got to play the hero, opposite Kelly Macdonald. The film won critical acclaim and found favour among the niche audience.

Irrfan’s finest hour — in Bollywood as well as Hollywood — was just. Which makes his demise an irreparable loss for us, on the other side of the screen.

The 53-year-old actor is survived by his wife Sutapa and their sons, Babil and Ayan. For the record, the actor has been ailing ever since he was diagnosed with neuroendocrine tumour a while back, and has been under medical attention for the same.

For his fans, Irrfan will live on. Incredibly, on the screen.