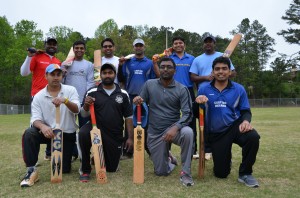 Atlanta, GA: For hard tennis ball cricket enthusiasts in Atlanta and its suburbs there is no dearth of live cricket action. East Roswell Park was the venue of this year’s curtain-raiser events. Atlanta Cricket League (“ACL”) 2013 season started with a bang with the SVK Systems ACL Knock Out Spring 2013 Finals and the inauguration of the Paramount Software ACL 2013 League Championships.

The Paramount Software ACL 2013 League Championship will be played over 6 months, with 76 participating teams in the nine-a-side hard tennis ball cricket. The ACL League Tournament has become the bedrock of Atlanta summers and an obsession for the diaspora of cricketing nations. 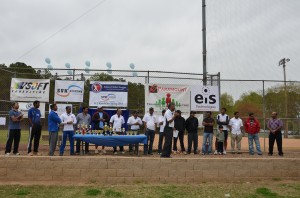 The SVK Systems ACL Knock Out Spring 2013 Finals was played between Corpteq Indians and Gallega Blazers. Batting first, Gallega Blazers managed a score of 76 runs in their allotted 10 overs, with the help of Raj Shankar’s 56 in 33 balls. Corpteq Indians, riding on a swashbuckling knock of 54 runs in just 21 balls by Chaintanya Tatikonda, surmounted the Gallega Blazers total with 4.2 overs to spare. Chaintanya Tatikonda deservingly received the man of the match award for his splendid batting performance in the finals.

Speaking at the award ceremony, the Guest of Honor, Mr. Hanuman Nandanampati, CEO of SVK Systems, the title sponsor of the ACL Knock-Out Spring 2013 tournament, congratulated the participants and said “I am proud to sponsor this very competitive tournament and congratulate both teams on their performance today”. 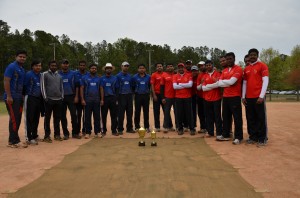 The SVK Systems ACL Knock-Out Spring 2013 Finals were followed by a slug-fest as the big-hitters of Atlanta Cricket League competed in the SVK Systems ACL Super Striker 2013 tourney. Competing with both man (bowlers) and machine, it rained sixes and fours as 10 finalists hit the ball all around the park.

In the final face-off, Abhijit Katragadda of Corpteq Indians got the better of Sanjeev Kotha of RapidIT Royals, to be crowned the SVK Systems ACL 2013 Super Striker.

The day culminated with the Guest of Honor, Mr. Pramod Sajja, CEO of Paramount Software, the Title Sponsor of the ACL 2013 League Championships, officially inaugurating the 15 over a side main league season. “With 28 teams comprising the ACL Premier League and 48 teams comprising the ACL Star League, this is the biggest annual cricketing event hosted in the city of Atlanta, and we are proud to be the title sponsor for the second year”, Mr. Sajja noted.

The ACL League provides an opportunity for more than 1200 players to showcase their cricketing skills. Atlanta Cricket League (“ACL”) was formed in the year 2007 to provide organized participation for casual cricket players and cricket enthusiasts all over metro Atlanta and North Georgia. ACL provides a perfect platform to satisfy the cricketing appetite for all cricket lovers, irrespective of their age and skill.

Professionally managed and promoted, ACL organizes competitive and exciting cricketing events that bring families and communities together. This includes the spring knock-out tournament, league championships, kids coaching camp/league, and charity fund raisers in the fall. ACL is a non-profit 501(c)(4) organization with over 1200 active members from over 76 different teams, playing and organizing the game of cricket. Continuous improvisation has enabled ACL enter its 7th year.