Atlanta, GA: The sky snowflakes and ground ice melted away and freezing temperatures gave in to comfortable 57 degrees as if the Gods were pleased and virtually blessed the inauguration of Atlanta chapter for American India Foundation (AIF) as it unfolded earlier this year in Atlanta.

The who’s who of Atlanta congregated at the wonderfully anointed Smokerise Country Club. After a 45 minute networking, the event started with welcome remarks by Mugdha Gangopadhyay AIF’s Development Officer.  After she introduced Amitabh Sharma, Chair of Atlanta Leadership Council, Sharma took the audience through a plethora of stories embarking upon a journey originating in a remote Indian village through industrial township to city and back to village before finally terminating in the corridors of the US. Amitabh’s powerful narrative dwelled lucidly on 6 case studies. The highlight of the remarks were the incredible opportunity that AIF presents to those with altruistic motive and a great return on investment for those that just wish to contribute to the uplift of India’s rural impoverished. Either way the payback is attractive in terms of availability of a young and skilled trained labor force aside from humungous employment avenues and a burgeoning middle class….a virtual win-win for all. 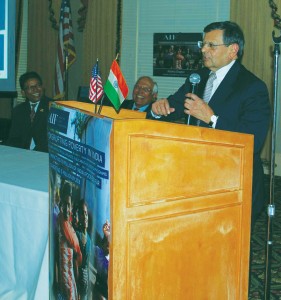 Congressman Hank Johnson delivered the keynote address and touched upon the salient features of the AIF model and capped his remarks with the significance of bridge building between India and the US. He expressed amazement and satisfaction in $84 million have been raised in the US and invested in India by AIF thus far.

This was followed by Pradeep Kashyap (Kash), AIF’s Vice Chairman as he provided insight into the humble beginnings at AIF, subsequent to 2001 Gujarat earthquake and the evolution process centrally as well as via chapters.

Kash was followed by Ravi Kumar, CEO at AIF, who started with a short AIF movie and then took the audience through a detailed corporate presentation.

Amongst the luminary speakers was Professor Jagdish Sheth, Charles H. Kellstadt Chair of Marketing in the Goizueta Business School at Emory University.  He charmed the audience with his excellent analysis of how Atlanta was strategically positioned, how sharing of trade between US and India, commerce and business promotion made absolute sense. He elaborated how Atlanta was deeply philanthropic but had not been explored professionally. He also alluded to how Atlanta and India could be effectively connected. He wrapped up his remarks with his belief that Amitabh’s persistent and persuasive leadership would take AIF to new heights and that he had full faith in the AIF model and that he would support AIF wholeheartedly.

Allen Judd, a leading management consultant and social activist, in his remarks, dwelled upon how AIF’s tried, tested and credible proven mechanism would attract large corporate houses like Coca Cola, UPS, Delta, Home Depot etc. He also pointed out that big donors and other small donors who were looking to have good utilization of their charity money in worthwhile projects would be attracted to AIF. It made sense, he said, to invest in India’s poor.  He also talked about two-way bridge which will bring more donors to AIF in true spirit of organization’s name. He committed his dedicated efforts in steering AIF to success.

Notably, even though Dr. Beheruz Sethna, Ex- President and CEO of the University of West Georgia could not be personally present due to family commitment, yet he was very active in helping Amitabh in the formation of the Atlanta chapter.

It is worth a wonder as to why the launch coverage comes now. Amitabh Sharma, in the interim, wanted to have first-hand experience of the projects in India to emphatically portray what AIF stands for. During his two month sojourn, he personally experienced three AIF programs – education (digital equalizer- DE), livelihood (skill based training- MAST and Rickshaw Sangh) and youth leadership across India and the US. To sum it up, what he saw was overwhelmingly convincing especially the passion and compassion with which all the programs are run and the intensity with which the beneficiaries assimilate each act of benevolence that is so reverently delivered by AIF.

It is heart rendering that AIF is doing incredible service to humanity and touching and uplifting underprivileged lives in areas and ways that is redeeming.

US house resolution commits to working with new Indian government