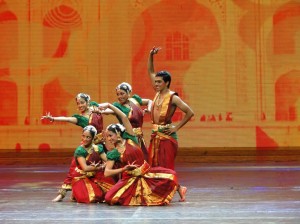 Atlanta, GA: Atlanta based Bharathakala Natya Academy was invited by the Chinese Government to perform in the International Dance Festival in China. The team comprising of  Shreya Viswanathan,  Harini Indrakrishnan, Ishwarya Venktachalam, Nantheshan Sudarshan and Subathra Sudarshan performed in the three day international festival of indigenous music and dance in July. The team was led by Subathra Sudarshan who is the founder and artistic director of Bharathakala Natya Academy and artistic director of Third Eye Dancers.

Bharathakala Natya Academy presented two scintillating dance performances during the three day festival. The first dance item, ‘Bharatham’, was a classical Bharatanatyam piece with brilliant and complicated rhythmic nritta patterns in sequences of scintillating dance movements and intricate footwork. The colors of the costumes, the form and style of the dancers and beauty of the dance form captivated the audience at large. The second piece presented was fusion displaying the versatility of Indian dance form. The energy and elegance of this dance piece was a treat to the Chinese audience who were mesmerized by the beauty of the Indian dancers.  Both the dance pieces were exclusively choreographed for this festival. Talking about the experience, Subathra said, “This was an amazing opportunity to share the stage with international dancers and share this divine art and our culture with people of China. This festival has brought together artists from all over the world and weaved together a beautiful  fabric  which cannot be expressed in words.”

The three day festival was attended by more than 4500 people and was very well received. In fact, subsequent day’s tickets sales were boosted by Bharathakala’s performance and people surged to watch Indian classical dance at its best. This event was extensively covered by provincial and national Chinese News papers including Guizhou times and were also interviewed by Television Channels.

The dance performances were a huge hit with locals who couldn’t get enough of the dancers and dance. The dancers were stopped on the roads to get a glimpse and a chance to get pictures taken with them. In addition, Bharathakala dancers were special invitees to the International economic forum conference where several world leaders spoke including former prime minister ofAustralia, Prime minister of Malt and several other world leaders.

BharathakalaNatyaAcademyis a primer Indian Classical dance institute in  Atlanta. Subathra Sudarshan is a versatile Bharatanatyam dancer, teacher and choreographer with many notable performances in her repertoire. She learnt under the tutelage of  Padmabushan Sri V.P. Dhananjayan and Padma Bhushan Shantha Dhananjyan, at their distinguished dance school, Academy Bharathakalanjali. She was also awarded the title ‘Naatya Poorna’ by her Gurus. Her association with Bharathakalanjali enabled her to showcase her talent in Dance Dramas performed acrossIndiaandUK. She has successfully staged many dance dramas and charity fundraisers inEngland, North America andSouth America. She is highly respected for her exceptional teaching style and lauded for her remarkable choreography. Subathra was awarded ‘Natya Mayuri’ by spiritual Guru Srinivas Arka. In 2013, Naadhabrahmam awarded the title of ‘Nrithya Sevika’ for her exemplary work in Bharatanatyam. Georgia Association of Physicians of Indian Heritage awarded ‘Humanitarian Award 2014’ for her tireless community service through dance.