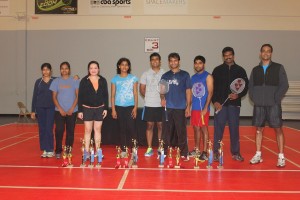 Atlanta, GA: Atlanta Badminton Club held its first badminton tournament, the Diwali Cup 2013, at its courts in Roswell, GA. Organized by Chandra M. Sivalingam of the club, the week-long tournament commenced on November 9th and ended on Saturday, November 16th.

Consulate to celebrate International Day of Yoga on June 26