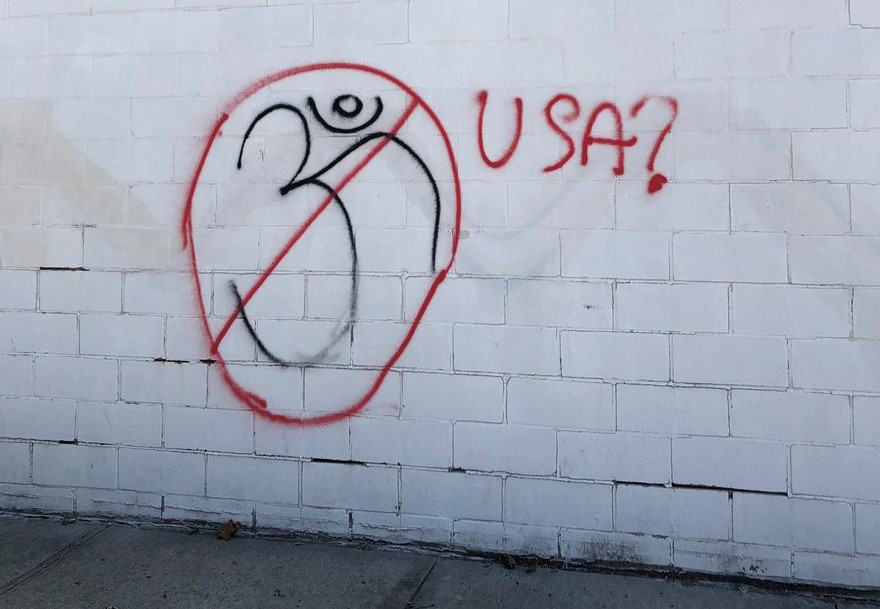 The spray-painted graffiti, which features a red line drawn through the Hindu syllable “Om”, comes at the heels of beating of a Hindu religious leader last month in Queens.

According to reports in 2015; 40 Hindu religious flags were burned outside a home in Queens on Thanksgiving Day.

Rajan Zed, President of Universal Society of Hinduism, in a statement in Nevada today, said that it was shocking for the hard-working, harmonious and peaceful US Hindu community numbering about three million; who had made lot of contributions to the nation and society; to receive such signals of hatred and anger.

CVS Pharmacy President Kevin Hourican should apologize to the community for reported delay in removing the graffiti in this neighborhood store, Rajan Zed indicated.

Zed also urged leaders of various religions and denominations in New York City to strongly and openly condemn this hateful incident and extend their support to the area Hindu community.

Zed urged fellow Hindus nationwide to educate fellow Americans about Hinduism, the oldest and third largest religion of the world with about 1.1 billion adherents; and try to remove any misconceptions about it. “Om” is the mystical syllable containing the universe, which in Hinduism is used to introduce and conclude religious work.