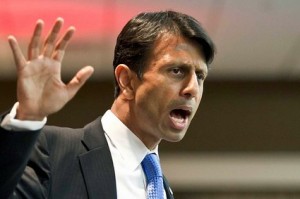 The group called “America Next” would produce detailed proposals for how conservatives would improve health care, education and energy policy if they were in charge again, Jindal told Politico, an influential politics focused Washington news site.

Jindal, whose term as chairman of Republican Governors Association ends next month, complained that his party has focused excessively on criticising President Barack Obama without saying what it would do instead.

Citing Mitt Romney’s failed effort to make the 2012 election a referendum on the president, Jindal, 42, said his group will bring together big thinkers to “play offense in the war of ideas.”

When asked about his plans for 2016, Jindal said: “I don’t know if I’m going to run for president or not.”

He quoted former British Prime Minister Margaret Thatcher, who said that you need to win the war of ideas before you can win elections.

Jindal, whose second term as governor ends at the start of 2016, said “America Next” will not be afraid to take controversial positions that run afoul of Republican orthodoxy.

“Everything needs to be on the table,” he said. “This is not a time to be timid.”

Jindal said there’s a helpful contrast between the paralysis in Washington and the reforms being pursued by 30 Republican governors in the states.

“A rebellion is brewing outside the Washington Beltway,” Jindal was quoted as saying. “The American people know that the policies coming out of Washington are leading us to a dead end.