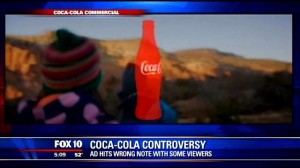 The ad shows “ordinary people of different races and ethnicity doing ordinary American activities, as the classic song plays”, as CNN put it, throughout the ad in English, Spanish, Hindi, Keres, Tagalog, Senegalese French and Hebrew.

“At first glance (it’s) a moving tribute to America’s diversity,” noted the news channel, “Nevertheless it became one of the most polarizing moments of the night” sparking an uproar on Twitter.

“The last thing any of us should want to see is a balkanized America,” wrote Allen West, a former Republican House member, in a blog post as cited by CNN. “Furthermore, it has to be of concern that we have Americans who lack the resolve to take a stand for our borders, language, and culture.”

“Coca-Cola’s ‘It’s Beautiful’ Super Bowl Ad Brings Out Some Ugly Americans,” wrote James Poniewozik in the Time noting, “It took a commercial for a global soda company to prove the ‘speak English!’ crowd wrong about what makes America strong.”

“It was maybe a little sappy, but it was also, well, beautiful, as was the music, sung in a succession of single voices and languages,” he wrote noting, “It was that last aspect that unfortunately, brought out America the Ugly, at least on some parts of the Internet.”

“WTF?” asked one post on Twitter cited by Time. “@CocaCola has America the Beautiful being sung in different languages in a #SuperBowl commercial? We speak ENGLISH here, IDIOTS”.

Time reminded “the xenophobic protestors” that “America isn’t weakened because people don’t submit to a monoculture; it’s strong because it can absorb the peoples and aspirations and talents of the rest of the world without erasing their cultures”.

The ad was meant to showcase the country’s “incredible diversity”, in the words of the soft drink company. But it dredged up multiple hot-button issues for right wingers, said the New York daily News.

These included the ongoing debate over the codification of English as the primary language in the US, immigration reform and the acceptance of same sex relationships in mainstream media.

However, the ad had its supporters among conservatives too with the Heritage Foundation, a high-profile conservative think-tank, tweeting out support for the ad Sunday night.

“Coke apparently thought a spot featuring a multilingual rendition of ‘America the Beautiful’ would be, well, beautiful,” wrote the Los Angeles Times.

“But beauty, as we all know, is in the eyes (or ears) of the beholders. And behold, Coke found that this nation of immigrants can also be a nation of bigots, racists and the just downright dumb,” it said.

“How else to explain the folks who took to Twitter and social media to object? Using bad language and everything,” it asked.