Atlanta, GA, October 11, 2018: Scents of Sandalwood engulfed Berkmar High School this September 8th as the Kannada community in Atlanta gathered together to celebrate the 45th anniversary of Nrupathunga Kannada Koota (NKK) with much fanfare.

Brimming with verve and drive, the event featured poplar movie personalities including actor Srinath, lyricist, poet and modern Kannada literature connoisseur Jayant Kaikini from India, State Rep. Mike Glanton, and writer Jayashree Deshpande as guests of honor. The all-day event also showcased Yakshagana by team Yakshamitra, dance performance by visiting artist Sneha Narayan, musical evening by Praveen D Rao and his team, magic show by Kowshik Muralidhar and an elaborate mythological production by local artists. A commemorative souvenir, Chiguru, was also released at the event. Emcees Shruti and Dakshita anchored the event with smiles and enthusiasm. A highlight of the event was a sumptuous spread of authentic Karnataka delicacies served all through the day.

Founded in 1973, NKK was originally intended to provide a meeting ground for fellow community members to share the joy of festivals and occasions that bind the people of Karnataka. On the heels of its 45th anniversary, NKK certainly has come a long way, donating to charitable causes through its fundraisers and being actively involved in community services.

“NKK has completed 45 successful years in upholding the glory of Kannada and Karnataka’s Culture. We will plan to work on engaging folks from all age groups that will help us to build a strong platform for the fellow Kannadigas of Greater Atlanta Area,” said Santosh Kumar, president, NKK. 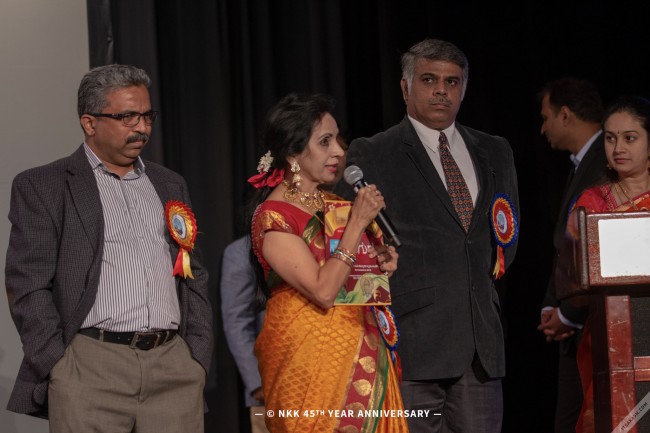 The festivities kicked off with the traditional invocation song presented by ensemble of Auburn Musical Team.

“NKK works on numerous projects outside the Kannada community to include Habitat for Humanity. They seek to participate in efforts for betterment of the State ofGeorgia, local communities and people of this region and wish to grow as a model for other such organization,” said Rep. Glanton in his Inaugural address, noting that NKK had grown beyond a cultural organization while staying non-profit.

“NKK has put together a fantastic program bringing the Kannada community together,” noted actor Srinath.

“Nrupathunga Kannada Koota, the Kannada community, the Kannada environment that has been nurtured for 45 years is a celebration indeed! The grand celebration today stands testament to the dreams, sacrifices and patience from the older generations, the vivacity of the young men and women, families who have worked together to cultivate Kannada sensitivities blossom, breathe and prosper beyond native shores,” said Kaikini.

“The BOD/EC team really worked hard to make it a very nice and successful event. We had several artists, musicians, authors and actors from India as guests. Local talents also performed very well. Yakshagana team Yakshamitra fromCanada was outstanding.  We had wonderful Indian food throughout the day, including breakfast. Overall this was one of the best functions we have done for Kannada Koota in Atlanta,” said Dr. Subra Bhat, who is on the board of directors.

The Souvenir Chiguru bearing congratulatory messages from various spheres- politics, spiritual and the movies, including Gov. Nathan Deal, The Consulate General of India, Atlanta, Swami Nirbhayananda Saraswati, President of Ramakrishna Matt, Lyricist, poet, author Jayant Kaikini, Popular cine actor Puneet Rajkumar was released by Jayant Kaikini and Jayashree Deshpande. Members of the souvenir committee, the sponsors, and members of NKK BOD and EC were recognized. Annapoorna Bhat, editor of Chiguru thanked everyone involved, including volunteers who clocked in countless hours to put the event together.

Following a spectacular dance performance by visiting artist Sneha Narayan, Kowshik Muralidhar had kids and adults hooked with slick tricks up his sleeve. His cleaver usage of Mankutimmana Kagga was a treat for the mind, body and soul. Energetic dance performances and engaging music by local artists entertained the audience. A grand ensemble, Lanka Dahana, a legendary chapter of Ramayana was enacted with panache by local team. 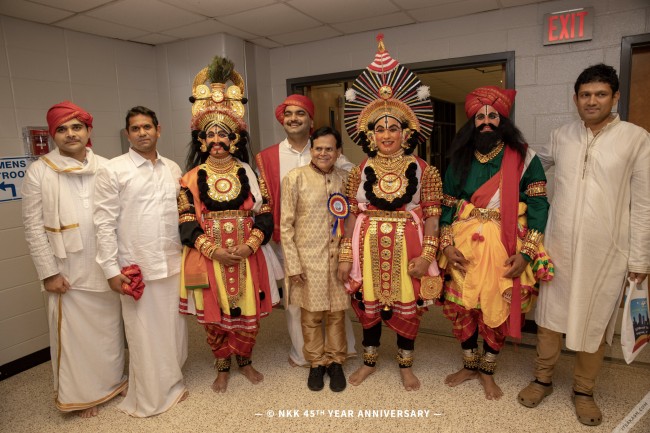 “We are very grateful to all the people who have started and nurtured Kannada Koota in Atlanta for all these years, their relentless hard work and sacrifices have made all Kannada people in metro Atlanta to come together for years. Hence, we have a great responsibility to make our community stronger for 50 more years! My family and I feel immensely happy and fortunate to be part of this great celebration,” said Pradeep Vittalamurthy, chairman.

Rooted in folk tradition, with resplendent costume, intricate face painting, majestic movements and mesmerizing music, Krishna Sandhana, a Yakshagana, the traditional dance theatre presentation, with origins from the coastal region of Karnataka offered so much more than a section of Mahabharata. Team Yakshamithra’s in-depth analysis of the politics of war, moralities, with comprehensive introspection and arguments betweenKrishna and Duryodhana that eventually lead to the war, laced with humor, added effervescence to the event.

The night ended on a high note with riveting and rhythmic music by Praveen D Rao, Ajay Warriar, Varijashri Venugopal, Manjunath N S, and Pranav Swaroop. Using the backdrop of Kodagu, the team presented awareness about the flood relief efforts in the area. Serving traditional Karnataka delicacies throughout the day with cultural and traditional performances from artists local and abroad, even as they try to raise funds for flood relief in Kodagu, the anniversary celebrations marked the beginning of many more splendid jubilations the future beholds.