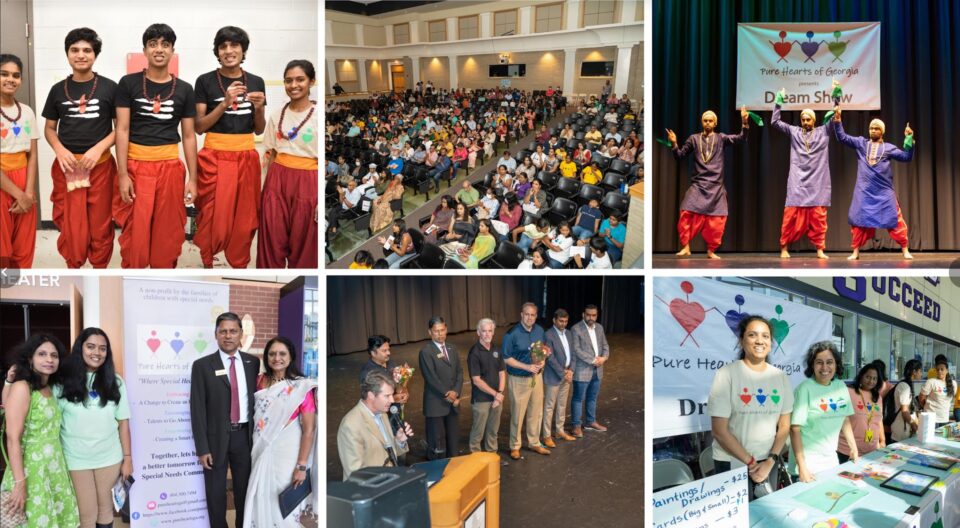 Atlanta, GA, October 7, 2022: Pure joy emanated in the halls of Duluth High School Theater as 60 special needs kids of Pure Hearts of Georgia sparkled on stage bringing alive their Dream Show, on September 18, 2022.  A culmination of practice, patience and perseverance, the show was a triumph of the indomitable human spirt.

Autism spectrum disorder (ASD) is a developmental condition that affects a person’s ability to socialize and communicate with others. People with ASD can also present with restricted and/or repetitive patterns of behavior, interests, or activities. The term “spectrum” refers to the degree in which the symptoms, behaviors and severity vary within and between individuals.

Their limitations notwithstanding, the spirited 120-minute lineup of thirteen routines included heartwarming Ramp walks and endearing Group performances. The event also featured a delightful display and sale of the artwork and other crafts the kids had created.

A child/adult with ID (Intellectual Disability) has to battle their sensory issues relating to visual, auditory, olfactory, balance (vestibular), awareness of body position and movement (proprioception), awareness of internal body cues and sensations (interception) to learn any routine – and getting them all to the stage which can be an intimidating environment, for anyone in fact.

So how did the parents put it altogether?
“Dream show – as the name suggests few years ago was still a Dream!” Anandhi Jambunathan, founder, Pure Hearts of Georgia told NRI Pulse. “Lot of us think this show is about Children and adults with disabilities getting an opportunity to shine on stage. Yes, but it is also so much more ! It is not just about the 60 individuals on stage but their parents and caregivers / siblings , volunteers’ tireless effort to meet and rehearse the routines for weeks before the show!” she adds.

Pure Hearts of Georgia was founded by Anandhi Jambunathan, with Annapoorna Somayajula and Chelvi Selvanayagam as co-founders. Anandhi and her husband Ganesh Krishnamurthy have been actively supporting families of children with special needs in and around Atlanta for more than 15 years. Their son Krishiv is autistic.

The United Nations declared April 2 as World Autism Awareness Day, which was adopted on December 18 of 2007, to encourage member states to take action in raising awareness about people with autism spectrum disorder and support the research finding new ways to improve wellness and inclusion. The Autism Society of America in 2021 took to social media to assist it in changing the title to Autism Acceptance Month. The shift in terminology was aimed to foster acceptance through improved support and opportunities in education, employment, accessible housing, affordable health care, and comprehensive long-term services.  While it is sadly true that parents and autistic kids struggle often experience social rejection from their neurotypical peers, the perspective in which these things are the fault of Autism itself fails to reflect on the society that is aggravating these problems rather than supporting inclusion, understanding and acceptance. Many of the difficulties that Autistic children and adults deal with would be drastically reduced if people around them simply understood their different neurobiology and accommodated it. So acceptance plays just as critical role as awareness.

An event such as the Dream Show, that showcases autistic kids cheered on by neurotypicals provides a unifying platform to appreciate and accept each other better.

“This show brought the whole community together. It is such a lovely opportunity for our individuals to hangout and learn from their typical peers and adults to perform a routine! It is a lovely opportunity for families with special needs individuals to come together, meet new families and create routines for their children to perform on stage! And when our individuals take the stage and the whole auditorium cheers for them, it is so emotional and moving for our families and friends and they get a sense of recognition and acknowledgment!” Jambunathan said.

“Dream Show is so heartwarming and emotional!! Kudos to all the parents, volunteers and the amazing kids who made this show such a huge success!! The auditorium was fully packed and was filled with great energy from the performances and also  with audiences cheering all the Pure Hearts throughout the show. Wishing this amazing organization great success!! Paramount Software Solutions is privileged to be associated with Pure Hearts of Georgia,” Pratima Sajja, said.

“It was an amazing show. I’m so impressed by the talent of these kids,” Bhavini Rajan remarked.

Dream Show was a delight to watch, and I was part of the full house audience. I was inspired to see children of various disabilities train themselves to practice and push themselves to get ready to perform for us. It required discipline and hours of practice, not to mention motivation and enthusiasm. I came home very motivated to demonstrate dedication to my own life’s projects just like these young children, seeing them overcome challenges, big and small. Stage fright was completely missing which really made me emotional because they were strong in that moment of performance, and they didn’t miss a beat. I will be returning every time. It was a pure dose of happiness for me,” Meghana Naik, commented


“God’s creation is never flawed- its special.  The Dream Show was a magical event. Kudos to all the parents, for the weeks of work it involved,” Bob Erramilli, Council, City of Johns Creek said.

John Bradberry, Mayor, Johns Creek, Dilip Tunki and other members of Johns Creek city council including Himanshu Karnwal and Special Olympics Coach of the Year Martin Jelleme were in the audience,among so many others, cheering on.

As I walked out, I couldn’t help but ponder about how we can easily we can celebrate all neurotypes for the rich diversity they contribute, respect all forms of communication be it sign language, gesture, or devices, and shed our judgements about tone and body languages. What a wonderful world that would be! Let’s try to create it. Let’s give everyone a Chance to Dance!

GATeS Bathukamma celebration is a riot of color and fragrance

Bollywood actresses, who were once the reigning queens of negative roles