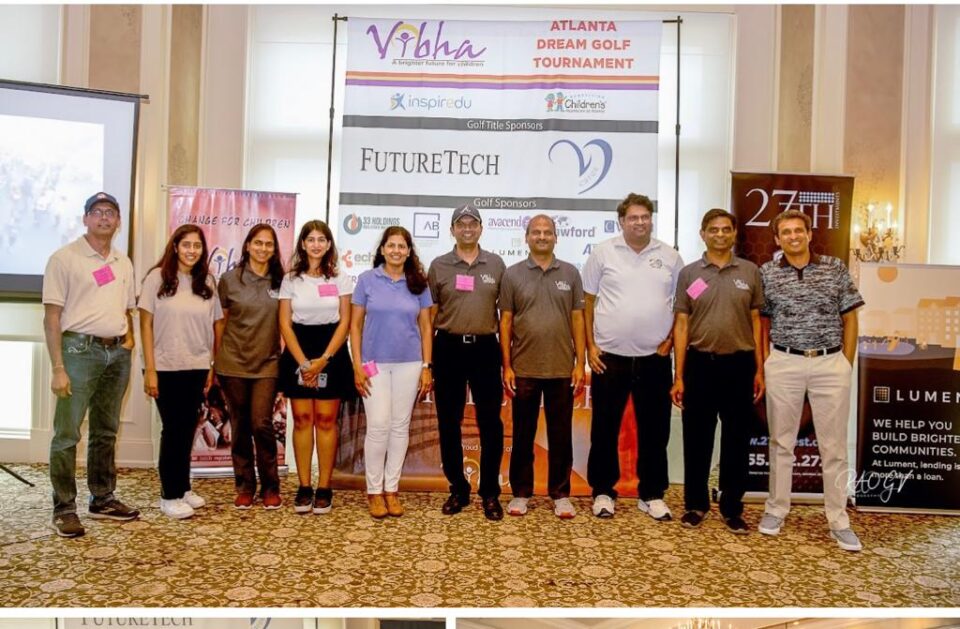 Atlanta, GA, July 15, 2022: As the sunlight filtered through the trees at St. Ives Country Club the morning of June 27th, the excitement on the course could barely be contained. Eighty golfers, as well as dozens of volunteers took to the beautiful fields to commence Vibha’s Dream Golf Event – a new undertaking by Vibha to create more fundraising opportunities to aid underprivileged children in India, as well as local organizations, like CHOA and InspiredU.

The Best Ball Scramble format saw a fierce battle amongst all the 20 teams with the winning score going all the way to -20. There was also tough competition for the longest drive, closest to the pin and an opportunity to ‘beat the pro’ who was a LPGA player.

Vivin Vaid, a retired Indian Navy Officer and an avid golfer, spearheaded this event for Vibha due to his passion for golf and the people in it. “There is so much to learn from these unique individuals – compassion, camaraderie, empathy, sensitivity, or just sheer fun and laughter.” he fondly says of his fellow golfers, “They’re kind souls who count their blessings and recognize there is another world which needs some extra help”. Many months of hard work went into the event, with many Vibha volunteers working behind the scenes, contacting sponsors, organizing and coordinating with the players and location, and advertising on social media. “Vibha volunteers made sure that no stone was left unturned. Their sheer hard work made this event a huge success,” Vaid said of his team.

Everyone’s efforts were handsomely rewarded with a wonderful event. Other than golfers from the Atlanta metro area, multiple companies flew in participants from Chicago, Charlotte, and Columbus to join the tournament. Industry Captains, CEOs and VPs of numerous major companies also attended the event, making it a great opportunity for networking and creating connections. The tournament was followed by speeches by some of the event’s title sponsors, a lunch banquet, and a prize distribution ceremony. All in all, it was an unforgettable event, for both the participants and the volunteers. Raj Vuchatu, the executive director of Vibha Atlanta, and the lead coordinator of this event, reflected on the success of the event, saying “It was a grand success, not only because we raised funds for the cause, but also because we were able to introduce Vibha and its vision to many new supporters. We had great participation, 82 players, 25 sponsors and marching towards 75k to be raised from this event.”. Sravan Vellanki, president of FutureTech, the title sponsor for the event, also gave his regards to the team, saying “A big shout out to the volunteers of Vibha for making it a great experience and for a great cause.”

The Vibha team also wanted to thank the St. Ives Country Club for hosting the tournament on their beautiful golf course. Their support was vital to the flawless execution of the event. “Having grown in confidence, I am sure the Vibha team will take this marquis event to the next level for future editions.” said Vivin Vaid, who has already begun thinking about next year’s tournament. For now however, the main team’s attention is turned to Vibha’s flagship event – The Dream Mile, which will take place on September 25th this year in Cumming, bringing in thousands of runners and walkers from all over metro Atlanta to participate – another event that’s not to be missed.