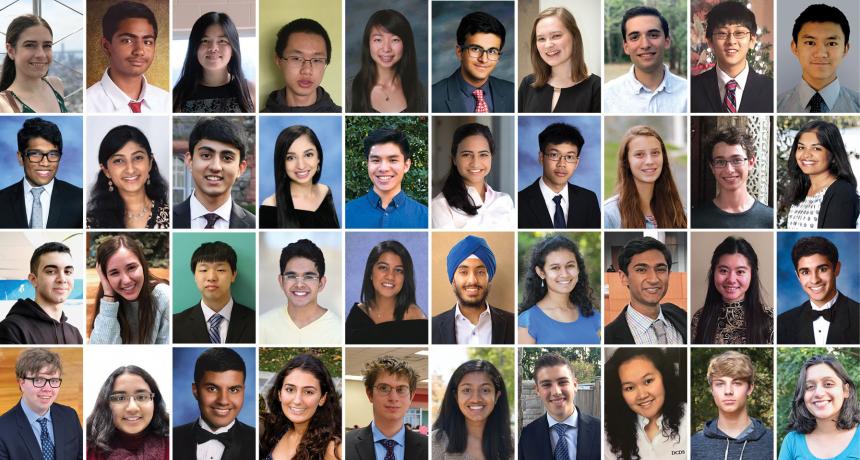 The recipients of the award are Anjali Chadha (16) of Kentucky, Preeti Sai Krishnamani (17) of Delaware, Navami Jain (17) of North Carolina and Sai Preethi Mamidala (17) of Pennsylvania, the American Bazaar daily reported.

The four teenagers are all finalists of this year’s Regeneron Science Talent Search, the nation’s oldest and most prestigious science and math competition for high school seniors.

The recipients of the award are Anjali Chadha (16) of Kentucky, Preeti Sai Krishnamani (17) of Delaware, Navami Jain (17) of North Carolina and Sai Preethi Mamidala (17) of Pennsylvania, the American Bazaar daily reported.

Chadha has built a device that is a sensor for detecting arsenic, a harmful substance known to cause cancer, in well water sources.

Currently a student at duPont Manual Magnet High School, Chadha was inspired to develop the sensor when she discovered that groundwater within 90 miles of her home was contaminated with arsenic.

It is estimated that some 50 million Americans use well water as their primary source and could be at risk for contamination.

For Krishnamani, the goal was to combat arsenic contamination in rice.

“The way I am trying to do that is by enhancing soil minerals that can bind up arsenic and make it inaccessible to rice plants,” she told the American Bazaar.

Her solution is silicon amendments – rice husk and rice husk ash – which are waste products of rice production and can be recycled into paddies to eventually combat arsenic contamination in the crop.

Jain performed a series of evaluations looking at different ways to produce bio-ethanol, a type of bio-fuel that is considered greener to conventional fossil energy sources as it is biodegradable and non-toxic.

“The major controversy around ethanol production is that it is being produced from food-based crops like corn. I’m looking at ways to produce it from agricultural-based matter and different waste products such as wheat straw,” she said.

Her results indicated that producing bio-ethanol from wheat straw may increase efficiency and lower costs.

Driven by the effects of fossil-fuel pollution in India, Mamidala studied an optimal catalyst to make renewable energy more accessible.

A senior at Garnet Valley High School in Glen Mills, she examined the catalyst in “a fuel cell that can store energy while it is being produced and generate it when it is needed. The actual catalyst being used in the fuel cell makes a world of difference in its performance”.

Kesari is the best war film India has produced