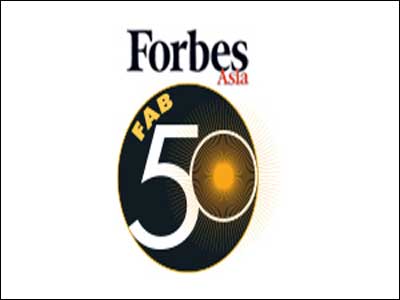 China boasts the most companies on the list, as it has for the last three years. But the number fell to 16, down from 20 last year and 23 the year before, according to the list published in the web edition of Forbes Asia.

China’s tech companies made a strong showing, with Tencent the most valuable, having a market cap of $155.6 billion, nearly twice that of runner-up India’s Tata Consultancy Services.

Lenovo is the biggest in terms of annual revenue of $38.7 billion, just edging out India’s Tata Motors. India trails China with 12 companies on the Fab 50 list, the same number as last year.

HDFC Bank, the country’s second-largest private sector bank, appears on the list for the eighth year, the most times of any company on the list since Forbes began compiling this roster in 2005.

Mahindra & Mahindra also rejoins the list after a two-year absence.

The Fab 50 companies are selected from a pool of 1,300 publicly listed companies in the region with at least $3 billion in annual revenue or market capitalization, Forbes said.