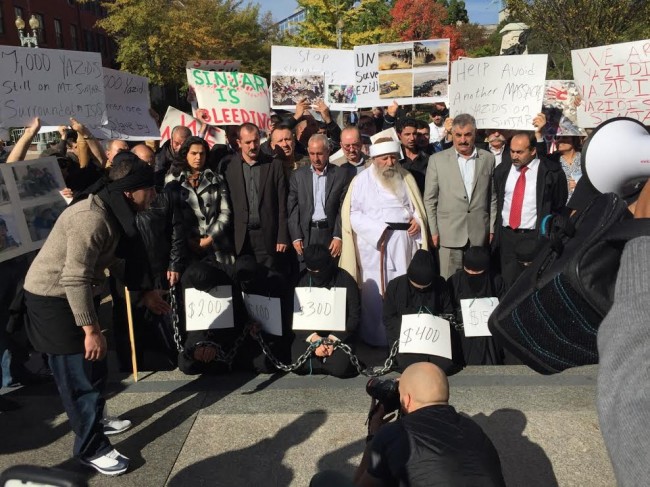 Atlanta GA: Yezidis and Hindus came from across the U.S. to  Washington D.C. on October 24  to protest the thousands of Yezidis who are being targeted in Iraq. Many of their women and girls have been abducted and sold into slavery and their homes and lands overrun by ISIL, which. is methodically targeting them for slavery, conversion and death.

The terror ISIL army has murdered thousands of Yezidis in its rampage across the Middle East.  This week  ISIL has again laid siege to the Yezidi’s Holy Mt Shingal, the last remaining outpost of Yezidi resistance. The truly heroic efforts of the Yezidi, combined with some support from the Iraqi and coalition forces, have so far managed to maintain their hold of the strategic mountain. The situation, however, is a desperate one as the entire mountain is currently surrounded by ISIL. Despite the Yezidi successes in the field they are in a desperate situation, low on ammunition, food, water and other basic supplies. Just two days ago, their most successful military commander Khairi Murad Shex Khider was killed in combat. This loss could have been avoided if he and his troops had not run out of ammunition. 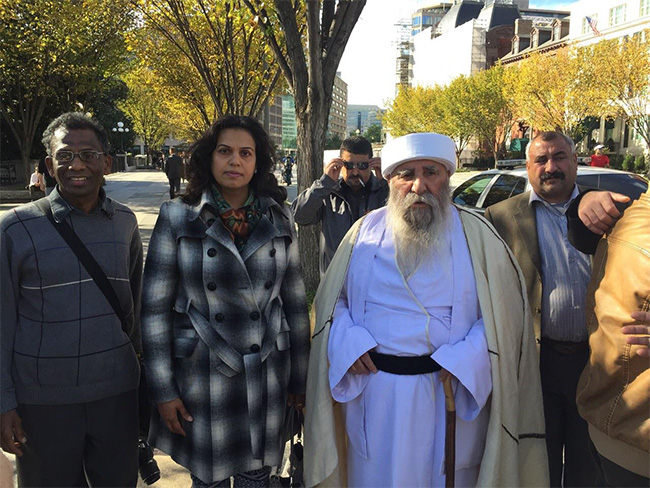 As the world is responding to the ISIL threat, the Yezidis seem to have been forgotten although they are primary targets of the terrorists. There are currently over 7,000 Yezidi women and girls that have been kidnapped and enslaved by the terror group. Thousands of Yezidi men and boys have been massacred and many others forced to convert to Islam literally at the point of the sword. Marked for extinction as ’devil worshiping’ heathens, the Yezidi are shown absolutely no mercy. Lacking the political and military infrastructure of their neighbors, the Yezidis’ plight is being ignored by the world at large.

In an effort to raise awareness among the public and to urge the U.S. government and its’ forty-member anti-ISIL coalition into action, Yezidis from across the USA and Canada gathered in DC for a demonstration at the White House. In a unique display of solidarity, the Hindu community also came out in force joining hands with the Yezidi people. Together they urged the US government to take action. In a vivid reminder of the barbarism of ISIL the protesters reenacted the ‘Sex Slave auction’. Women dressed in Burqas were chained together and ‘sold’ for prices ranging from $10-300 per ‘slave’.

With shouts of ‘Bring Our Women Back!’ and ‘Save Mt Shingal’ the demonstrators urged President Obama to take effective action in defense of the Yezidis fighting on Mt Shingal and to provide assistance in the rescue of the thousands of enslaved Yezidi women and girls.

Coinciding with the protest was the visit of a high level Yezidi delegation from Iraq. Baba Sheik, a leading member of that delegation, joined in the White House demonstration as well. Demonstrators also met with several lawmakers and interacted with the media.

The Yezidi call for action was reinforced by the strong show of support from the Hindu community in the greater DC area. Recognizing in the Yezidis a kindred community confronted by the same challenges and struggles, the Hindu community issued an appeal for donations and humanitarian aid on behalf of the struggling Yezidis. Currently those Yezidis not imprisoned by ISIL are stranded in squalid refugee camps spanning the region from Turkey to Syria and Iraq. As winter approaches the refugees are lacking many basic necessities like water, medicine, sanitation and blankets.

Both the American Yezidi and Hindu communities issued an urgent call for the immediate relief and support for the armed Yezidi resistance efforts on Mt Shingal, the rescue of the 7,000+ enslaved Yezidi women and girls and the distribution of humanitarian aid to the thousands of Yezidi refugees across the region.

People can support the Yezidi by donating to the SEWA USA Yezidi fund. http://www.sewausa.org/files/uploads/2014_Diwali_SewaUSA.html

Indian government should hang its head in shame: BBC filmmaker