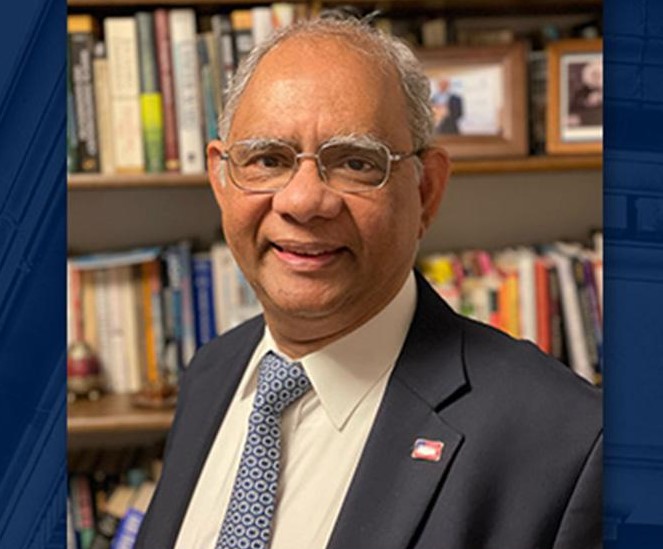 Prof. Lakhtakia accepted the award at the RCA Awards Banquet on Nov. 19 in Atlanta.

RCA brings together professionals from every segment of the wireless industry, with the mission  to promote “cooperation among those interested in scientific investigation in the art of radio communication,” according to its website. The RCA Lifetime Achievement Award “recognizes very significant achievements and a major body of work accomplished over a lifetime that has advanced the art and science of wireless technology,” according to the RCA press release.

Lakhtakia is the sixth person to win the award. The RCA identified Lakhtakia as “an expert in materials and electromagnetic wave modeling that are used in RF stealth applications, as well as in lasers, green engineering and biologically inspired design.” In his more than 40-year career in electromagnetics technology, Lakhtakia has received 43 honors and awards, authored or edited 27 books, refereed more than 940 journal papers and been named a U.S. State Department Jefferson Science Fellow.

“Professor Akhlesh Lakhtakia joins a very distinguished group of five individuals with his Lifetime Achievement Award from the Radio Club of America,” said James Breakall, professor of electrical engineering at Penn State and one of Lakhtakia’s colleagues in electromagnetics research, referring to prior winners Martin Cooper for the invention of the cell phone (2010), Frank Drake of the SETI Institute, Arecibo, Project Ozma (2015), Joseph Taylor who won the Nobel Prize in physics for verifying Einstein’s Theory of General Relativity (2016), Ulrich Rohde for microwave engineering and Rohde and Schwarz (2017) and Henry Richter (2019) for the design of the first U.S. satellite.

“Professor Lakhtakia is a world-renowned researcher for electromagnetic scattering from complex materials. Over these past years, I have been and continue to be very proud to be one of the ‘Three Musketeers,’ working with him and our other friend, Professor Emeritus Craig Bohren,” Breakall added.

Julio Urbina, associate professor of electrical engineering at Penn State and another colleague of Lakhtakia’s, echoed these sentiments.

He also received the 2022 Institute of Electrical and Electronics Engineers Antennas and Propagation Society Distinguished Achievement Award, which he accepted at the AP-S Symposium in July in Denver.

he award is given annually to recognize “outstanding career achievement[s] by an individual in the field of antennas and propagation,” according to the society’s website. Lakhtakia received the award for
“pioneering research on electromagnetic propagation in complex and nanoengineered materials.”

“Akhlesh Lakhtakia is a renaissance engineering scientist for whom no problem is too big or too small to explore,” said Judy Todd, Penn State professor of engineering science and mechanics who worked with Lakhtakia for many years in her role as department head. “He has contributed new insights into electromagnetic theories, pioneered the field of sculptured thin films, developed new opto-electronic devices and inspired current and future generations of students, faculty, teachers and the public-at-large with his visions of how we can all contribute to the advancement of our global society. His mentees have thrived and succeeded beyond their expectations. He epitomizes the credentials of an IEEE AP-S Distinguished Achievement Awardee. His legacy will be the success of all those with whom he interacts.”

Search on for Forsyth burglary suspects